af Michaela Berdougo
Hey folks!
I hope your week is going as well as ours! Lots happening at the moment, and I have no doubt that most of you in Skagen shared the experiences with us. :)
The day started with Mikkel and Rasmus going to Jennes Sø for CES ringing with Henning Ettrup. Very slow bird-wise, but they had a Water Vole (Mosegris) swimming around. :)
Jonas and I went observing at Sandormsvinget, and had already 5 Hobbys (Lærkefalk) on our way there.
He saw Sebastian Klein on the other side of the reeds. "That's Sebastian Klein. Damn, that means something good is going to happen!". Indeed, things were moving, and it was exciting.
A Bee-eater (Biæder) was called out, a Montagu's Harrier (Hedehøg) was flying on the other side of the road, Jonas spotted a Golden Oriole (Pirol), and the final touch, Sebastian Klein called out a potential Bonelli's Warbler (Bjergløvsanger) at Verdens Ende 1. People stayed calm until it was confirmed. Yes, a Bonelli's Warbler (Bjergløvsanger) was singing, right by the net lanes. The decision was made to open them with the hope of catching it, with some help Anders Nielsen.
First round, no birds at all. It was 10:00 am, and already warm. 10:30 am second round. Big bird in the net, from a distance we thought it was a thrush. As I got closer, I realized its big, powerful bill. "Oh my god it's a Hawfinch!!" (Kernebider). First for the season, awesome! 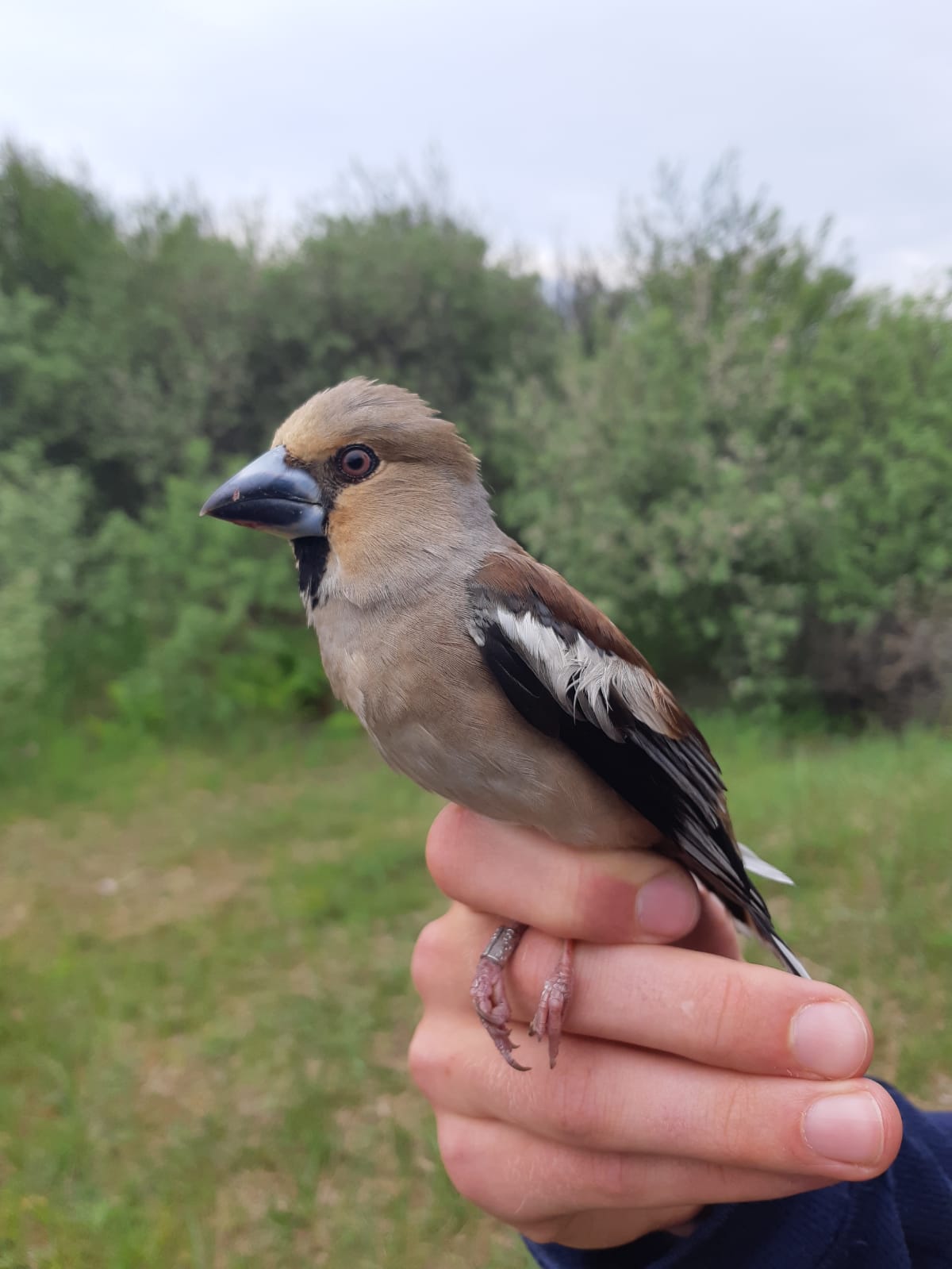 Female Hawfinch (Kernebider)
We continued the round, and when I got to the last net, I saw a bird on the opposite side of the net. Hm, strangely pale Løvsanger-like bird. Earlier on my way to Kabeltromlen, I looked at Collins to see what to look for in case we caught it. White underparts: check. Yellow/greenish edge on secondaries: check. Yellow/greenish rump: check.
"I think it might be it but don't freak out", I say to Jonas arriving. He looks at it, "Fuck, I don't know." - "It's weirdly pale" - "Yeah and look at the rump!". I get it out of the net, take a few pictures that I send to Simon straight away, and while I do so, it sings in my hand. "It's it!!". A bit hard to contain the excitement, we silently scream and do a little victory dance.
We walk all the way back through the water to the tent to pass by very few people as to not cause mayhem before we ring it and take measurements.
Simon calls it out on Zello, with the instruction for people to stay on Sandørm's road as we will bring it out to show when it has been processed.
Jonas ringed it while I ringed the Hawfinch, Simon took the measurements, and out it was. 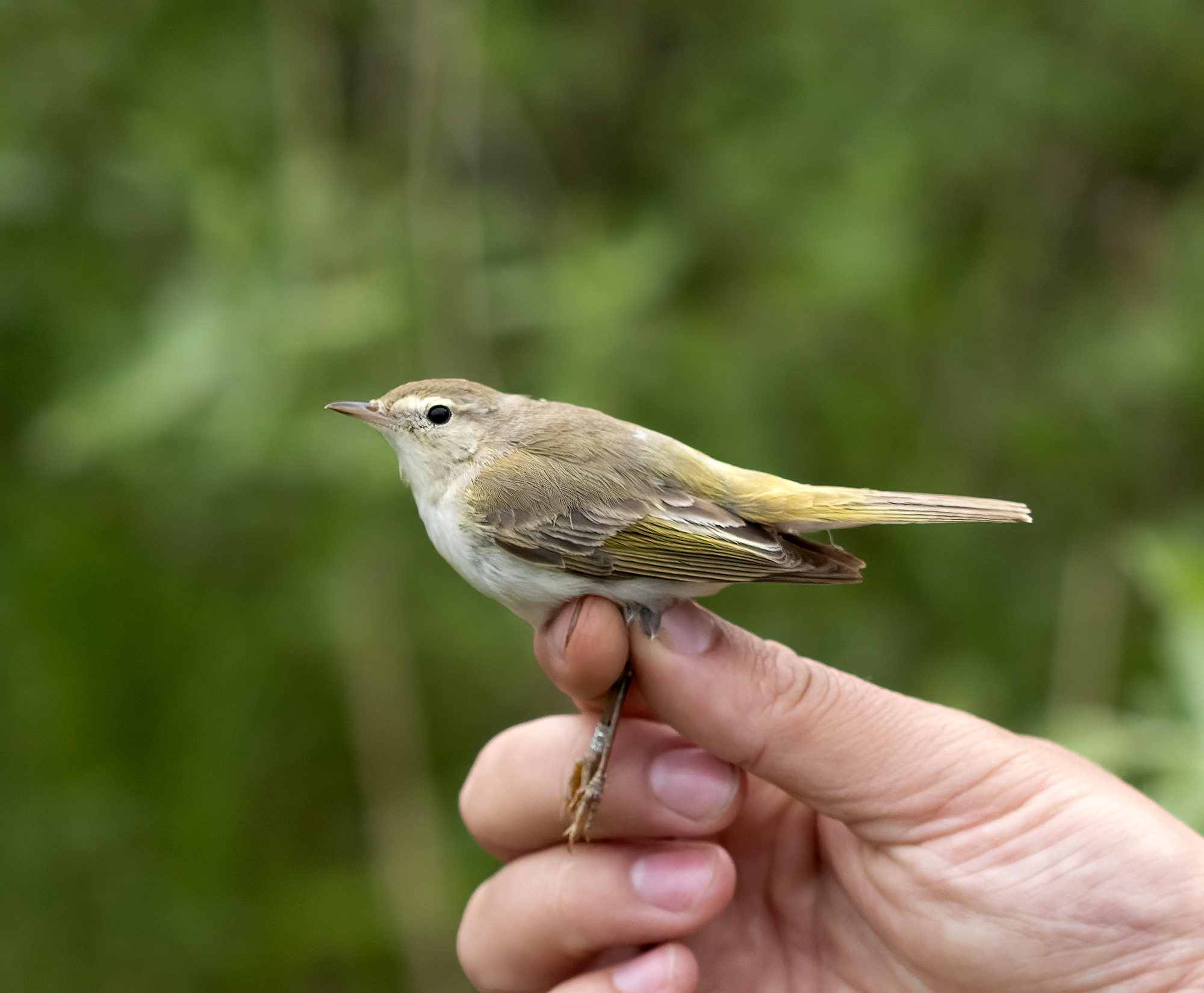 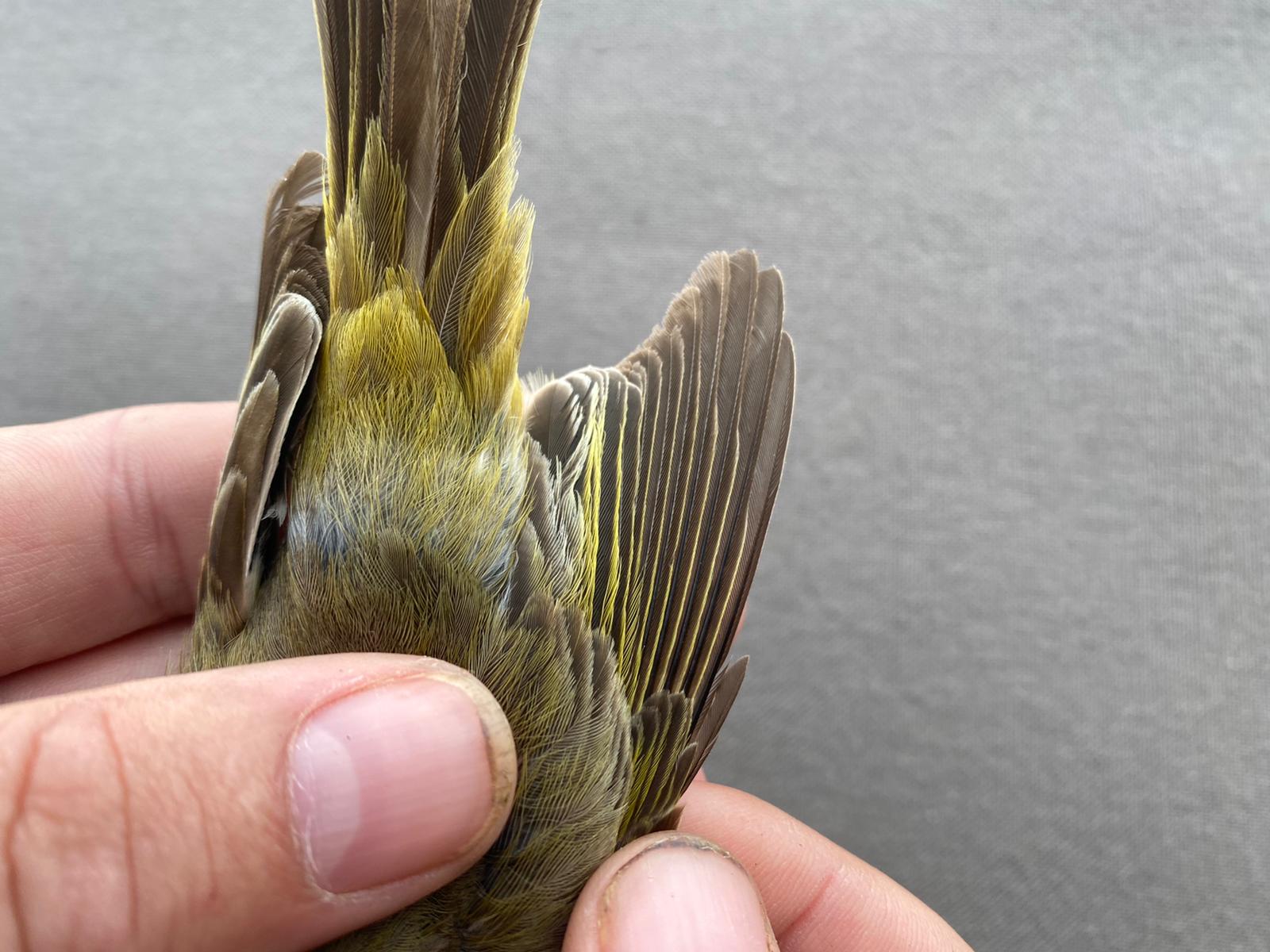 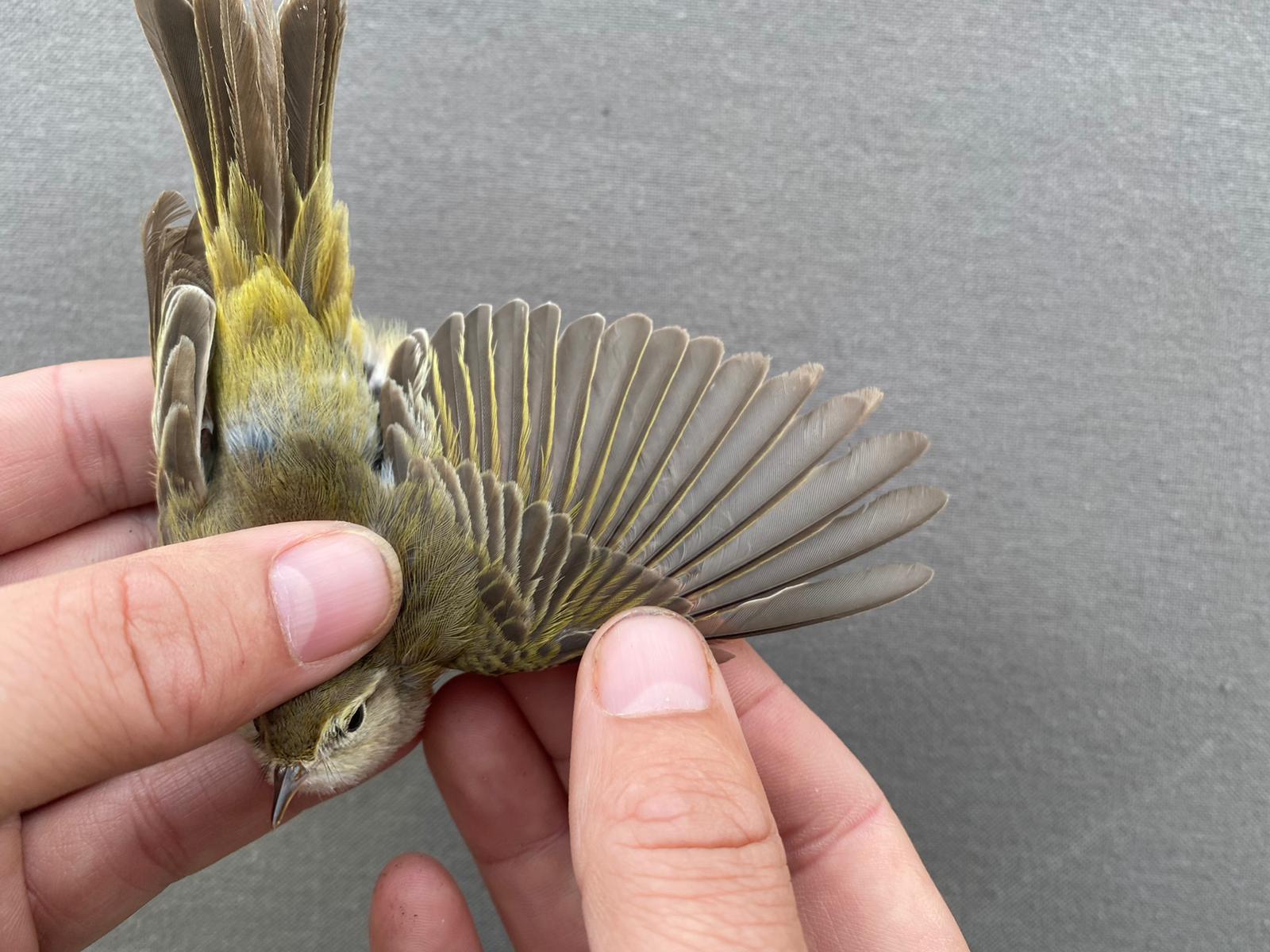 Bonelli's Warbler (Bjergløvsanger)
No less than 57 people, waiting to see it. Seeing the bird was such an experience itself, but seeing people's faces and reactions made the whole experience even better. I don't know about you, but seeing people happy makes me happy, and those were 57 ecstatic people! 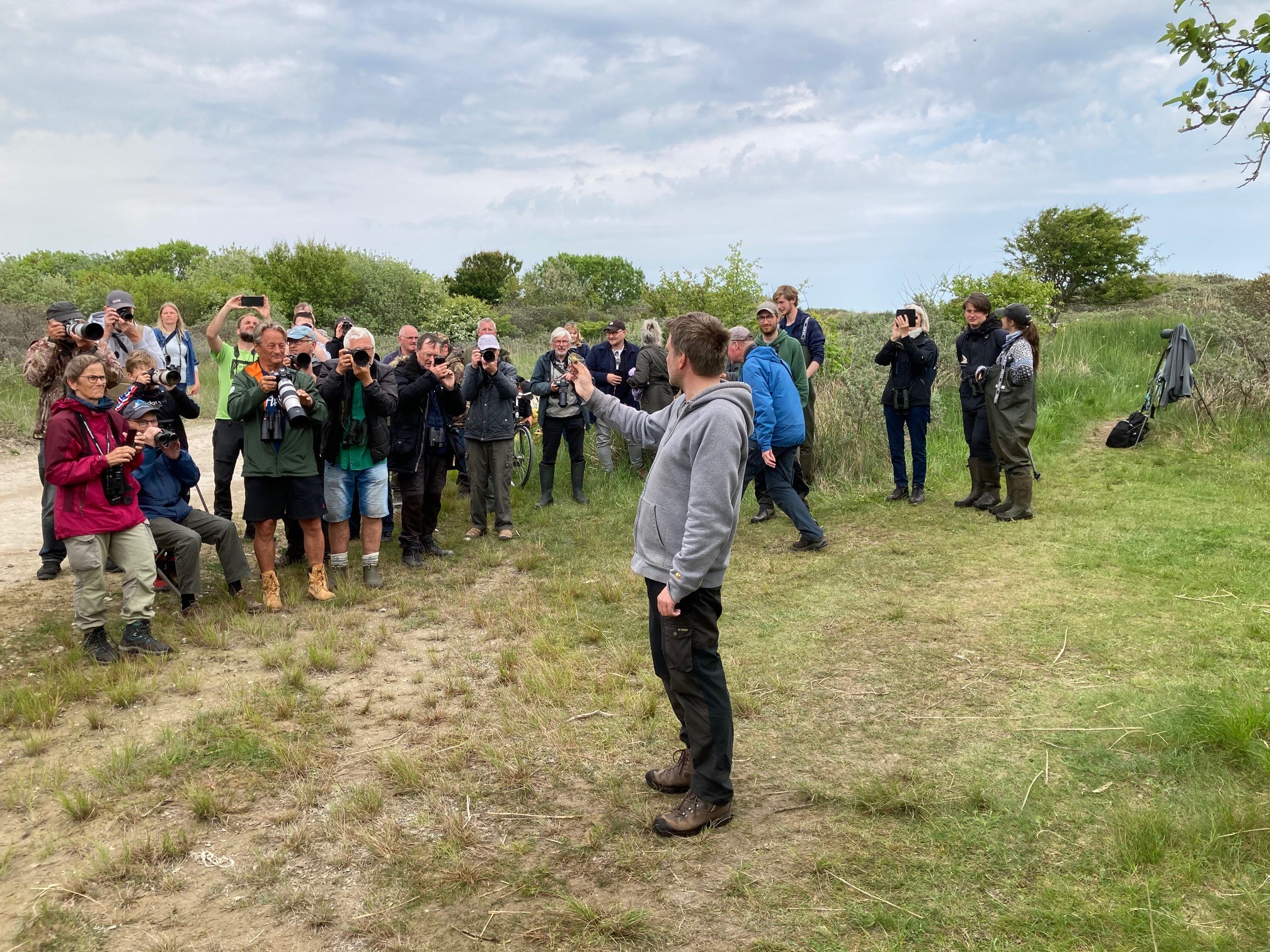 Rasmus released the bird, we closed the nets soon after, processed the birds, and went home by 1:30 pm. We had some food and worked straight away on the little article for Fuglnet, put the feathers taken for DNA analysis into the "family book" (where feathers are stored from all the rarities caught by the station), and took a nap.
Charlotte and Rasmus went shopping after their nap, and Jonas had the pleasure of working with Sebastian Klein on his article about the Bonelli's Warbler (Bjergløvsanger).
Hans Christophersen is joining us tonight as he will be part of the board meeting tomorrow and has been offered a bed instead of driving all the way tomorrow morning.
Ringing (Kabeltromlen):

Sum = 5
It's been a very long day, so I'll wish you a very good evening and hope you enjoy today's story! :)