Before I started writing this blog, I ate a few joke biscuits (German: "Scherzkeks") to make my work go more smoothly.

So let's start with today's adventures of your five brave volunteers. There was no ringing today due to the strong wind. Nevertheless, Alice and I took over getting up early and headed for the morning observation at Verdens Ende 3. On the last stage of our walk to the observation point came the sign that would change the course of the rest of the day: While Alice and I walked fearlessly side by side towards the end of the world, Alice had an appearance: God showed himself to her. 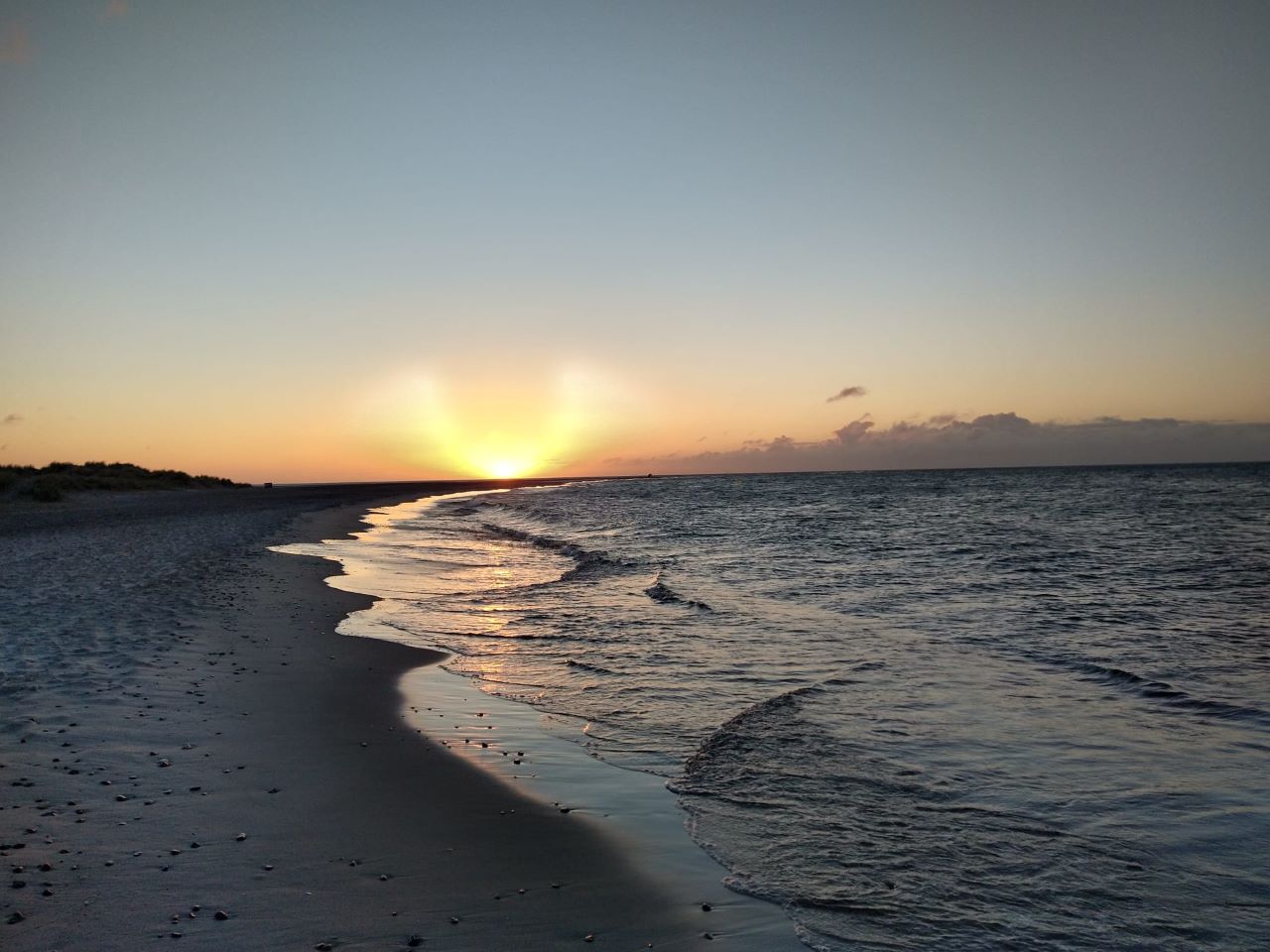 And he did not show himself to me, who was only a few meters away. You will see what drastic effects this had later in the day. But first, we took up our position and looked through the telescope at an empty sea. For 3 hours we waited without highlights and could observe more Common Terns "Fjordterne" than usual. In the third hour, we were joined by reinforcement: despite our warnings of a slow obs, the intrepid Manuel came with his telescope. Four observers also took up their posts a few meters from us. Among them Michael from Naturbutikken. They had observing success on their side and saw a Red-footed Falcon "Aftenfalk"! Unfortunately, we heard about it a little late and did not see it. Alice and I went back after three hours while Manuel took the fourth hour and saw some Fulmars "Mallemuk". Robbe meanwhile checked the nets in Kabletromle, as we hadn't ringed today or the last few days and it was so windy. When Alice and I arrived at the station, we met the first person who had been blessed with a present from God today: Leona had stayed at home this morning and had had a ten-hour night's sleep! This is a real rarity at a bird observatory and is considered by us to be the first gift from God of the day after Alice's revelation in the early hours of the morning. Full of energy Leona now set off to Ellekrattet. Robbe soon returned and we went through some videos of our most daring adventures for this autumn's recruitment video. Undaunted, I then sat down in front of the laptop to start entering the sheer mass of data we had collected today at Verdens Ende 3. But then a visitor knocked on the door: Mogens presented Manuel Gods' second stinking gift of the day in a plastic bag: He had most likely found wulf "Ulv" Shit!  A little later we told Simon the good news on the phone, who told me to put the plastic bag with the valuable contents in the freezer so that Aarhus University could check the DNA to see if it was really from a wulf "ulv". When I came out of the lab, the others had also gathered in the yard, because we were planning to have brunch in town today and finally try out Danish Smørrebrød. While four of us stood and talked, waiting for our full team to be ready to leave, Robbe got the third gift from God tucked into his jacket pocket. An unknown generous donator, who we would like to thank once again, slipped a grant for our Smørrebrød brunch into the pocket of the befuddled Robbe and praised our work. Thank you, we like to hear that and a little praise also encourages us. So the five of us cycled into town against the wind blowing straight at us and had delicious Smørrebrød and desserts in the Smørrebrød Cafe. 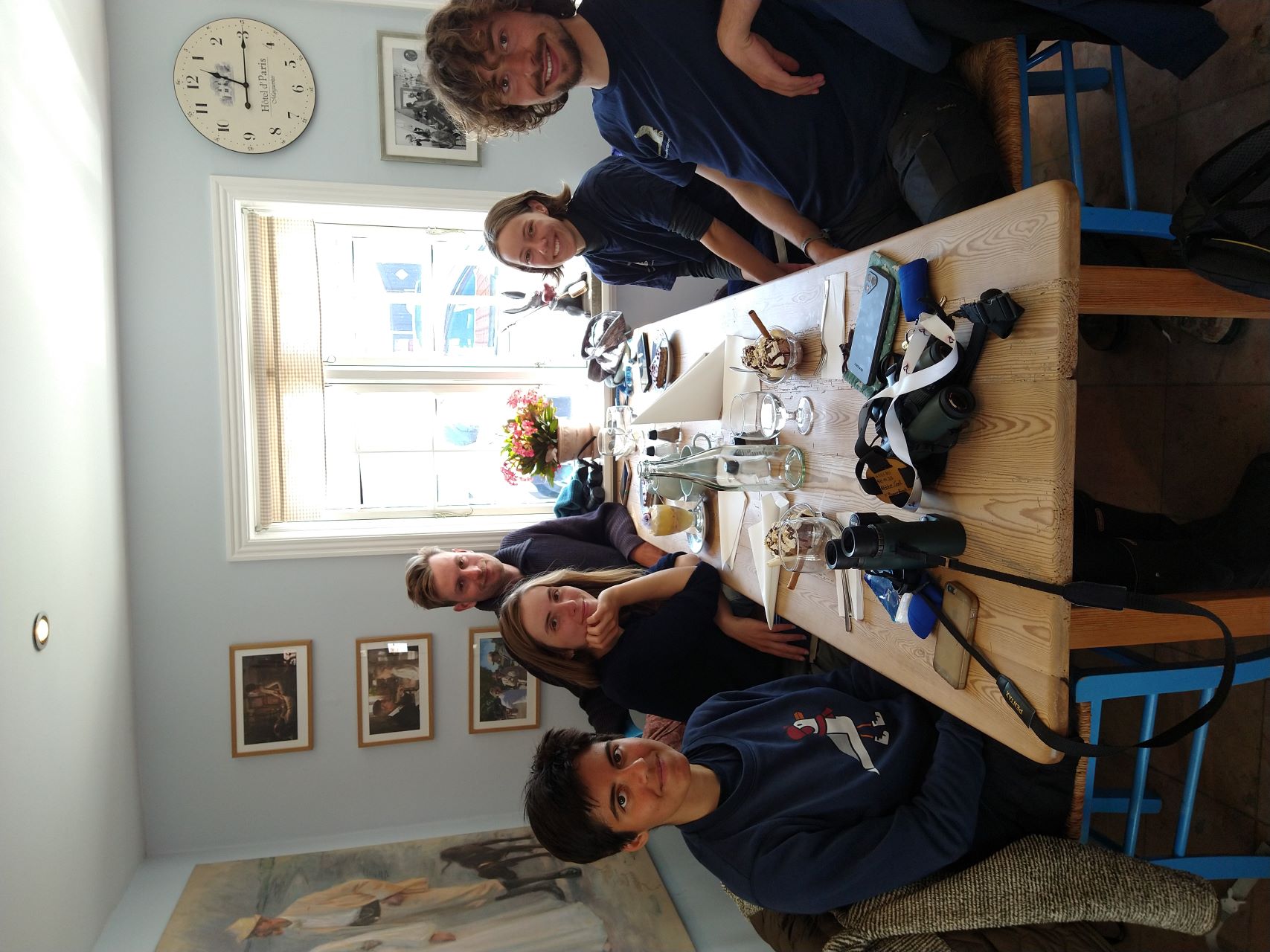 Manuel, Leona and I then went grocery shopping. In the afternoon, Robbe had a meeting for University and Alice got the fourth of Gods presents from a local: A dead viper for the Raptor-Catching Project. Thanks! When Manuel, Leona, and I came back from the supermarket, I took the three Kilos of potatoes we had bought out of my backpack. The fact, that these turned into at least eight Kilos of potatoes when I opened the storage cupboard is, I think, not due to Gods goodness, but to our mismanagement in doing groceries, at least concerning potatoes. We spent the rest of the day mostly inside with data entry, picture archive, nocmig and napping for some of us. Two friends of Robbe arrived in Skagen and they found a Great Reed Warbler "Drosselrørsanger" at the Cormorant lake! And Lisbeth and Vilhelm reported seeing God in the third figure, in form of a White-tailed Eagle "Havorn", very close at Batteriskoven. They also saw Black Kites "Sort Glente" and a Spotted Flycatcher "Grå Fluesnapper". Afterwards, they visited Skagen Odde Museum and had lunch in Skagen Bryghus.

And the end of the story: I am now the only black sheep in this house among all these enlightened people, who did not receive a gift from God today. However, I come to the conclusion, that I have also benefited from Gods goodness and so I decide that I am not completely abandoned by God after all and can also go to bed with peace in mind. I hope, you come to the same conclusion.

In any case, I wish you a good night!