Today was a very special day, almost one that you would say one in which we were presented with a golden opportunity :) Leona, Hanelie, Alice and I woke up very early to catch the 5:20am train down to Skørping. From there, the wonderful Hans Christophersen picked us up from the station and we were on our way!

With hardly a cloud in the sky, we had an excellent day of spotting birds and wildlife. We were in the car for only about 10 minutes before we spotted a little owl (Kirkeuglen) sitting on the roof of a local farm. There was a second one in the window too. Hans said that this one of only a few pairs found in this part of Denmark. We felt very lucky to have seen them! 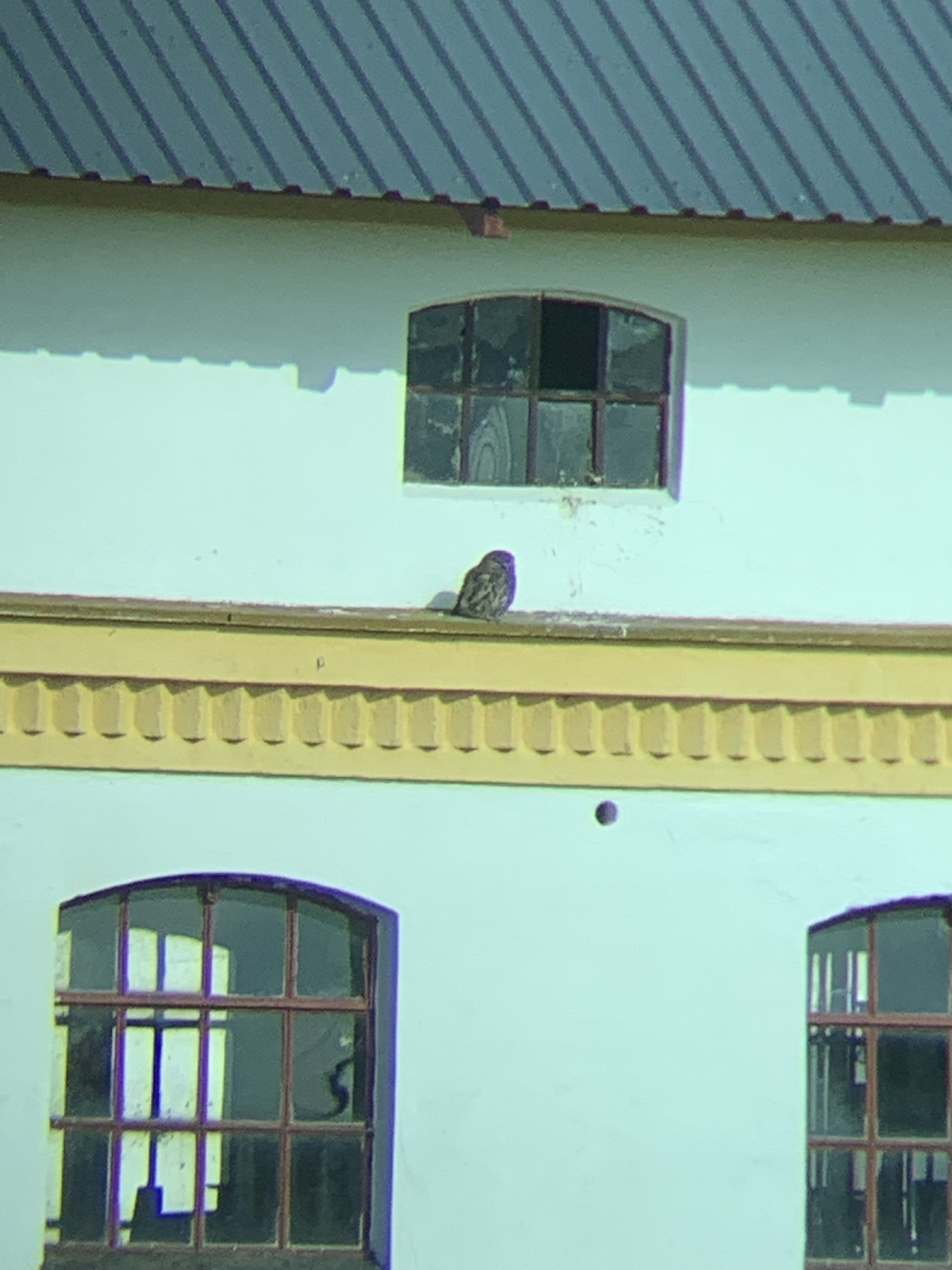 Picture of a little owl (Kirkeuglen)

After this, we continued our journey to Lille Vildmose area (link to their website here), we saw many birds and other wildlife throughout our time there. During one of our first stops, we saw a Great Spotted Woodpecker (Store flagspætte), as well as Red-backed shrikes (Rødrygget tornskade), tree pipits (Skovpiber), whinchats (Bynkefugl) and stonechats (Sortstrubet bynkefugl), just to name a few. We also heard grasshopper warblers (Græshoppesanger), although we did not have the fortune to see them. They like to hide in the reeds, making it difficult to spot them! 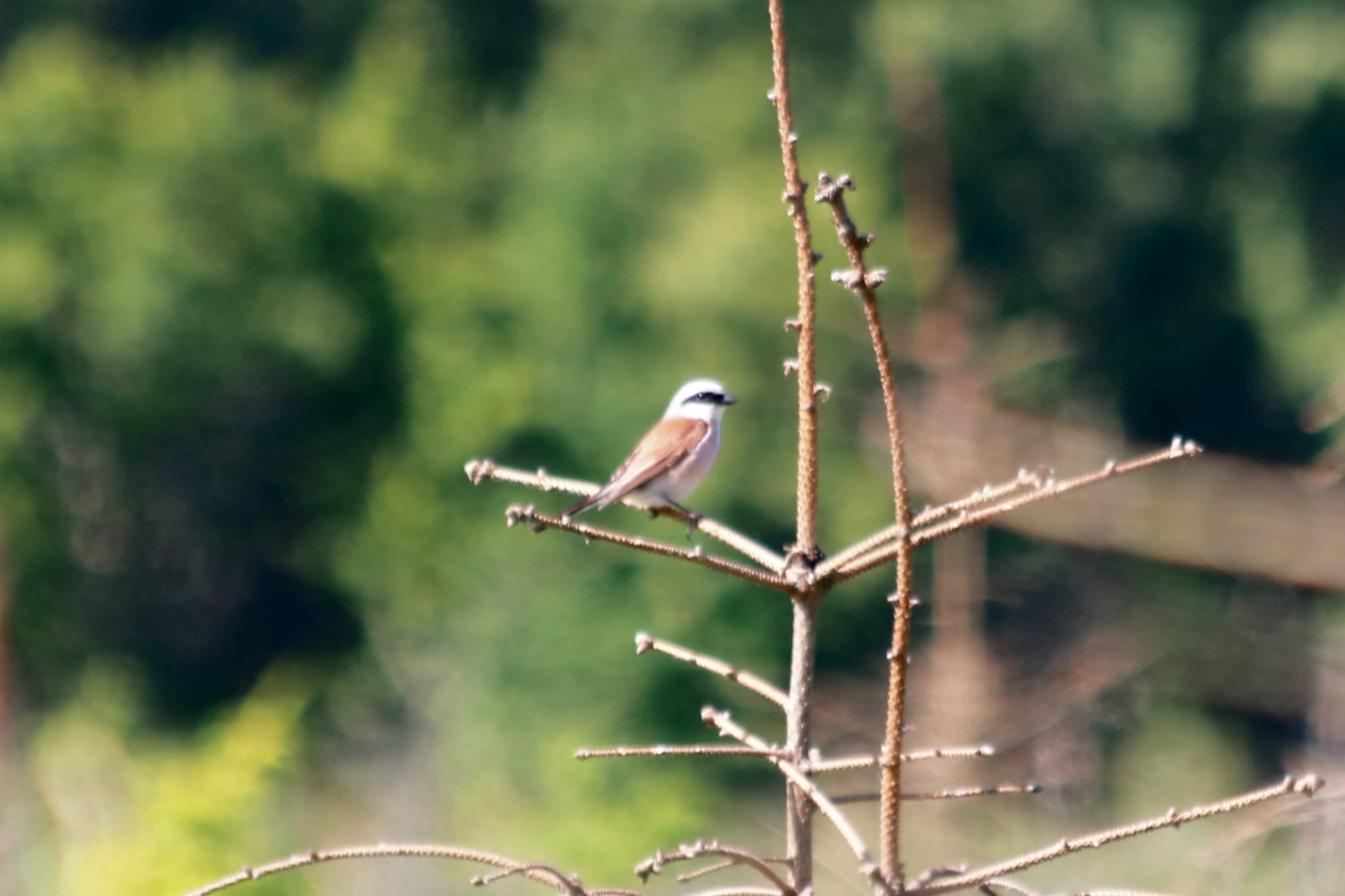 In addition to these birds, we saw plenty of wild boars (Vildsvinet) with their young, red deer (Kronhjorten) and reintroduced bison (Bisoner). It was so great driving along with Hans and seeing all the various wildlife as we made our way throughout the reserve! 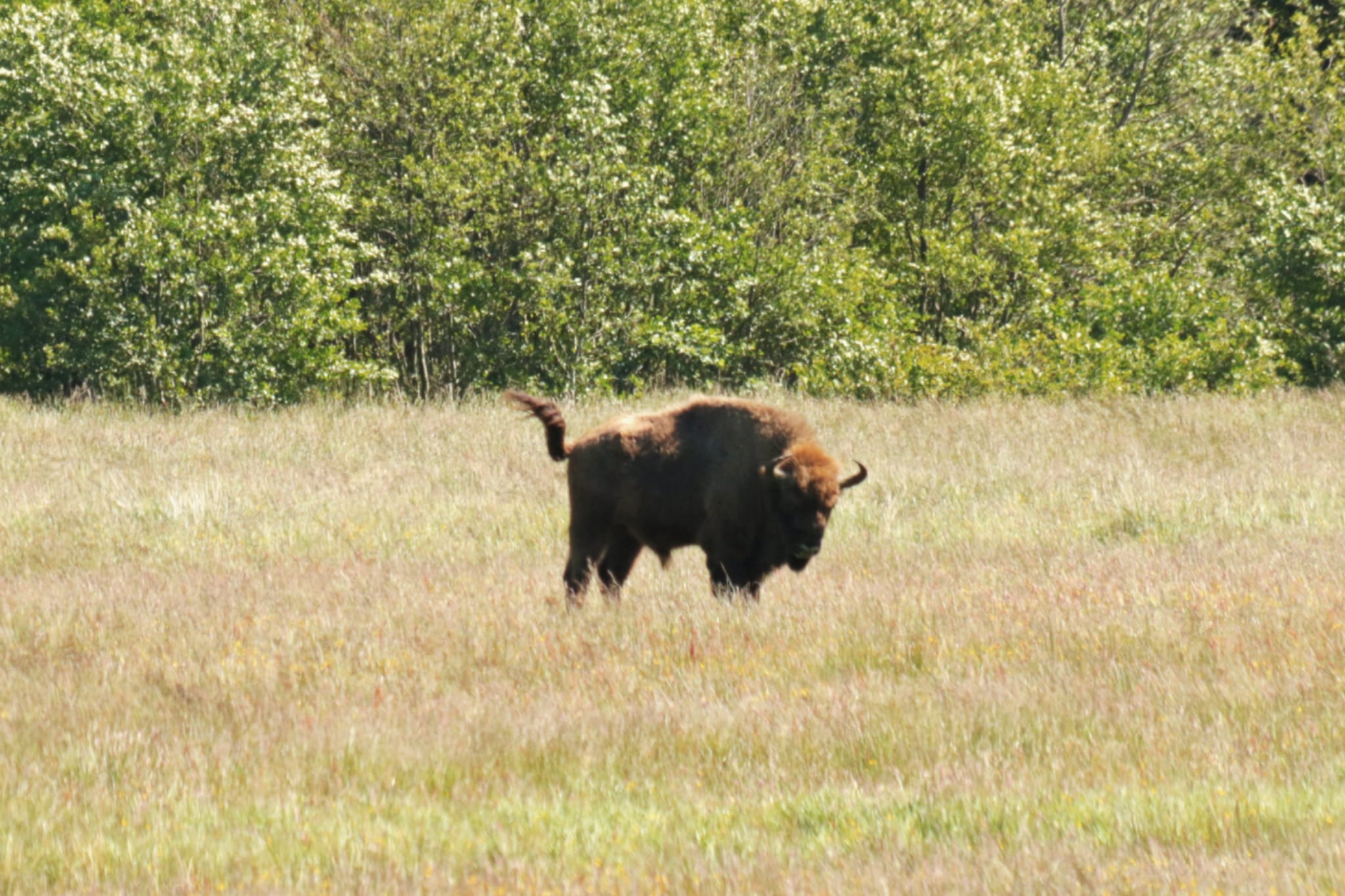 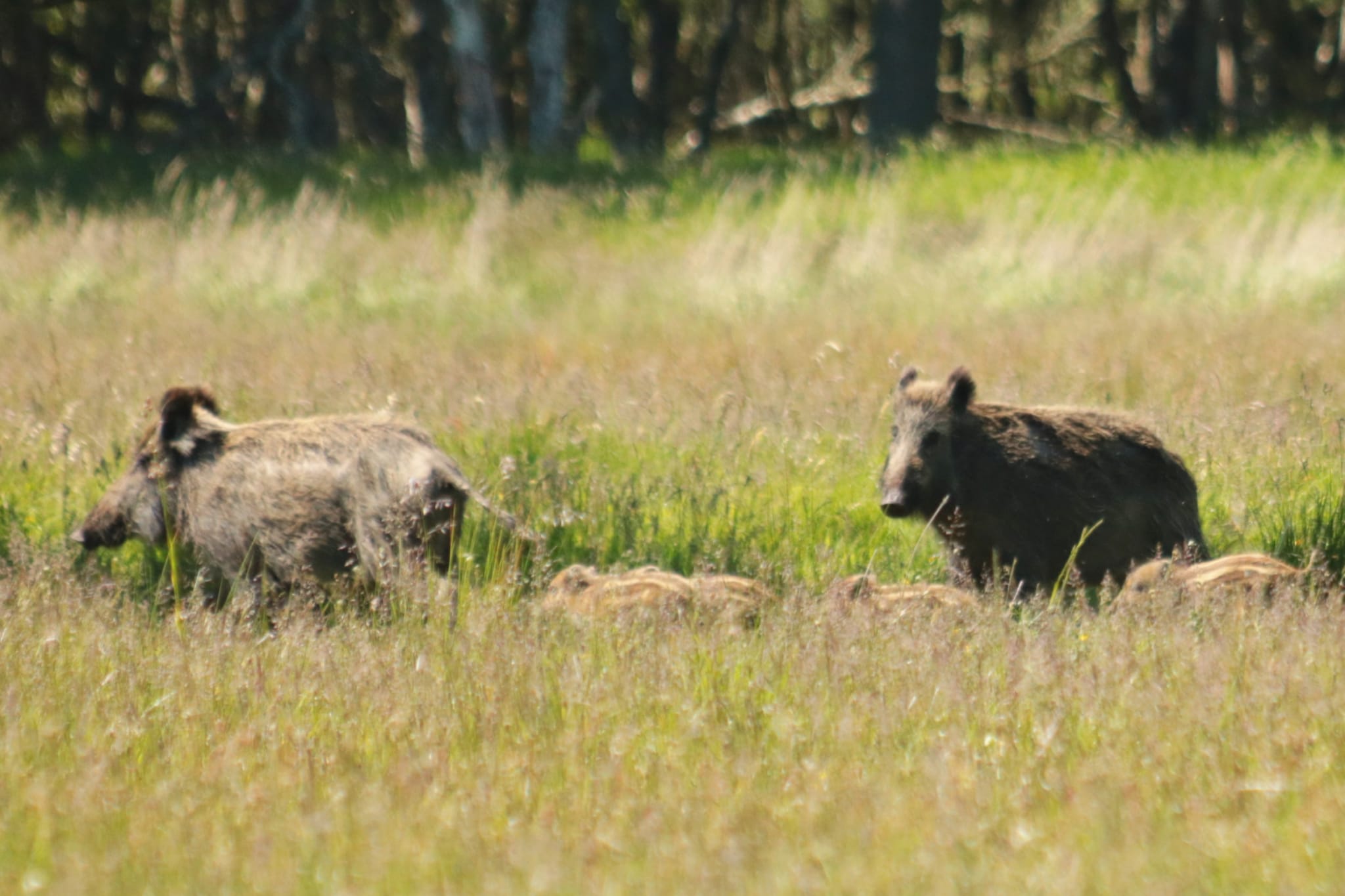 At around 11am, we had a very special opportunity in the reserve! We met up with Anton Larsen and Jan Tøttrup Nielsen to see if we could ring a Golden Eagle (Kongeørnen) chick that had hatched roughly 5-6 weeks ago. We headed into the forest towards the nest and waited in anticipation as Jan expertly climbed the tree to check the nest. Luckily, there was the chick in the nest, with remains of a red deer that a parent had left for it! After gingerly lowering the chick to ground level, Jan was able to ring it using both silver and color rings. The color ring is green and red to indicate that the bird is a hatch year of 2022. 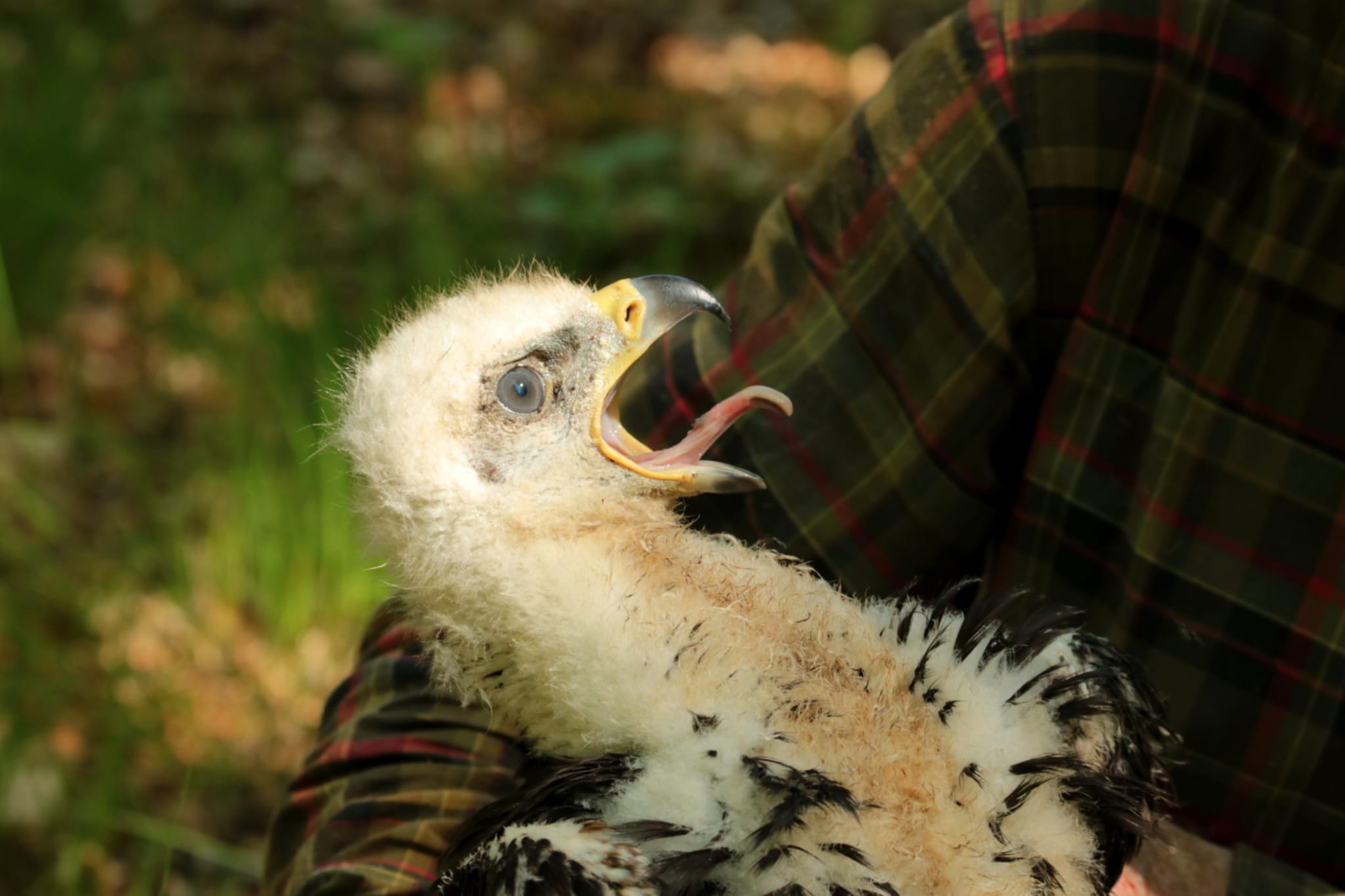 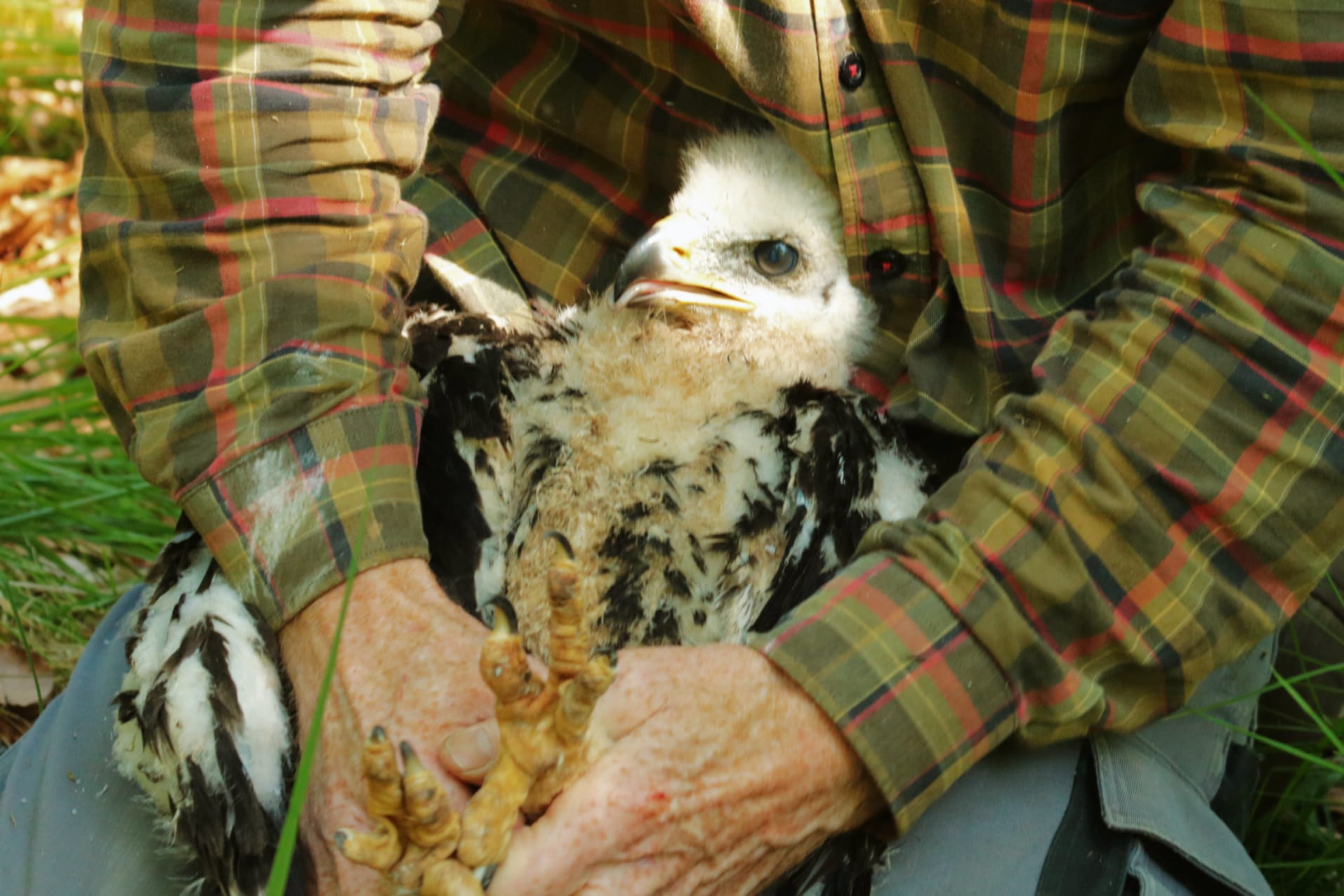 Jan is also interested in studying diets of both white-tailed eagles (Havørnen) and golden eagles (Kongeørnen). After he returned the chick to its nest, he located remains of feathers and fur both in and around the nest. Jan has thus far notated at least 88 different prey species of golden eagles, whereas he has noted at least 52 different prey species of white tailed eagles! We were so amazed to see the Golden Eagle (Kongeørnen) up close in person and we are excited to touch base with Hans to find out when the bird eventually leaves the nest!

After seeing the Golden Eagle, we continued around the reserve, spotting more and more species! We checked out a white-tailed eagle's nest and saw that both parents were flying in the area. After this, we climbed an observation tower to continue birding while enjoying a great lunch that Hans's wife helped to prepare. Lastly, we traveled around Birkesø lake, where we saw a lot of wading birds, such as Eurasian Spoonbills (Skestorken), as well as the Black-headed gull (Hættemågen) colony! We spotted Lapwings (Vibe) as well flying about. 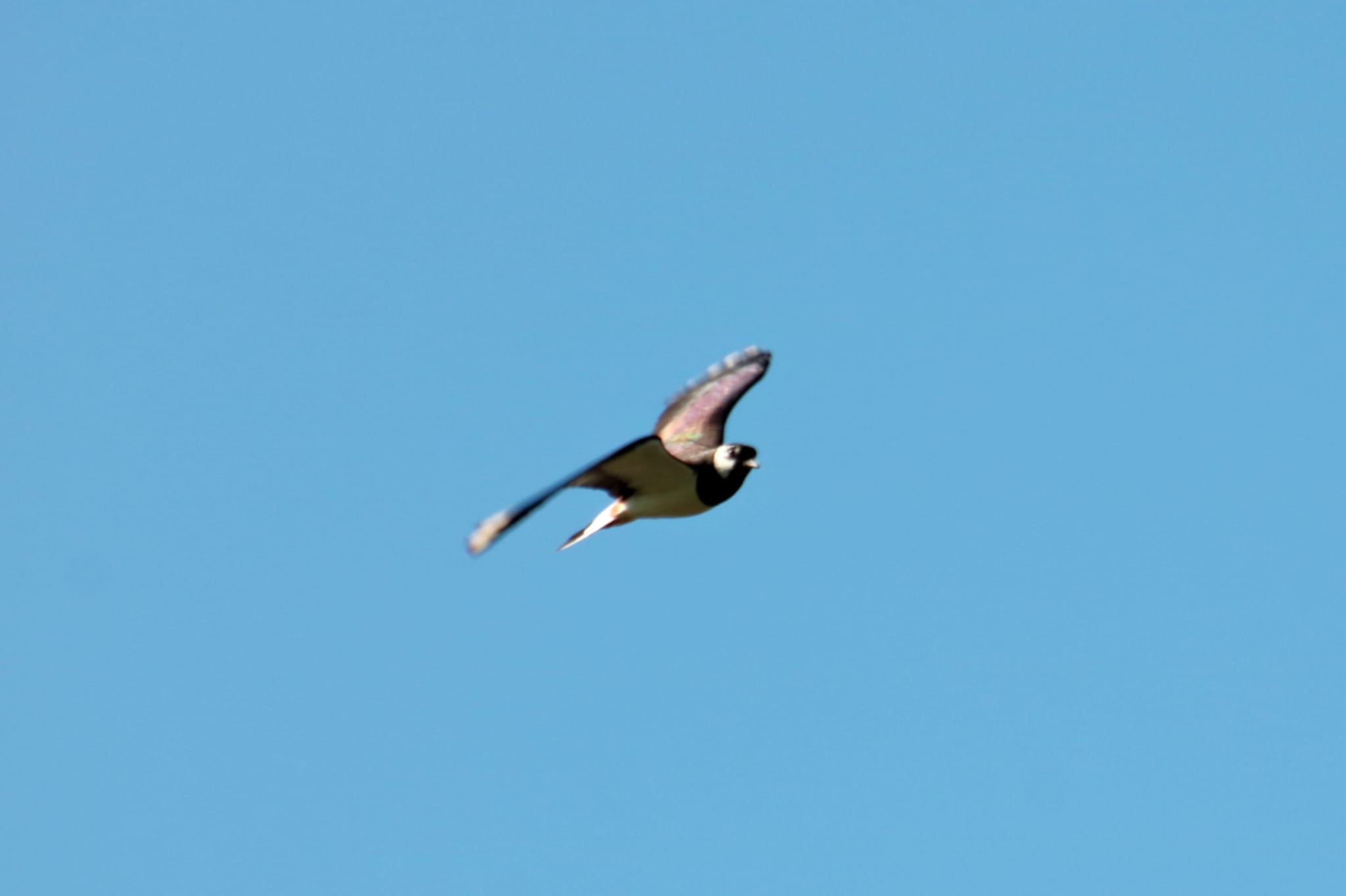 All in all, it was a fantastic day and we were so very fortunate to have Hans guiding us throughout Lille Vildmose. We were also super lucky to see Jan and Anton ring the Golden Eagle! Tomorrow, we are excited to go ringing with Olaf and to see what birds we will have at KAB. :)

As we finish out today's blog, we wanted to say hank you for reading and for all your support for Skagen Fuglestation! We are all wishing you a great rest of the week and a fabulous weekend ahead! Stay tuned for more happenings tomorrow :)