First, a short extract From Elisabeth and Helene who were part of the ringing group yesterday but were out observing this morning:

“Today is our second day at the Bird Observatory in Skagen.

Yesterday, we were invited to help and learn about the bird-ringing, which was an action-packed and fascinating experience. We caught many birds due to the optimal weather. The volunteers showed us the local bird species, their different features and were engaged to answer our questions. It was a great day to start the week with and to gain a first impression.

This morning we woke up at 5:15am and walked to the tip, where the two seas (north-and Baltic seas) meet each other. Just as we arrived, we saw a beautiful rainbow on the sky opposite the sunrise. It was a remnant of the rain of last night and a predictor of what was to come. It was cold and windy, but we managed to identify several groups of birds. For instance, the gannets (Sule), which dived deep in the water to fish. There were much more than yesterday; we counted to 600. After about one hour, we got rained on quite a bit and since there is no cover everybody got really wet. Persevering, we stayed out anyways to continue our counts of migratory birds. Among them we saw several red-throated divers (Rødstrubet Lom) both flying and sitting in the water. Some of them were still in breeding plumage and we got a very good view of them, which was nice. Towards the end of the morning, we got a really special sight of a Merlin (Dværgfalk) who was perched on the beach. We couldn’t see if it had any prey but after a few minutes it flew off again. After that we left because at the tip with the wind blowing and all of us quite wet it got really cold. Solenn and Diana stayed to continue the count while we walked back towards the campground. On our way we stopped at the tent where the other group was still busy with the ringing.

There, Frank showed us a bird that we hadn’t caught yesterday. It was a juvenile Redpoll (Lille Gråsisken) that had found its way into the net just before we arrived.

After lunch we went in search of barn swallows (Landsvale) and found a few but not nearly as many as there were yesterday. Then we helped with the data entry and started writing our reports of the week.

From Elisabeth and Helene”

Now from the stations view; 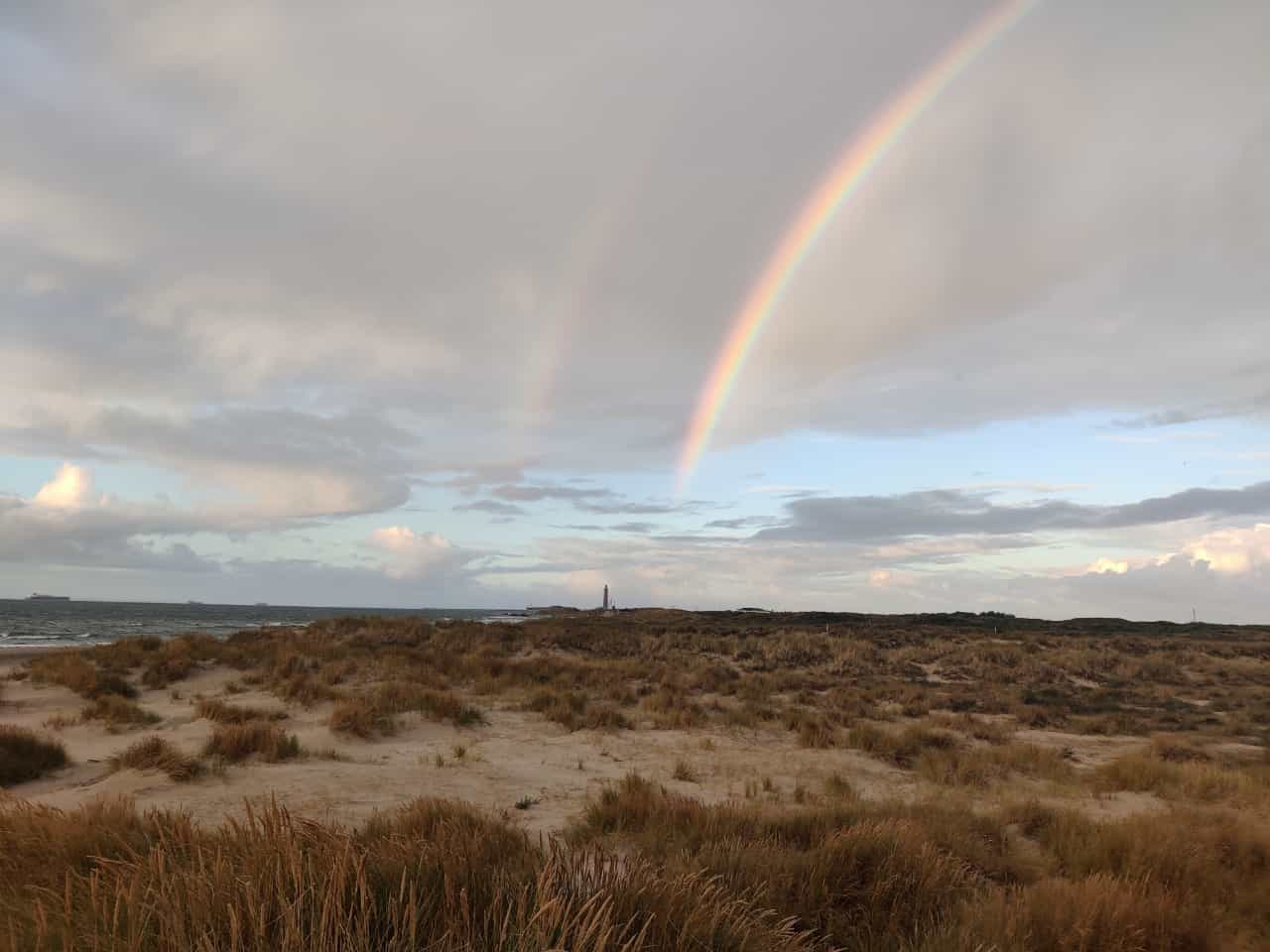 The morning's winds were still quite high and would usually result in postponing the ringing, however, with the school group still here and with birds and ringing to see, me and Hanelie opened as usual, with a few of the most exposed nets remaining closed. After the first 2 round we had already caught a good number of birds following a similar trend as seen in the last couple of days, which are, thankfully, much improved from the last two weeks numbers of birds caught each morning. At around 8am however the rain had started, and we rushed around temporarily closing the nets we had open and waited for it to pass as we sheltered in the tent, we have down at the ringing site. A privilege, I might add, that cannot be said for the unfortunate observers out at Worlds End 3 who felt the full force of the winds and the rain out on the dunes. At around 9:30, more rain was forecasted and for a longer period, so with the birds slowing, we closed and sent the wet student back to their tents for some lunch and to prepare for their afternoon tasks.

As mentioned previously, the poor observers out on the dunes felt the full force of the wind and the rain, but it was not all in vain. The highlight of the morning was the Corys Shearwater (Kuhls Skråpe), first spotted by Diana and then seen by others. It’s a rare bird here in Skagen but not too unexpected following the high winds we have had here in the last few days, so it was a good spot, and we will be on the lookout for more in the following days! Some other highlights from the morning were some Skuas, high numbers of gannets, and a Merlin (Dværgfalk) resting on the beach.

Peter Kristensen also paid the station a short visit and worked with Simon about fixing and setting up the radio mast that will allow us to record movements of radio tagged birds that pass within 15km radius of the mast.

Kristin and Carl, our current guests, bravely went for a swim just down past the lighthouse. I hope that when I am 90yrs old, I will also still be able to take swims in the sea and live life just as full as Carl as I’m sure the rest of do also.

Today’s Observations from the area on DOFBasen