Observations this morning were eventful as hoped for with the current winds, as me and Mathilde approached the tip we saw the new water that has accumulated on the beach, this we like to see as it creates good foraging places for the waders and roosting for most of the birds we see on the beach which we will try and take advantage of tonight with some night catching and as its my last week im in need of some good luck ! overall  the main birds seen were the usual Common Scoters (Sortand), Gannets (Sule) and the migrating Auks (Alkefugle). A few nice birds of the Manx Shearwater (Almindelig Skråpe) and a few Great Skua (Storkjove) and the rest can be seen in DOFbasen using the link.

After observations we said vi ses too Kirsten, but she will be back very soon, and we did a full clean of the apartment ready for our new volunteers joining us today all on the same day; Sander, Ulysse, and Augustin. We also welcomed the new guests to the apartment Pia and Thomas. Other than that, the day consisted of naps, data entry and data checking which we are now up to date with.

This evening however Simon joined for the evening meeting and to welcome Sander but also after I spotted a suspicious kestrel (Tårnfalk) sat outside the lighthouse, ran out after it and caught the juvenile. Unfortunately, this means it can’t be in very good physical health so we will be keeping an eye on it throughout the night and trying to feed and water it till the morning, where Simon will take it too a wildlife rehabilitation Centre if it pulls through. 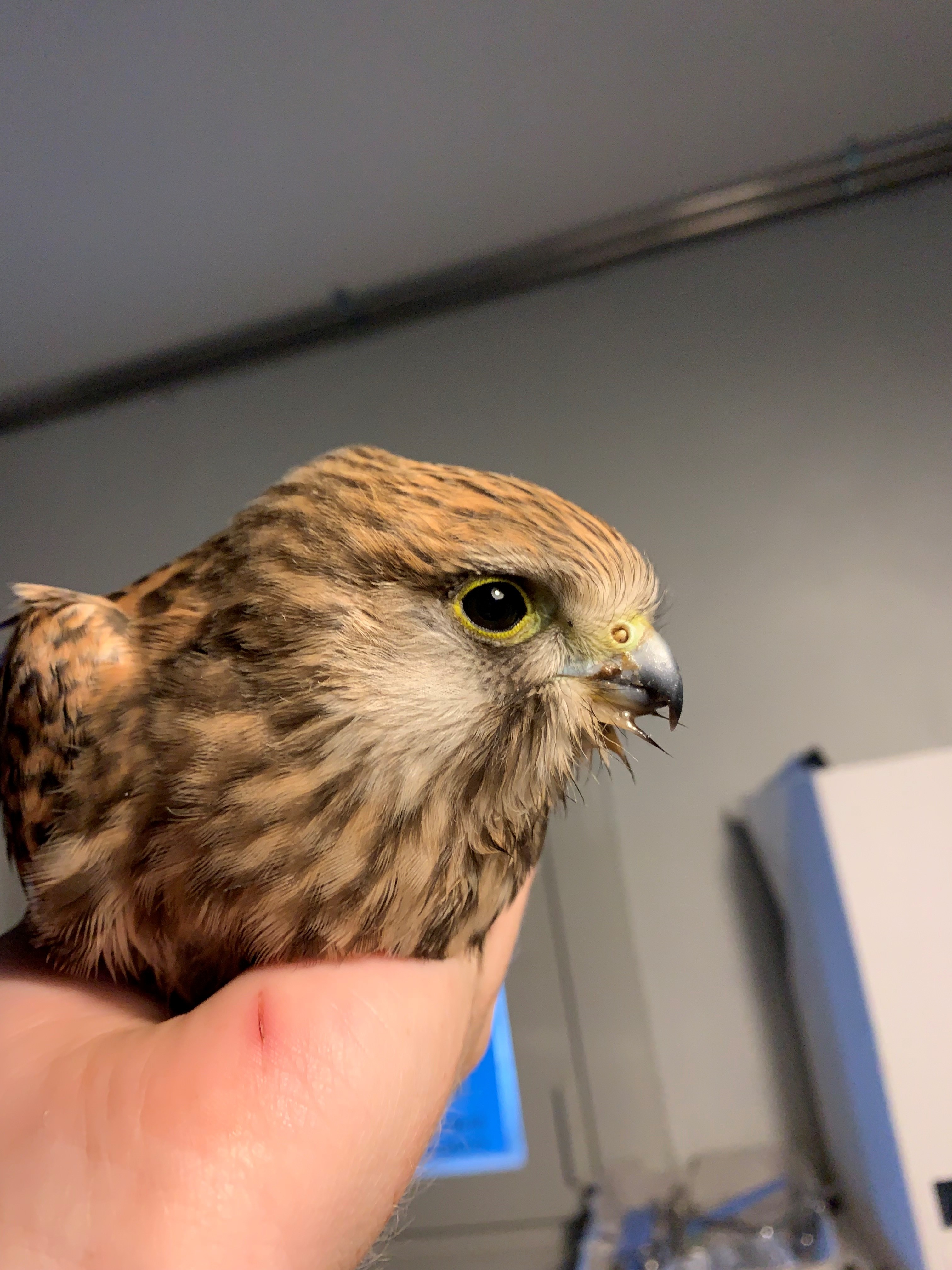 Ringing at Kabeltrommlen this morning. Sadly the opening was delayed slightly by rain but, by 6, we were ready to do rounds. The morning was quiet in terms of birds caught. I ringed my first redpoll (lille gråsisken) which was nice otherwise only common birds of the past few weeks were ringed. However, observations were more active. As we were arriving to open, Frank caught sights of a long eared owl (skovhornugle). Simon was very happy to see a manx’s shearwater (almindelig skråpe) from Kabeltrommlen for the first time! As we were closing, Simon and Frank also saw a flock of penduline tits (pungmejse). 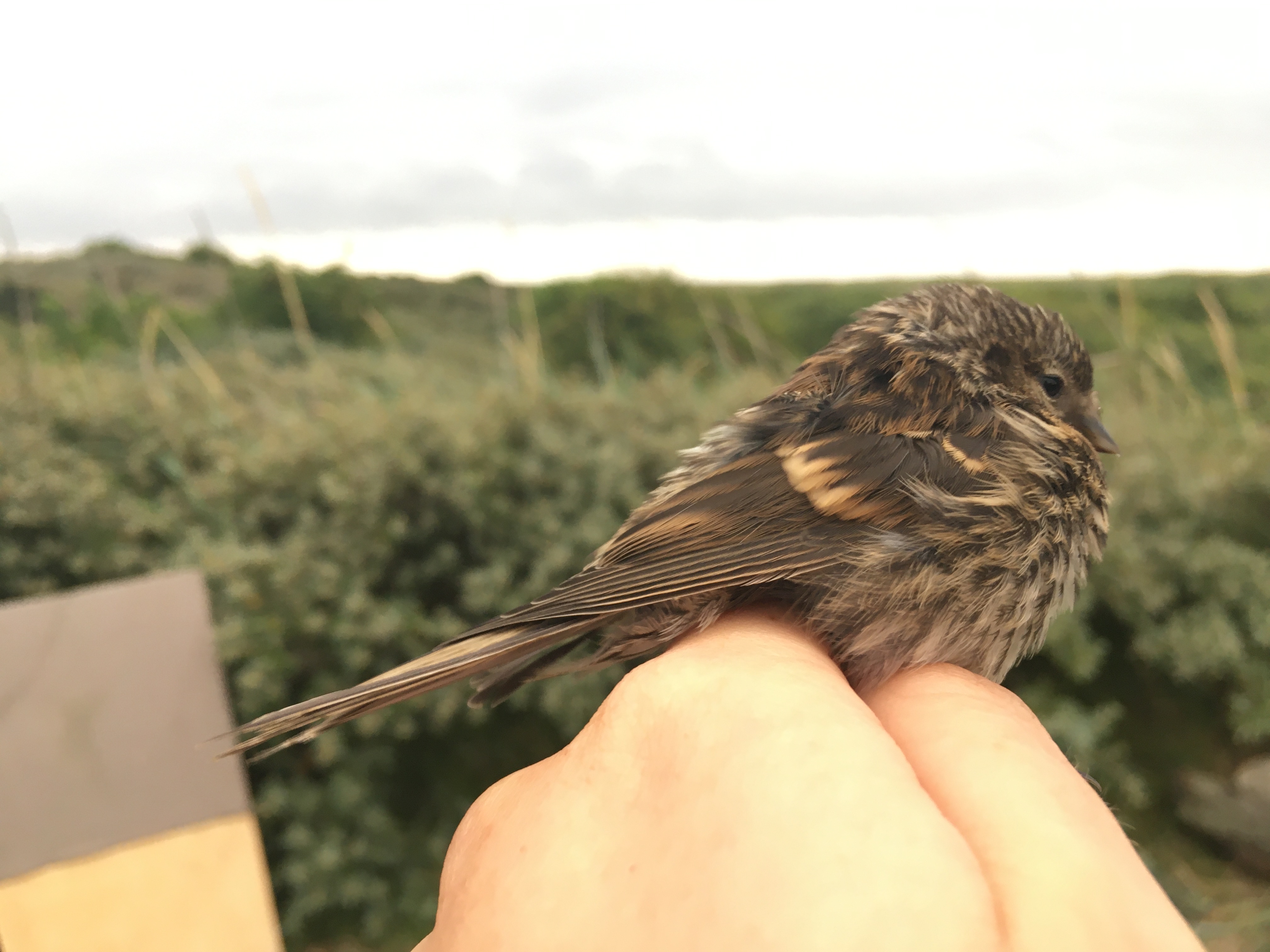 The rest of the morning was spent napping and entering the morning’s data. After lunch, around 2, Simon came back to bring me and Frank to Jerup strand to look for waders. We stopped off to pick up Lisa and headed out. The start was quiet and looked as if the trip would not be very fruitful but we ended up finding quite a few species: dunlin (almindelig ryle), oystercatcher (strandskade), crane (trane), curlew sandpiper (krumnæbbet ryle)… I was a bit distracted by the enormous amounts of shells covering the whole beach especially the pelican foot. On the way back, we stopped at Råbjerg mile which was very impressive. 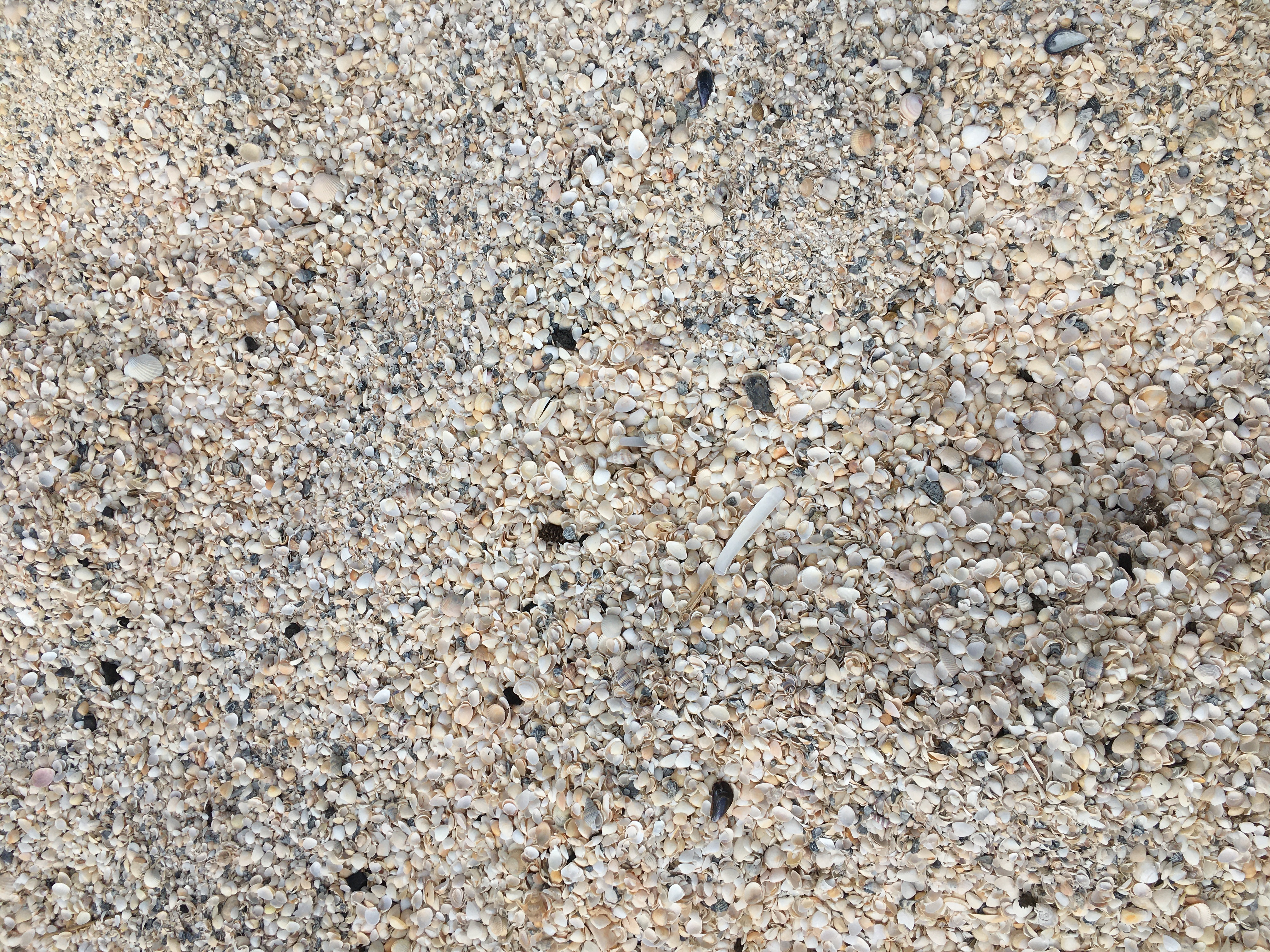 In the evening, Frank made delicious seafood pasta. While eating, it was time for a net check in the garden where we found two birds: a common whitethroat (tornsanger) and a great tit (musvit). Kitrsten was able to do the whole process of extracting, ringing and releasing by herself which she was delighted about. The birds concluded the end of a very nice day. 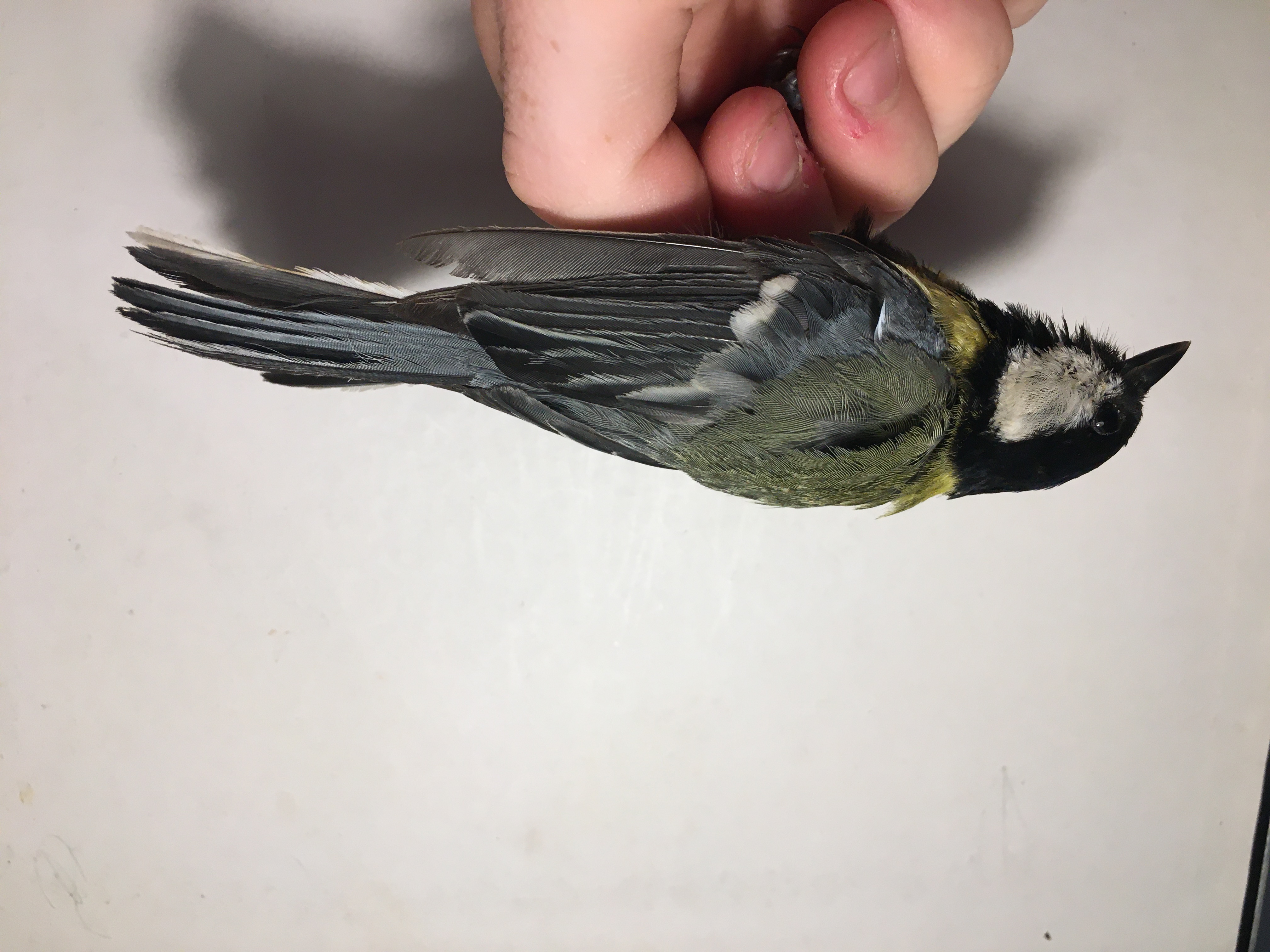 Me and Mathilde went out for some trækfugletælling this morning along Grenen, with high winds there were hopes for some nice birds but after three hours and moving to shelter near the bunker during the small rain shower we had, we left with some good counts of the usual birds including over 130 Gannets (Sule) fishing offshore and the roosting eiders. We ten came home and napped as is the usual daily routine and woke up tog et on with some chores around the station. I went to the nets at Kabletromlen with a hedge trimmer and did some maintenance around the nets to keep them clear and did some archive updating on the computer. Mathilde made pancakes for the mornings ringing and cleaned the stairs. We also opened the nets in the fyrhavn this evening to try and catch the local wagtails (Vipstjerts) and new black redstart juveniles (Husrødstjert) we had some good success compared to previous attempts using these nets with one retrap Hvidvipstjert and 2 new juvenile Husrødstjert and whilst closing the nets had a really nice surprise of a juvenile Barn Swallow (Landsvale) which was really nice to see. I helped Kirsten with some aging of birds using our picture archive and she joined us for the ringing of the birds caught downstairs and was happy to release them with their new accessories. 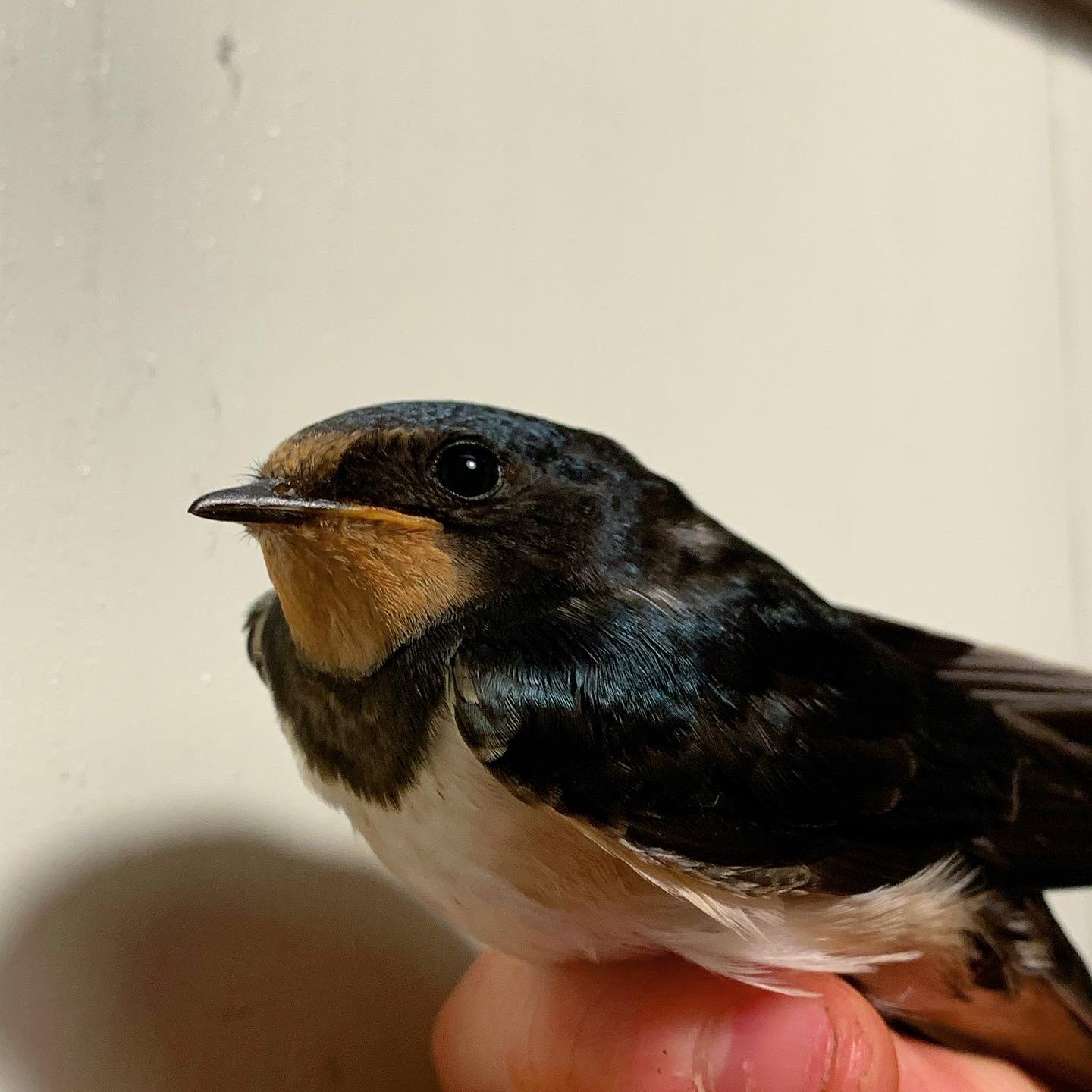 Ringing tomorrow with Simon hopes for Arctic warbler so hopefully we update with one of those tomorrow !

Ringing was delayed this morning due to the rain and wind. This meant an extra hour of sleep for us which I thoroughly enjoyed and needed. In the end, the nets were opened by 7. The few rounds we did today brought us a great diversity of birds ad finally a decrease in common whitethroats (tornsanger). The first exciting bird was a sedge warbler (sivsanger) which Frank had been wanting to ring since he arrived at Skagen. On the next round, I got to ring the more elusive wood warbler (skovsanger). The rest of the birds were the usual species captured which you can see in the list below. While ringing, half a dozen red kites where flying on the thermal currents above us. 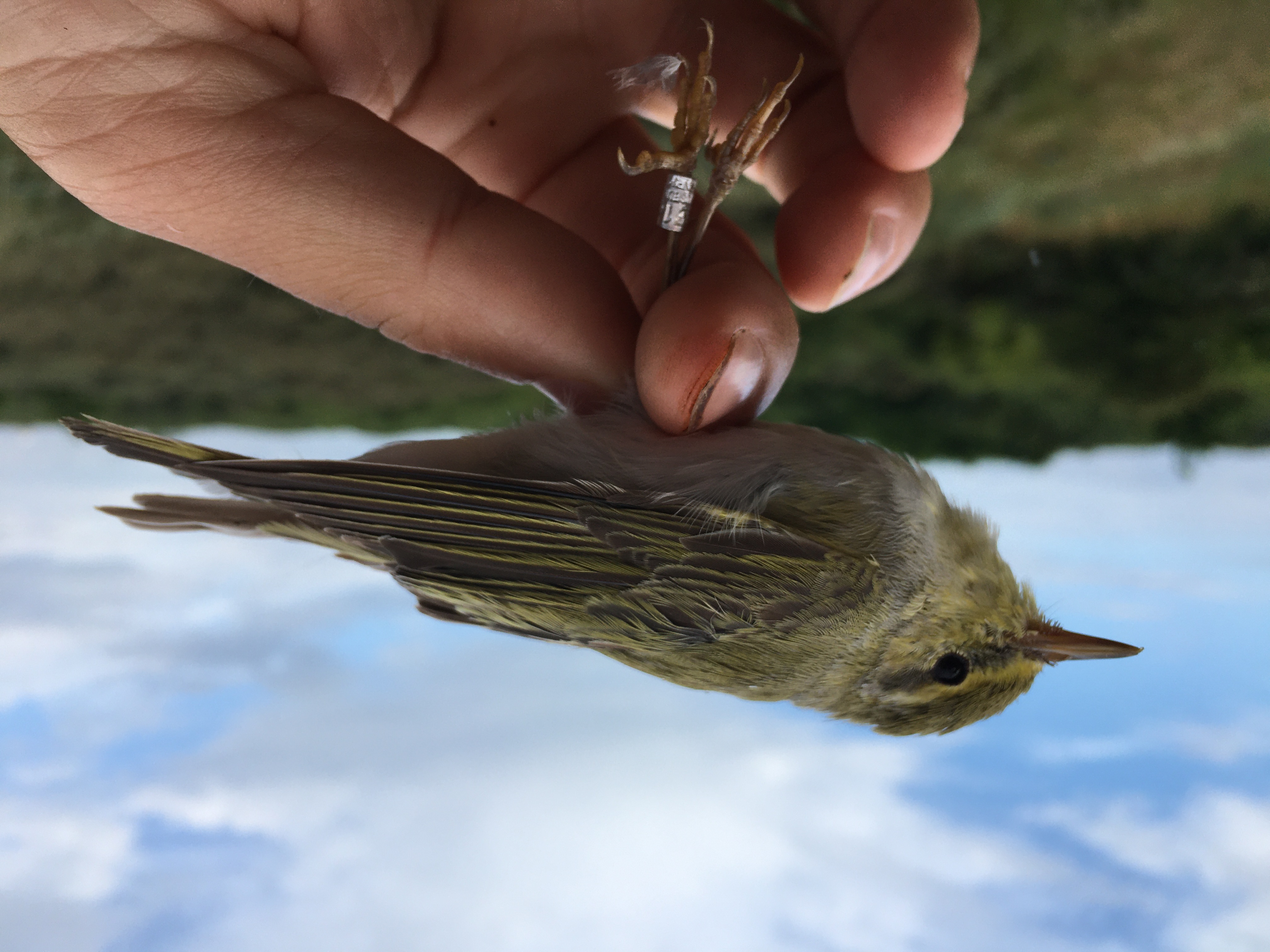 Once back from ringing, I joined my parents for lunch as it was their last day in Skagen before they headed for Aarhus. In the meantime, Frank napped and entered the ringing data. We had the evening a little earlier, at 3, as Simon has his mother and grandmother visiting as well as assisting to a talk on the lighthouse history. For diner, all the staff from the lighthouse and Blink came together for the monthly diner which was prepared by the lighthouse staff. Very good lasagna! 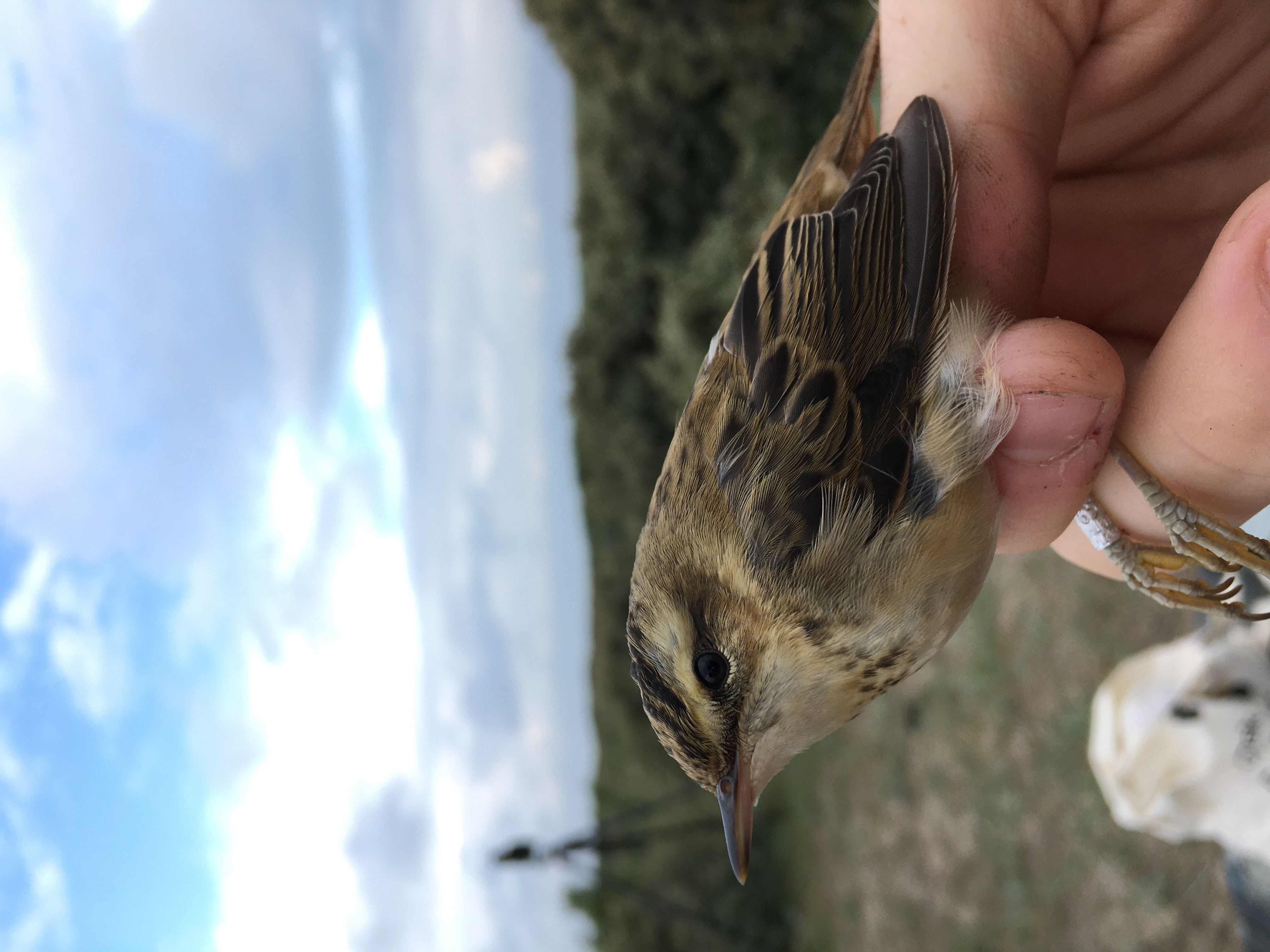 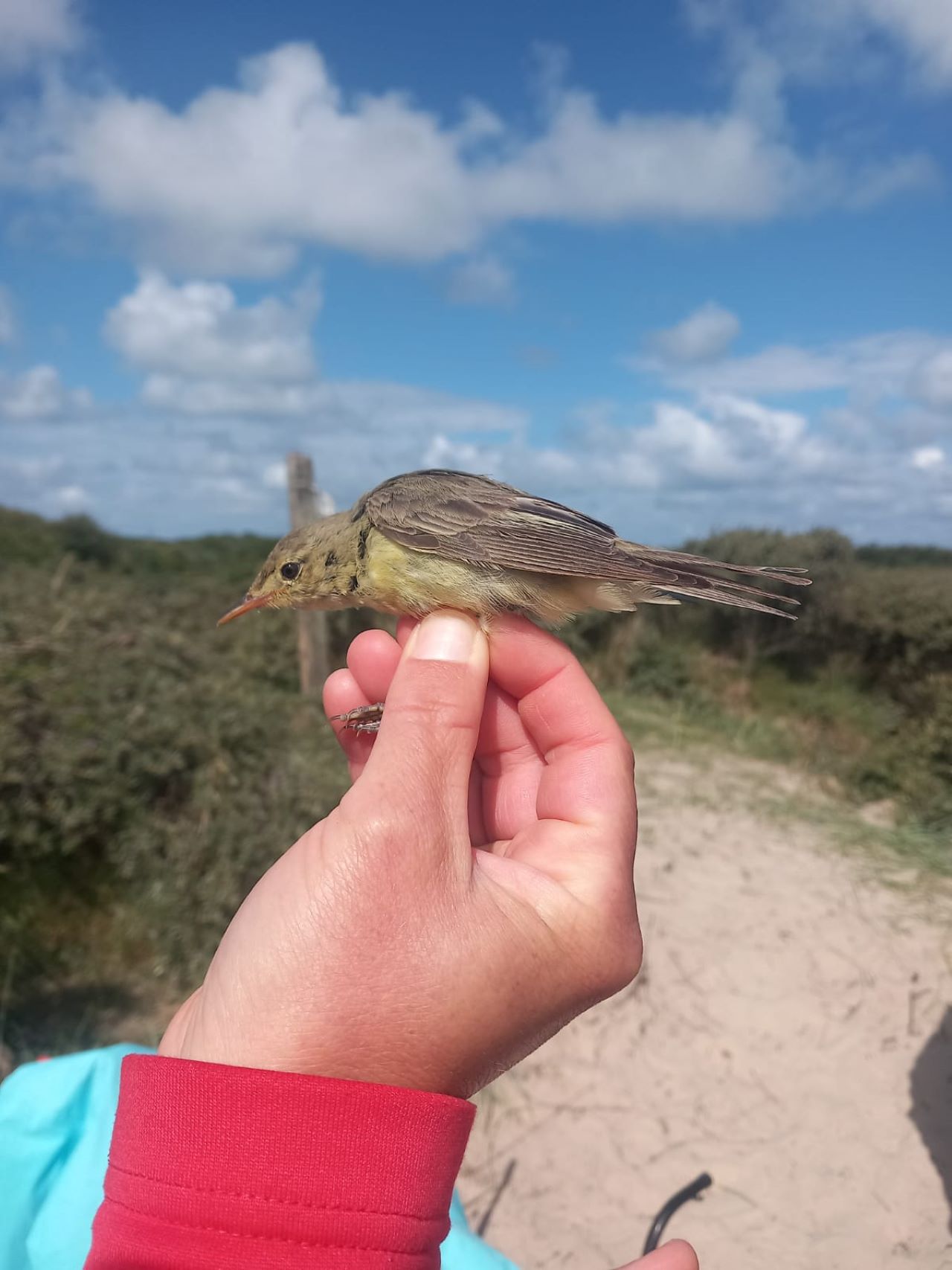 Ringing this morning was relatively slow, but Kirsten managed to get some good practice in with bird extraction and ringing. The birds were slow and it was looking like a short session due to the incoming rain so we decided to close the following round. We closed together and the birds seemed to wake up as we were doing so with double the amount of birds we had all morning in one round and a lot more diversity, with a new species in Skagen and ringing for me and Mathilde in the shape of Bearded tits or readings (skægmejse) and a nice fresh new icterine warbler (Gulbug) possibly from the pair we recatch regularly near Kabletromlen. Back at the station we entered some data from the morning and at 12:30 began preparing for the open freezer event we had down outside the Lab. After the rain we had expected little people but a decent turnout for Simon arrived to hear the talk about the different birds we have in the freezer at the moment, their stories and what is to become of them. 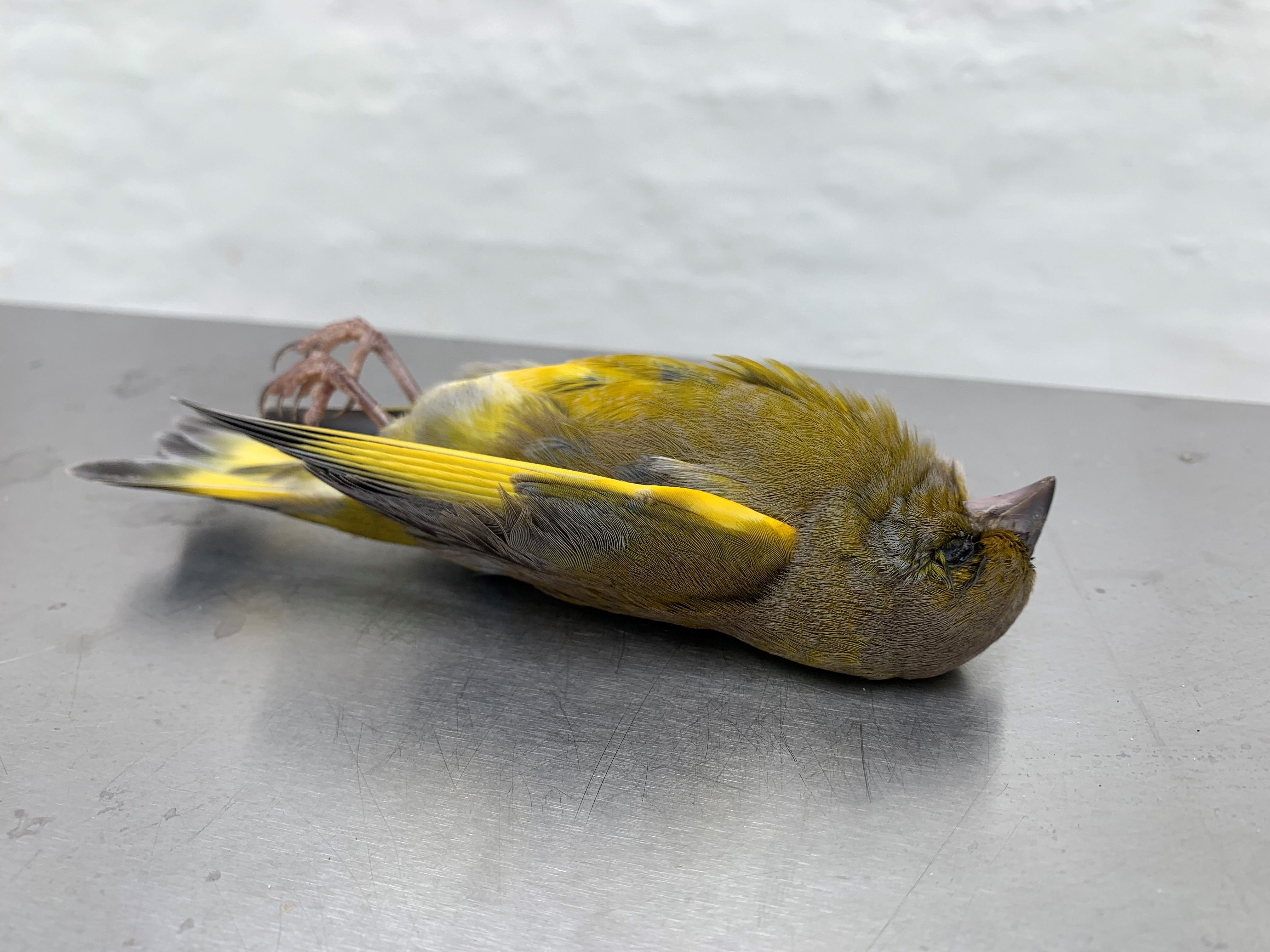 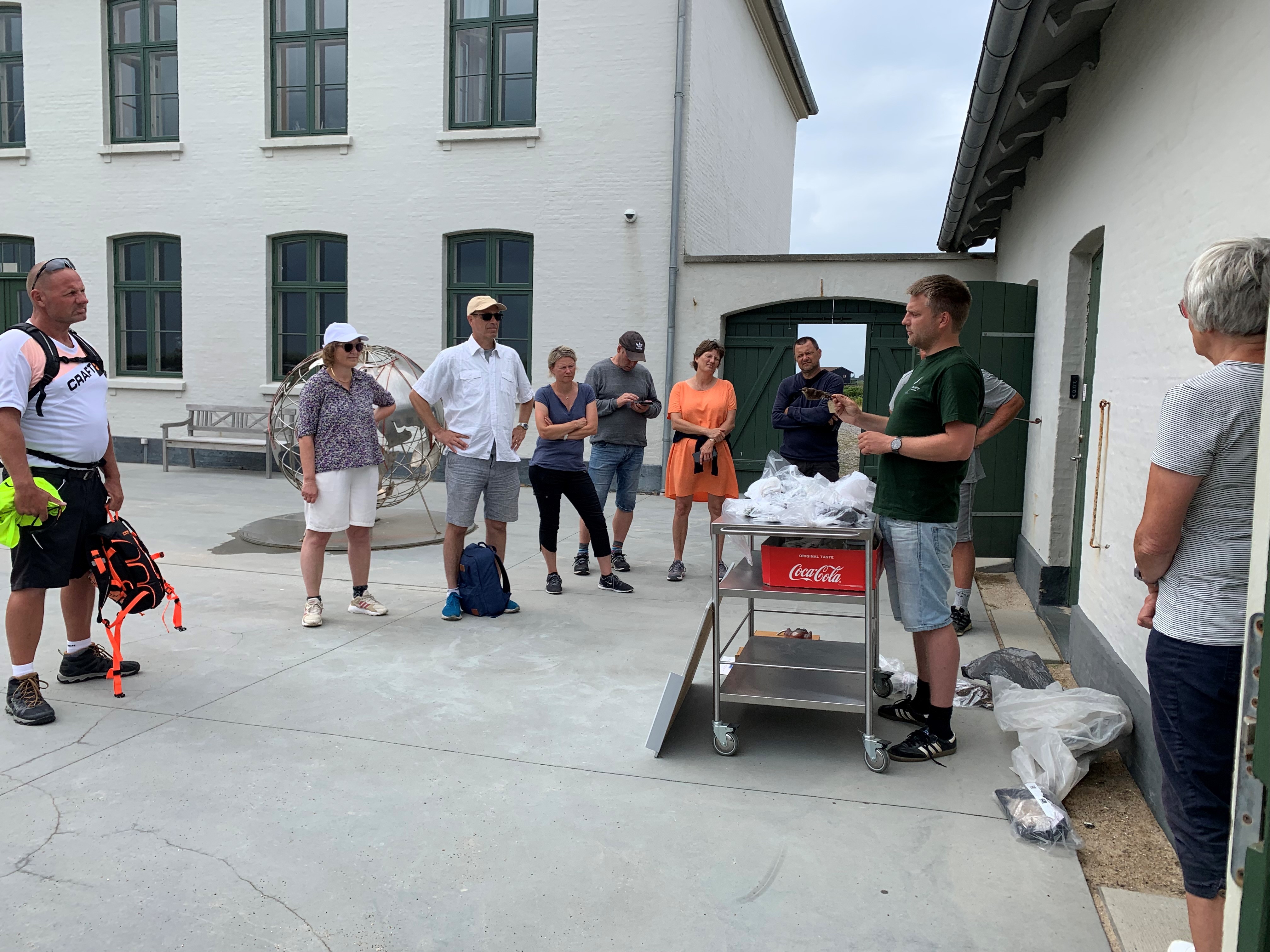 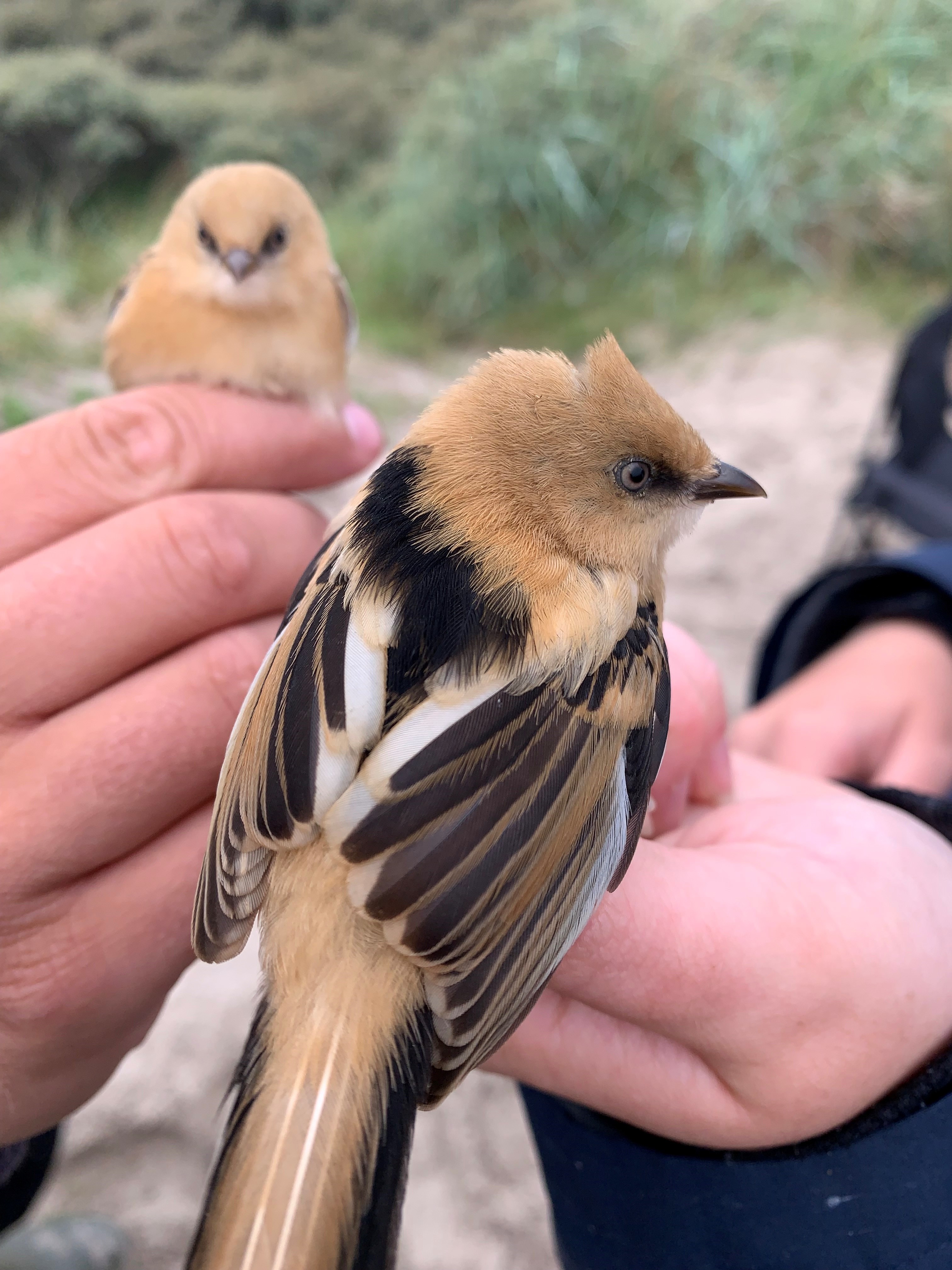 Mathilde then went out for the rest of the afternoon with her parents who are taking the opportunity to visit and explore Skagen who have also kindly offered to prepare dinner for everyone this evening so we look forward to that!

Today, we woke up early to do migration counts and morning observation on the beach at Grenen. We started off sitting on the beach close to the water watching a flock of 16 sanderlings (sandløber) pass by us, only a few meters away. We counted the many gull roosting on the beach: herring, greater black-backed and lesser black-backed. As the wind picked up, we made our way to the dunes where we continued our observations. Notable birds included many gannets (sule), a honey buzzard (hvepsevåge) coming from the sea and a flock of bar-tailed godwits (lille kobbersneppe). 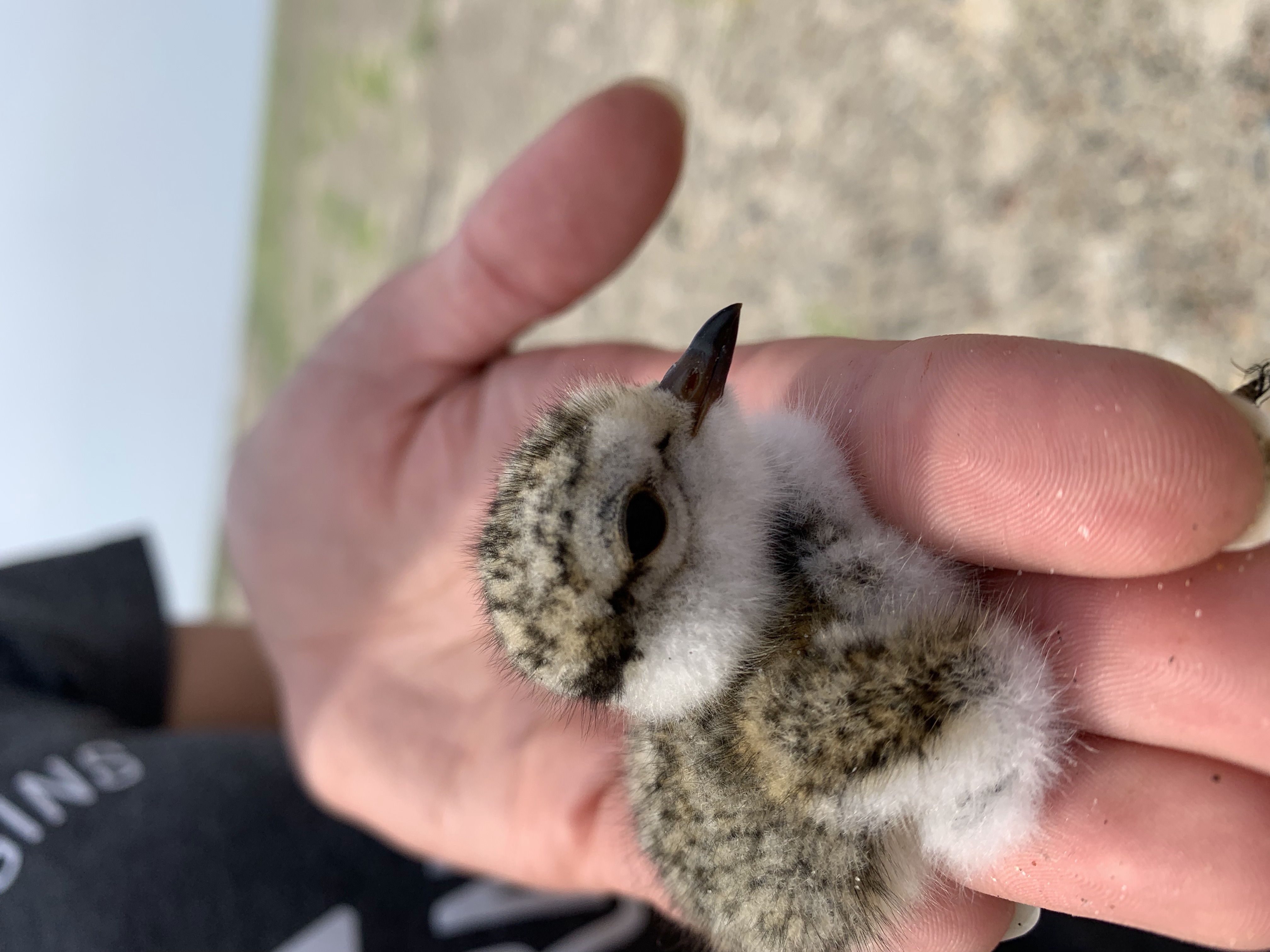 Thanks to Frank spotting them yesterday, we spent early afternoon chasing after the young common ringed plover chicks. We first looked on the right side of the tractor track. There we found 2 older chicks starting to grow their feather. We moved on to the left side of the tractor track. There we ringed 3 very young chicks while the mother turned around us calling the chicks ensuring they were ok. The chicks themselves were the sweetest little things cover in loads of fluff. 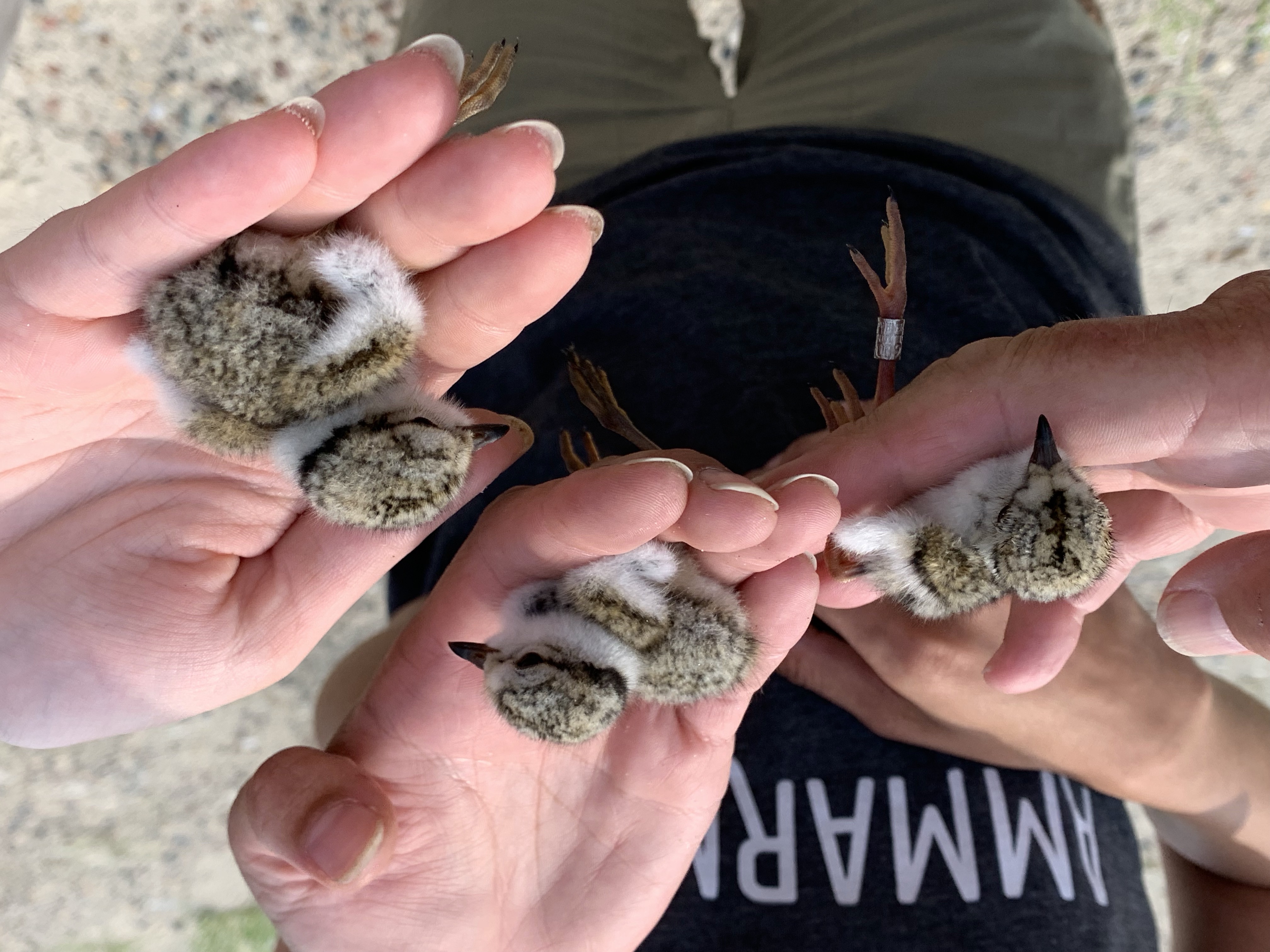 Tomorrow we are back at Kabeltrommlen, keeping our fingers crossed for many birds.

Another slow day at the station today, with ringing not available to me and Mathilde alone we were left to catch up on data during the day and general upkeep of the station/ lab etc. Mathilde went shopping and made a tart from the berries she foraged near Kabletromlen and in the morning I went out to Grenen for diverse Observations. I found some more new ringed plover chicks (Stor Præsteekrave unger)  which we hope to ring tomorrow with Lisa and I sat on the beach with 3 friendly sanderlings  (Sandløber) feeding no more than 5m from me at one point. Other than the usual gannets  (Sule), scoters (Sortand) and terns (Terne), there was not too much else to see. For the rest of the day I have been reading up on moult and ageing of birds in the hand and illustrations and Mathilde has also been reading. Kirsten has also kindly offered to cook for us this evening so we are looking forward to that. 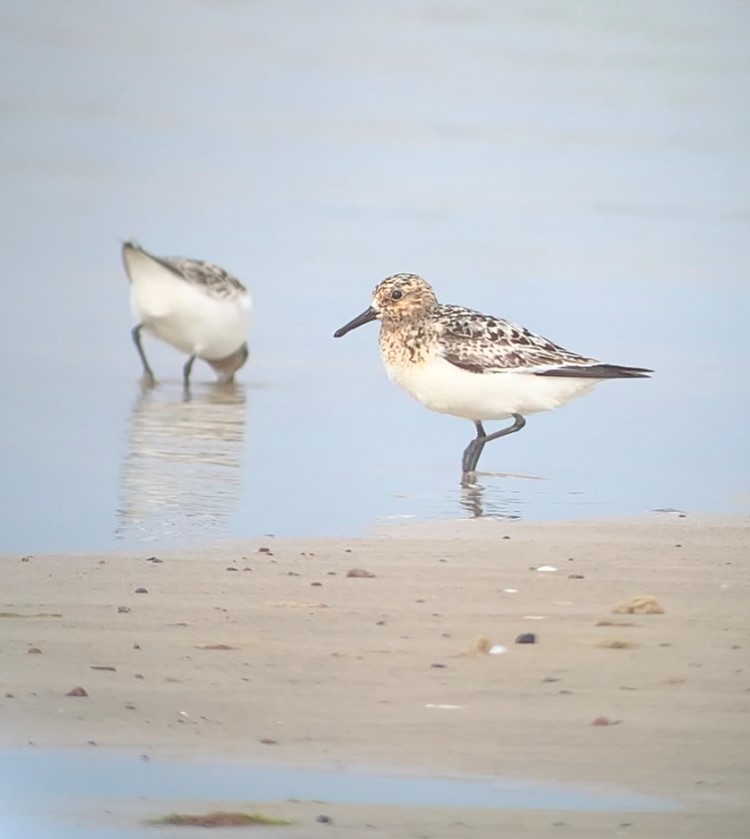 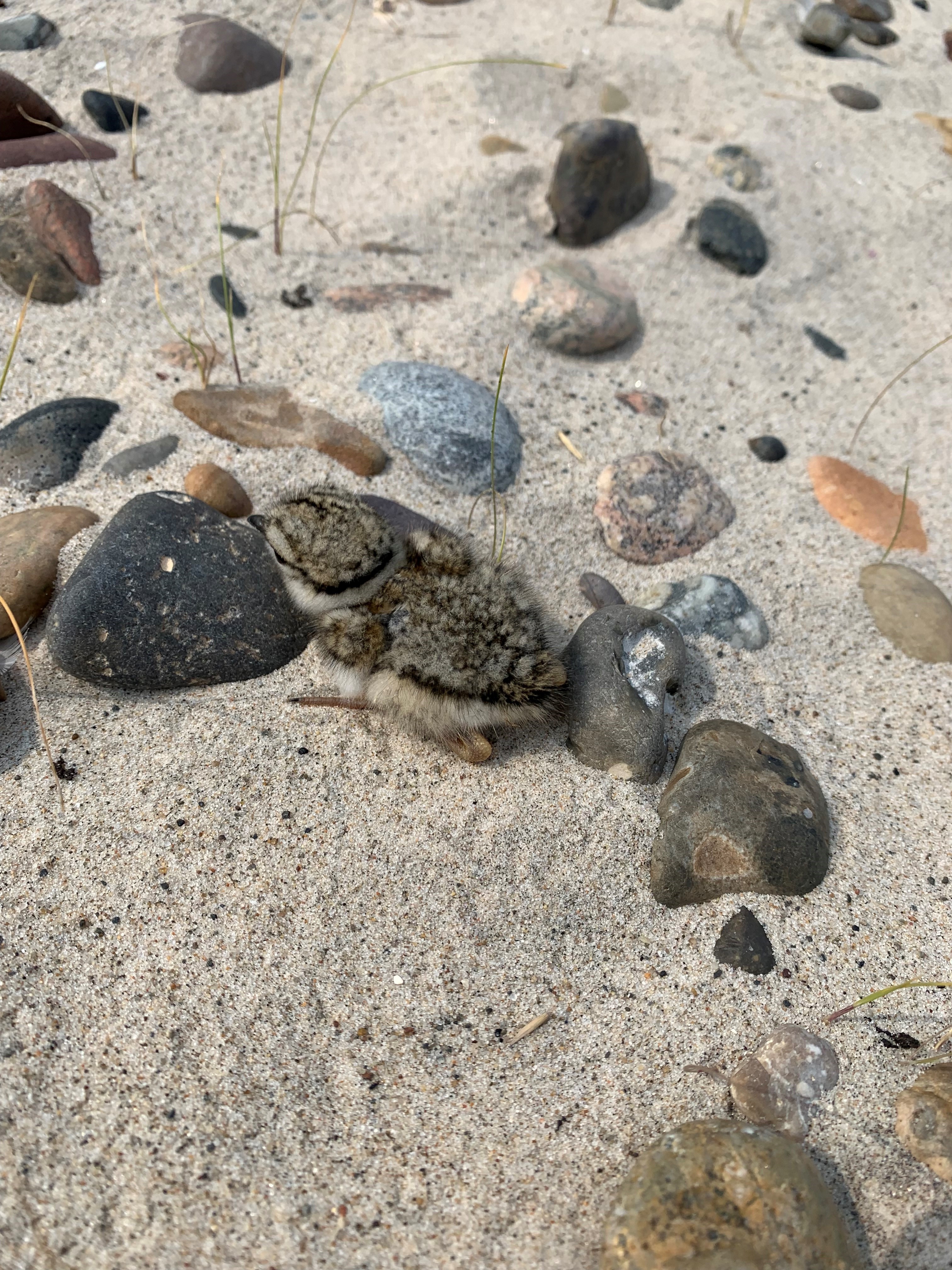 Today I was the lucky one who got to sleep the extra hour as Esben and Frank opened the net. I joined them in time for the results of the first round, mostly common whitethroats (tornsanger) and marsh warblers (kærsanger). The morning was quiet but with a nice variety of species: lesser whitethroat (gærdesanger), blackcap (munk), reed bunting (rørspurv)… The highlight of the morning came around 8 when we caught a green sandpiper (svaleklire)! A true beauty! We saw them fly around in the morning and hoped it would happen, so we were all delighted. 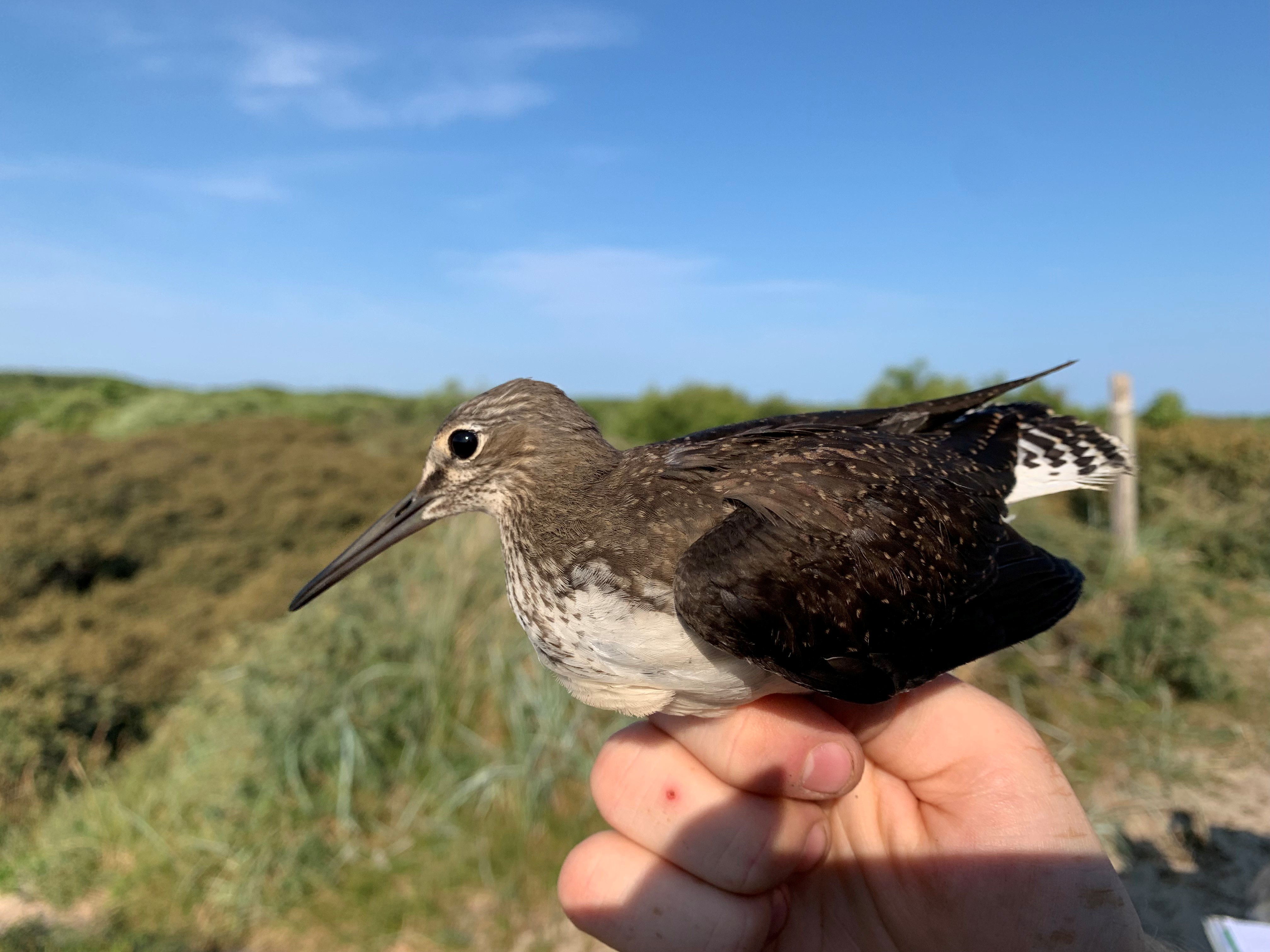 The rest of the day was turned to data entry and date checking. We all allowed ourselves a short nap as well. I spent a bit too long sorting out redcurrants I picked while at Kabeltrommlen but hopefully I’ll be able to make a tart with them tomorrow. Sadly, we had to say goodbye to Ebsen today. Thank you for the teaching and the laughs! 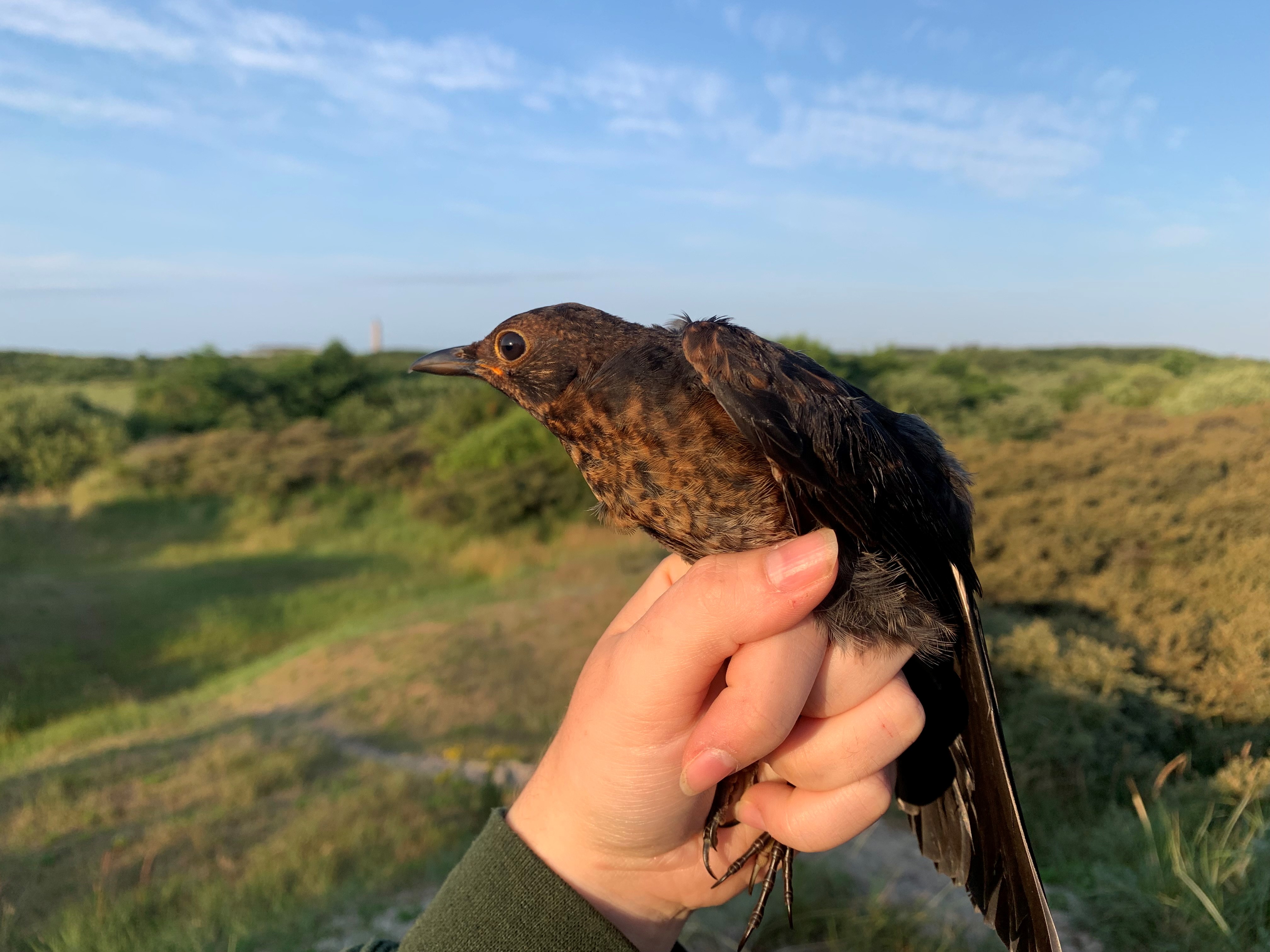 Esben got an extra hour sleep this morning as me and Mathilde opened the nets at Jenne Sø for the CES ringing, he then joined us for the first round but the following produced little birds with a Robin (Rødhals) and a few whitethroats (Tornsanger). After a few rounds, however, I got a bad migraine and had to head home. The others carried on however and although nothing majorly exciting as most days at Jenne Sø are like they did have a round of 8 birds. 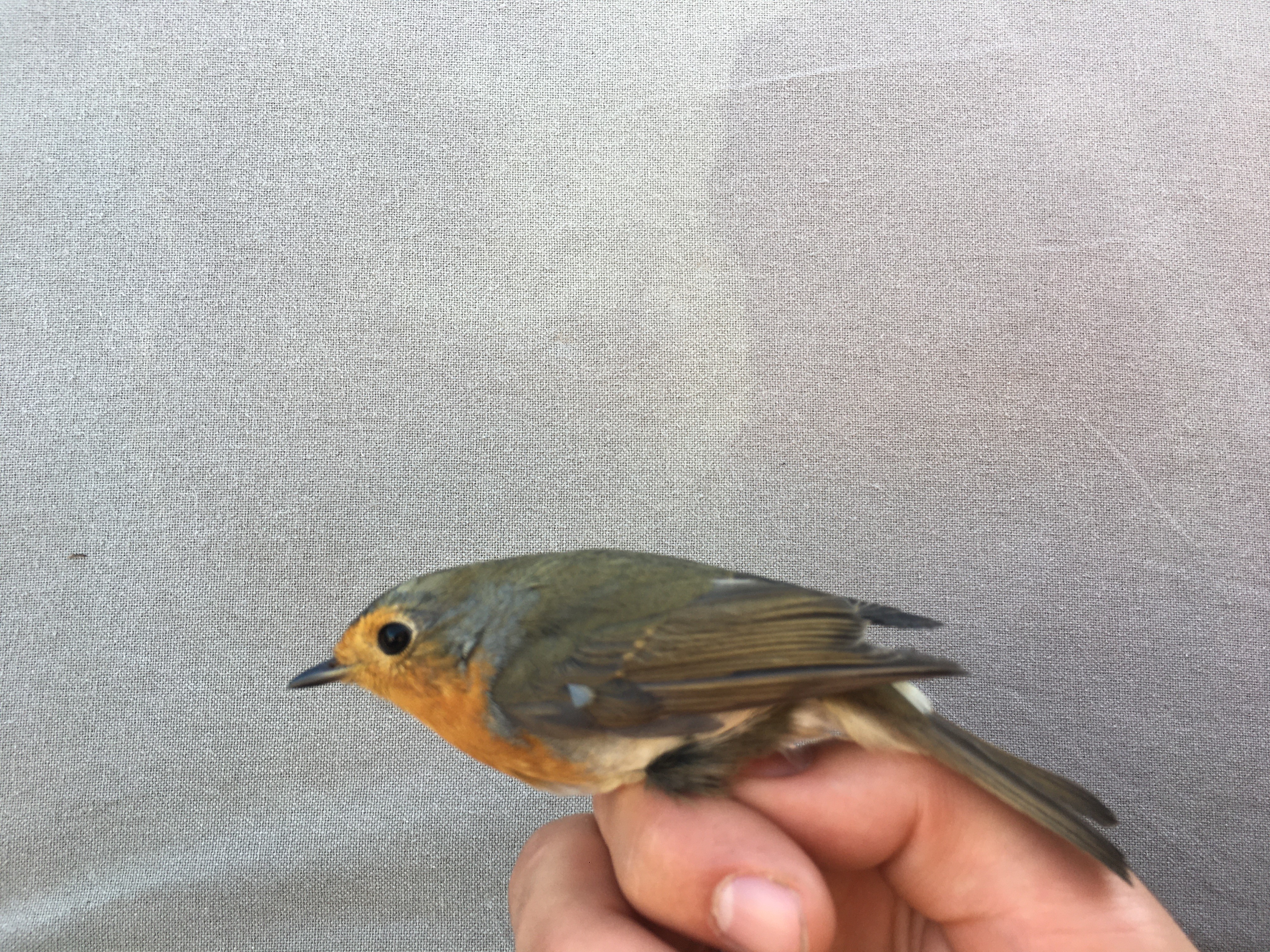 They then returned and had a nap and then we got on with cleaning the apartment. Me and Mathilde went shopping for the next few days and we said goodbye to Lauren, Niklas and their kids. The rest of the evening will then consist of data entry, ringing checks and sorting through the picture archive.

Tomorrow we will head to Grenen for morning ringing. 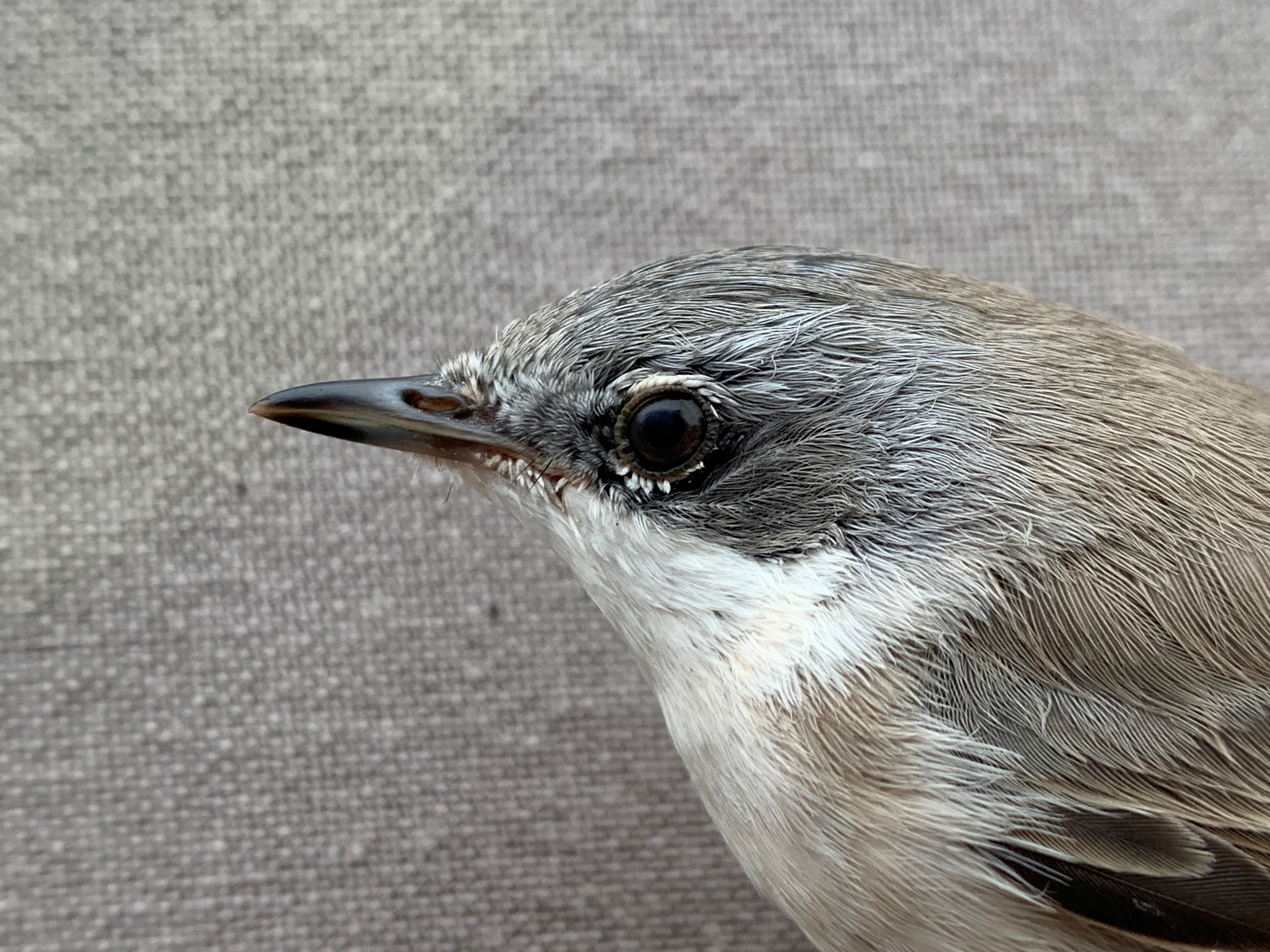