Even today the weather is not on our side. It rains, and the forecasts provide rain and wind all day, and unfortunately it is not possible to open the mist-nets today. While we have breakfast watching the sea from the light house, we see some red-throated loons, terns, gannets, common scoters, eiders and several species of gulls. Simon and I leave at 8:30 to bring two bikes to be repaired. Upon returning Simon shows me some interesting places to see birds in the northwest part of Skagen.

Later we return to the Lighthouse, we find Peter engaged in his outdoor tasks, and we also start ours. Today is cleaning day! In the afternoon, Peter and I clean up all the rooms and the kitchen. For dinner I prepare Italian-style pasta with mushrooms, and Simon cooking Danish sausages, a perfect match! After dinner we plan activities for the next days, hoping for good weather. It was not a good day for the observations, but a profitable day for logistics. 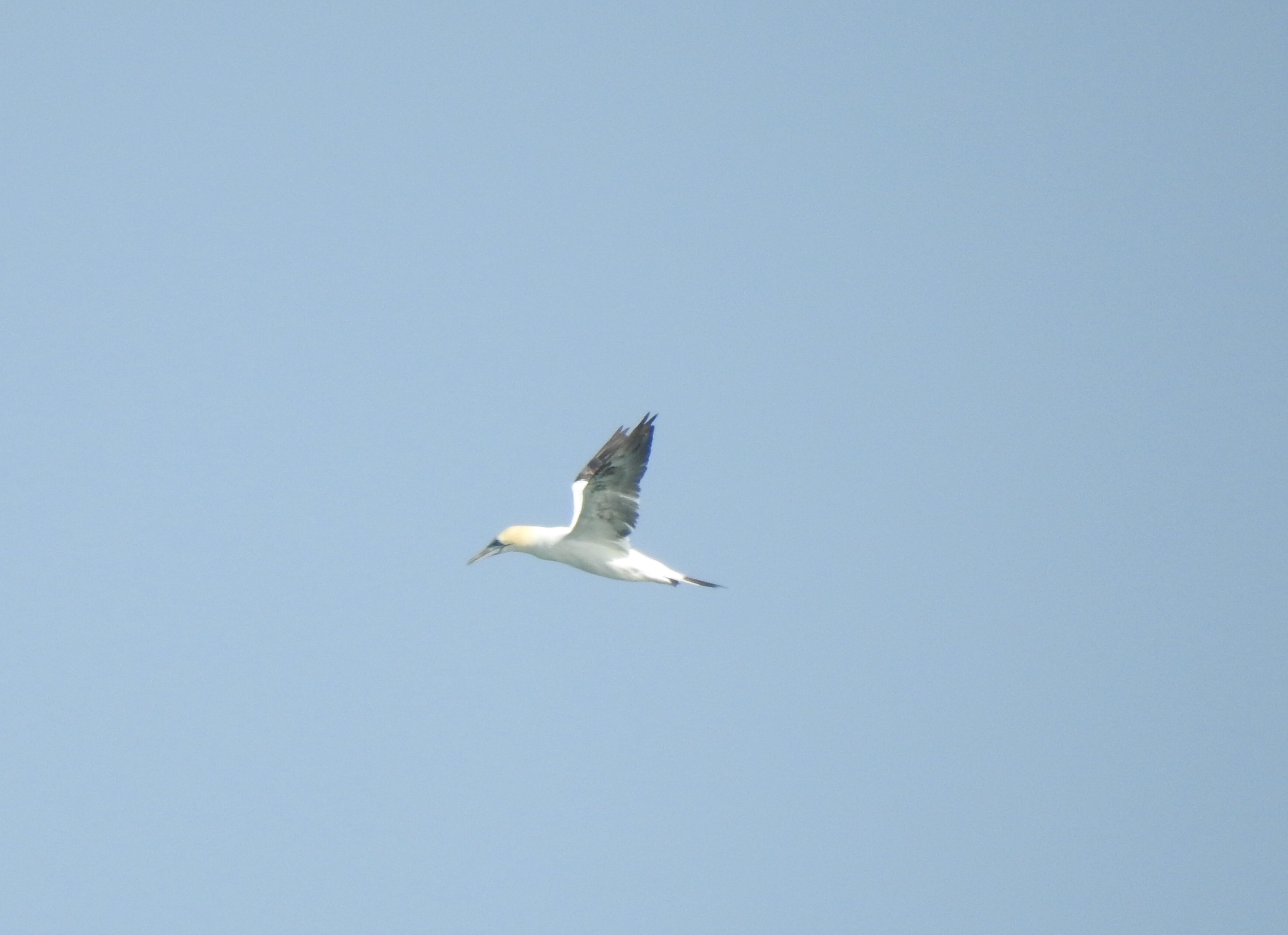 Today there is definitely a lot of wind, and this does not allow us to open the nets for ringing. So at 9.30am I go to monitor the cormorant colony, this is not easy in the strong wind but at least it is sunny. There are new empty nests, probably predated by the red fox. Other species observed at the lake include red necked grebes, that also seem to have lost their nests, common gulls, herring gulls, great black backed gulls and various other species including a passing honey buzzard. I go back to the lighthouse around 11am and find Peter and Simon working on their computers for the various indoor tasks and I join them to transcribe the cormorant data.

In the afternoon, Peter goes to a tower not far from the station to make observations. Simon has a meeting with Terje Axelson from Store Færder Bird Observatory to discuss radio tracking. I rest an hour and then I go into town on the bike. It was not very easy in the headwind, but on the way back I did it in a sprint! For dinner this evening Peter decides to experiment with a kind of spicy minestrone, it was very good! Accompanied by an excellent red wine. In the evening there is still the strong wind which has lasted all day, and tomorrows forecasts are not good, but we are positive! 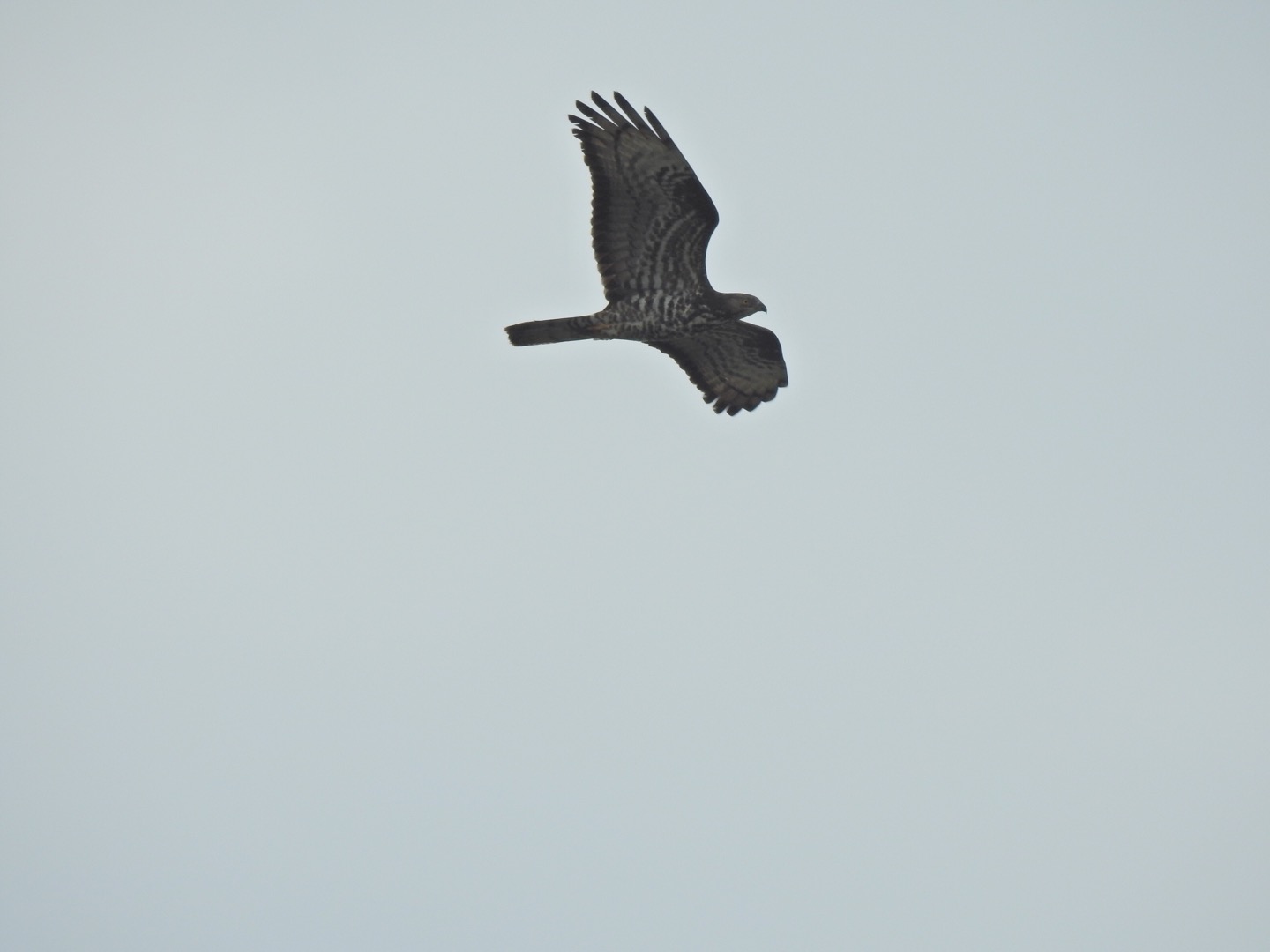 The wind really picked up throughout the night, which meant ringing in the morning was not possible. Thankfully we had a group of schoolchildren arriving at 11 for a ringing tour, so heading to Grenen wasn’t realistic anyway. As we had time to spare, I went out to the coast at 9.30 to look for the goosander from the previous evening, which was swimming around the rocks on the beach, which was nice. It’s an unusual sighting at this time of year, but not unsurprising as the males don’t help in rearing the young, so coming down here to moult, where conditions are slightly more hospitable is a wise decision.

The ringing tour started at 11.30, though the wind didn’t provide much optimism for catching anything, However we were lucky and there was a whitethroat on the first round, and a lesser whitethroat on the second round. Showing the children how we ring birds with an actual bird was very gratifying, and they all seemed very interested. On top of that the whitethroat was a Danish retrap from elsewhere in Denmark. The weather really set in after that and we retreated inside to get one with various indoor tasks. It seems the ‘Skagen summer’ has finally arrived! 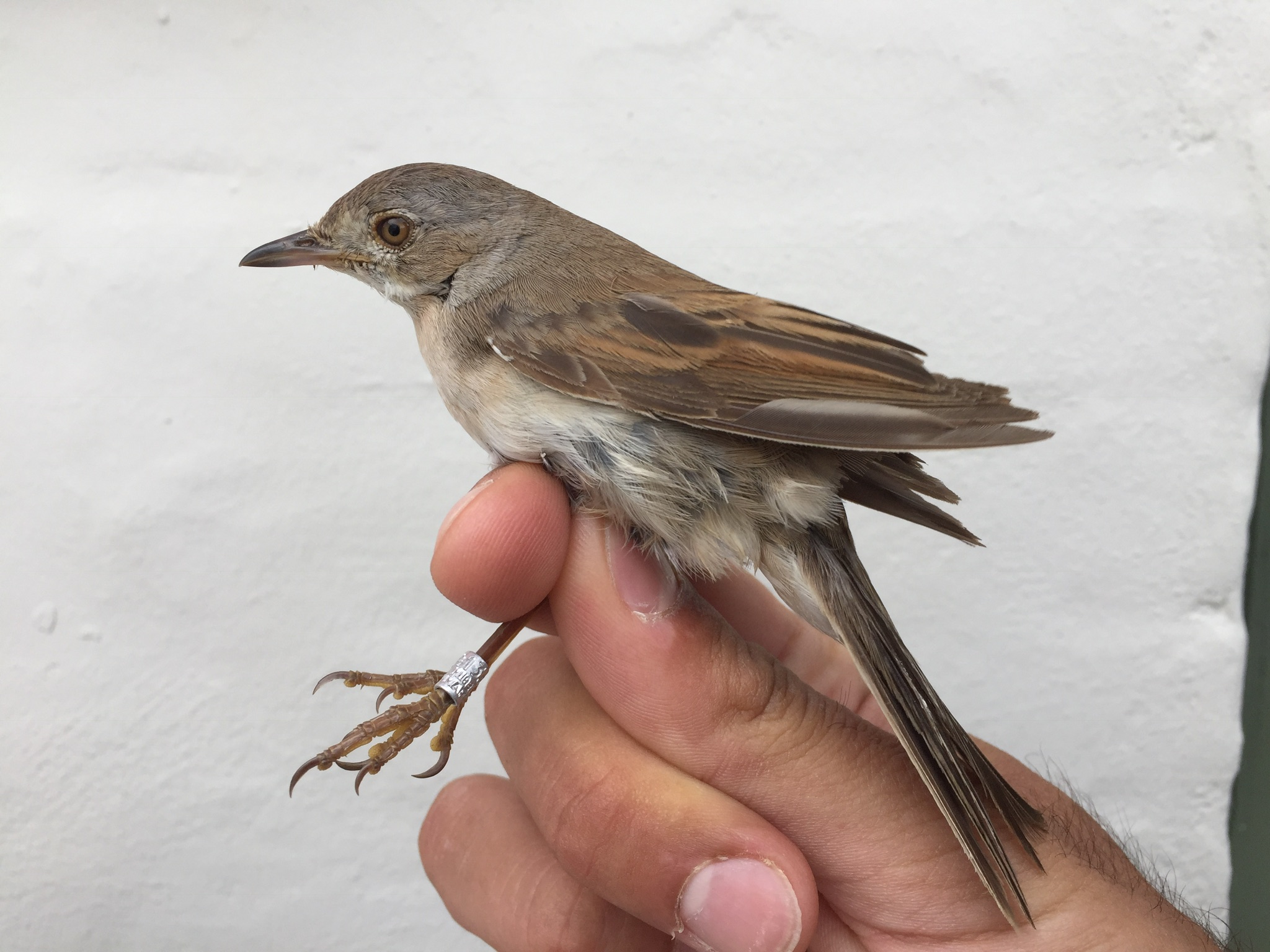 Farewell to Kirstine . for now . .

Off to ring at Grenen this morning, with some optimism, as the rain in the night and the light wind would be very good for any scarcities hanging around the area.

As it turned out we did catch some unusual birds, a returning failed breeder (presumably) pied flycatcher and a sedge warbler, the first to get ringed here this year. Aside from that we caught another 20 birds, which, whilst it was the largest number in weeks, was still not as good as we’d hoped, and without the major ‘rare’ that June can provide. However it was a very educational session, with a new bird in the hand for me (sedge warbler) and one for Michele (lesser redpoll). A nice male reed bunting was also a nice catch. Kirstine was also getting to grips with bird handling and extraction, and the fact that we were catching birds for a few hours, allowed us to show her some of the grips and positions for holding birds as well as the difficult species and how to separate them in the hand. Just before we left, the very tame fox from the ridge at Grenen appeared and followed us around for a bit, far too tame due to irresponsible feeding, we can only assume.

This was Kirstine’s last day, so after we arrived back at the Obs, she hastily typed up her last diary post and packed her belongings, before helping both Michele and I with entering ringing data and sorting the photo archive.

Heavy rain and wind put off any afternoon birding, so I occupied myself with cleaning the guests apartment, before continuing with computer work. After a quiet dinner Michele and I chatted about the differences in ringing licensing across Europe and North America and about some of the tricker birds we’d had in the hand over the last two days. Just before we retired for the night, Michele refound the male goosander he’d found earlier in the week, just offshore from the Obs. Despite dashing out 3 minutes later, I did not see it that evening. 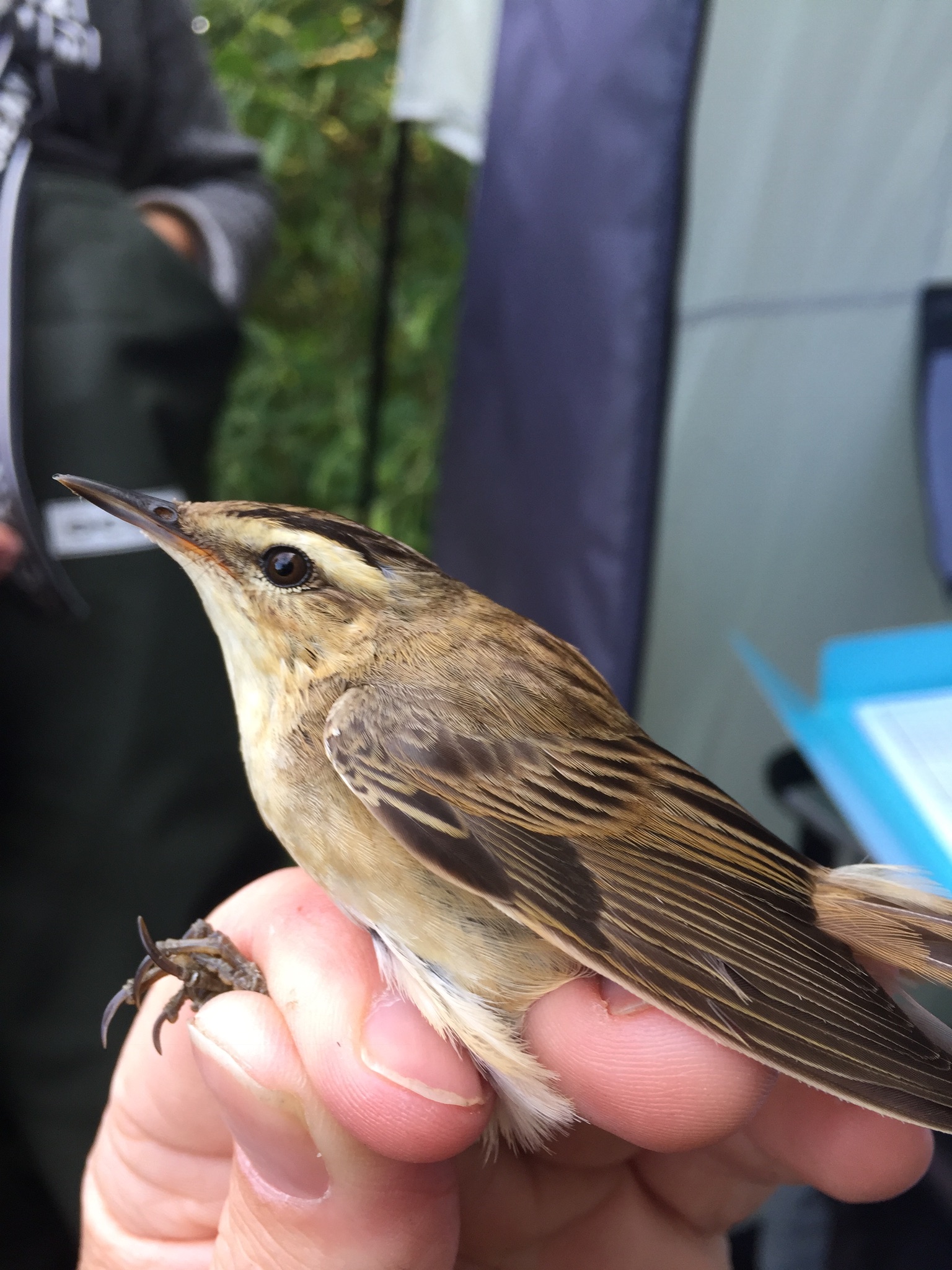 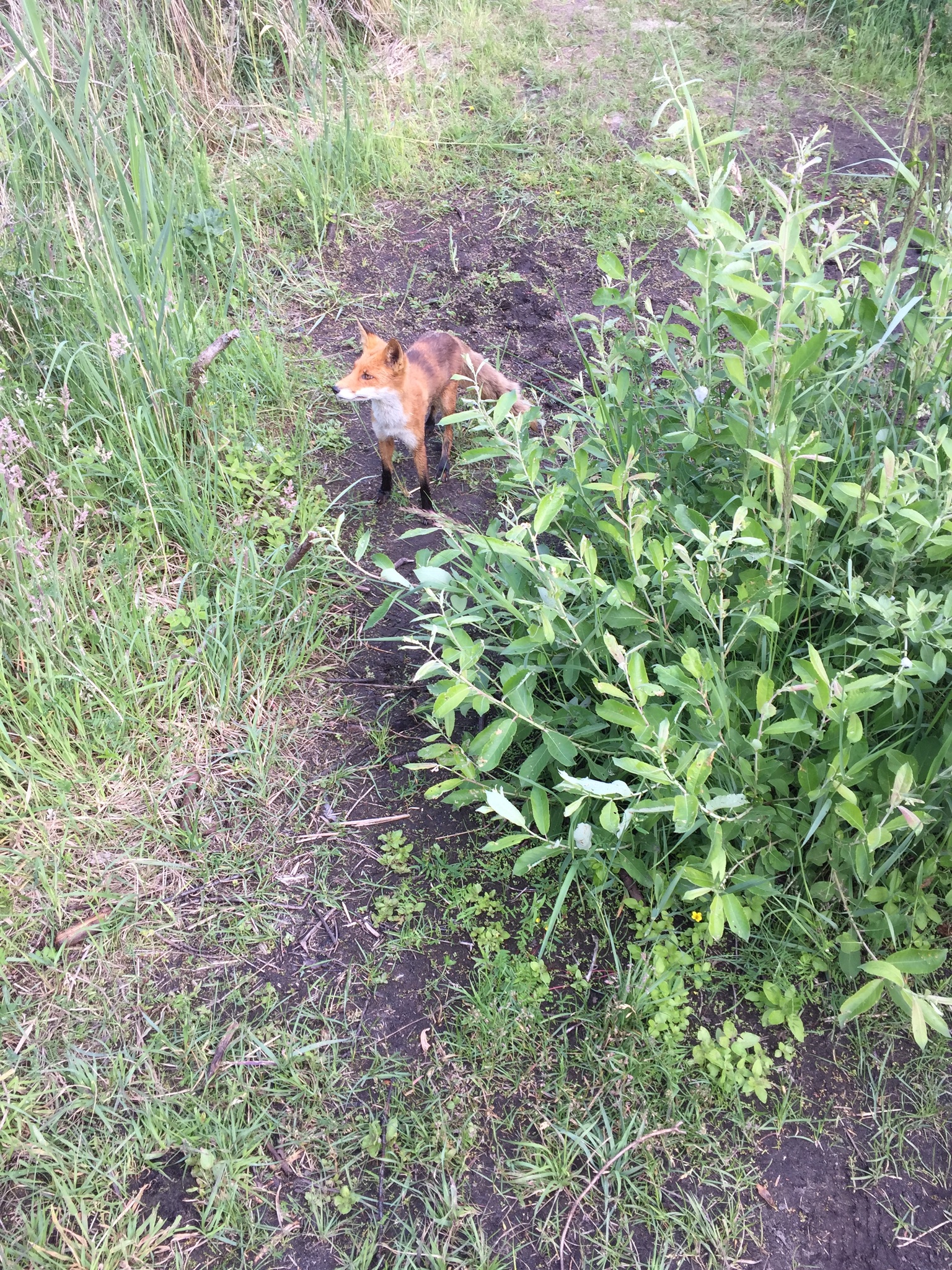 A day of constant effort . . 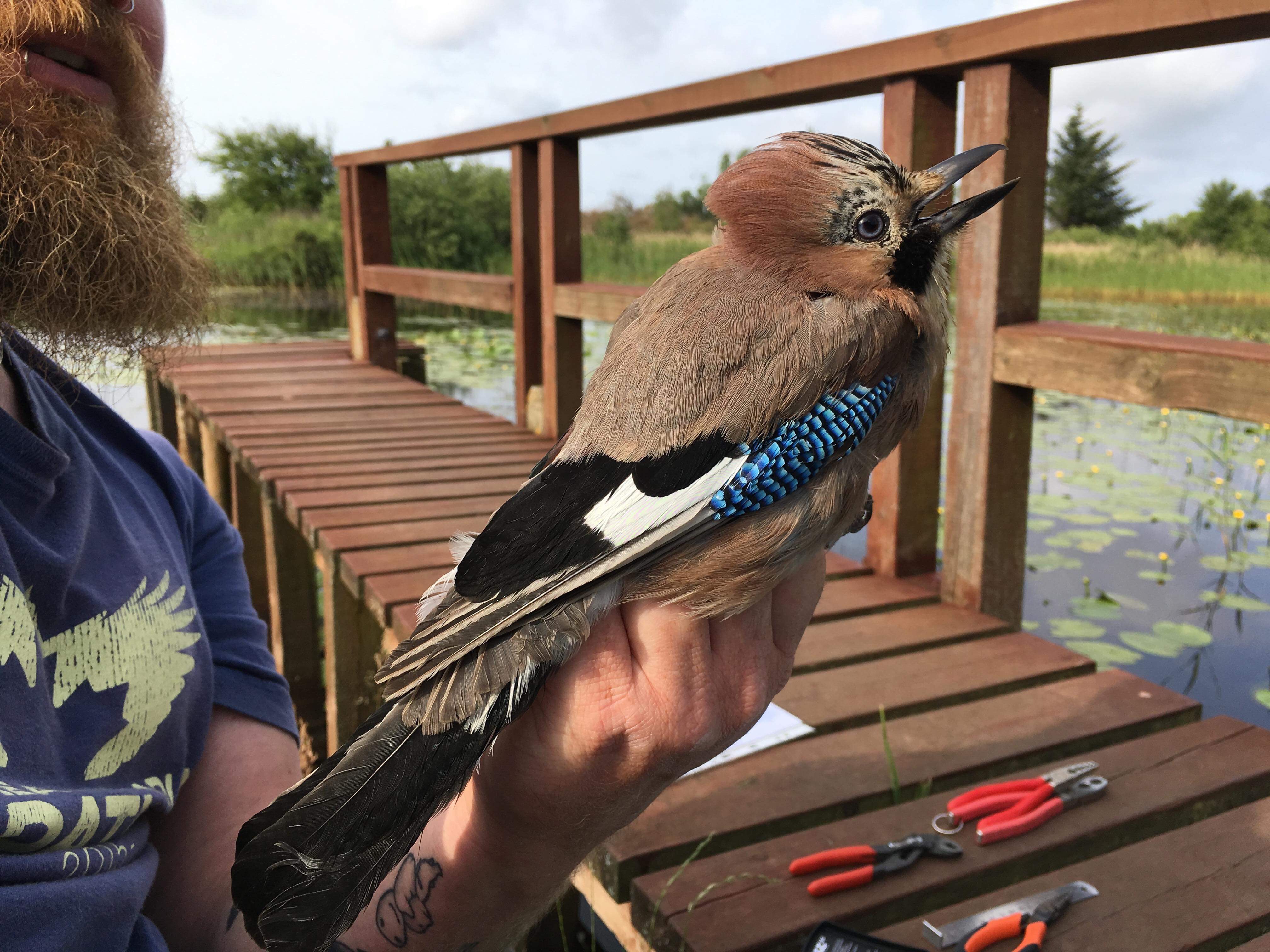 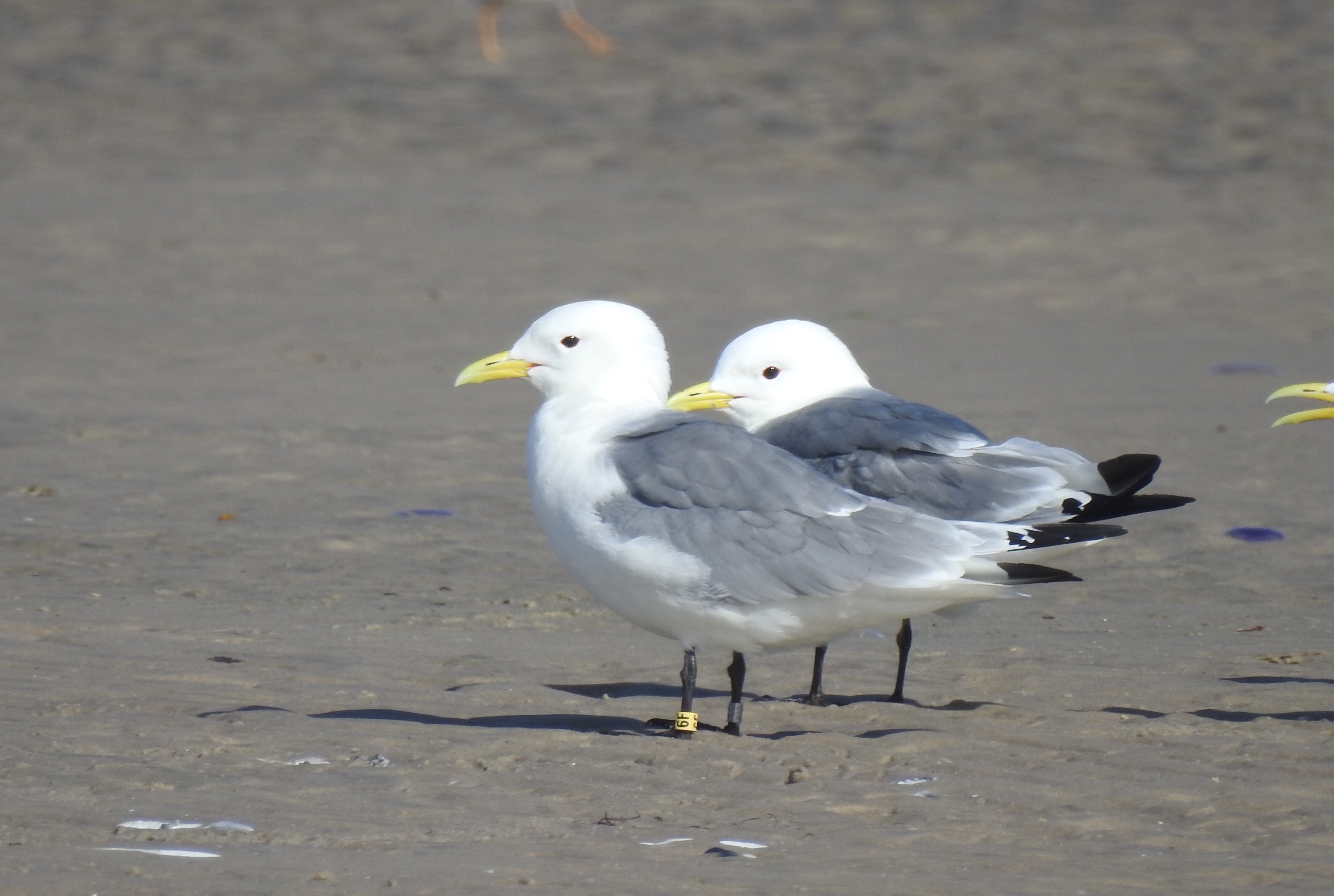 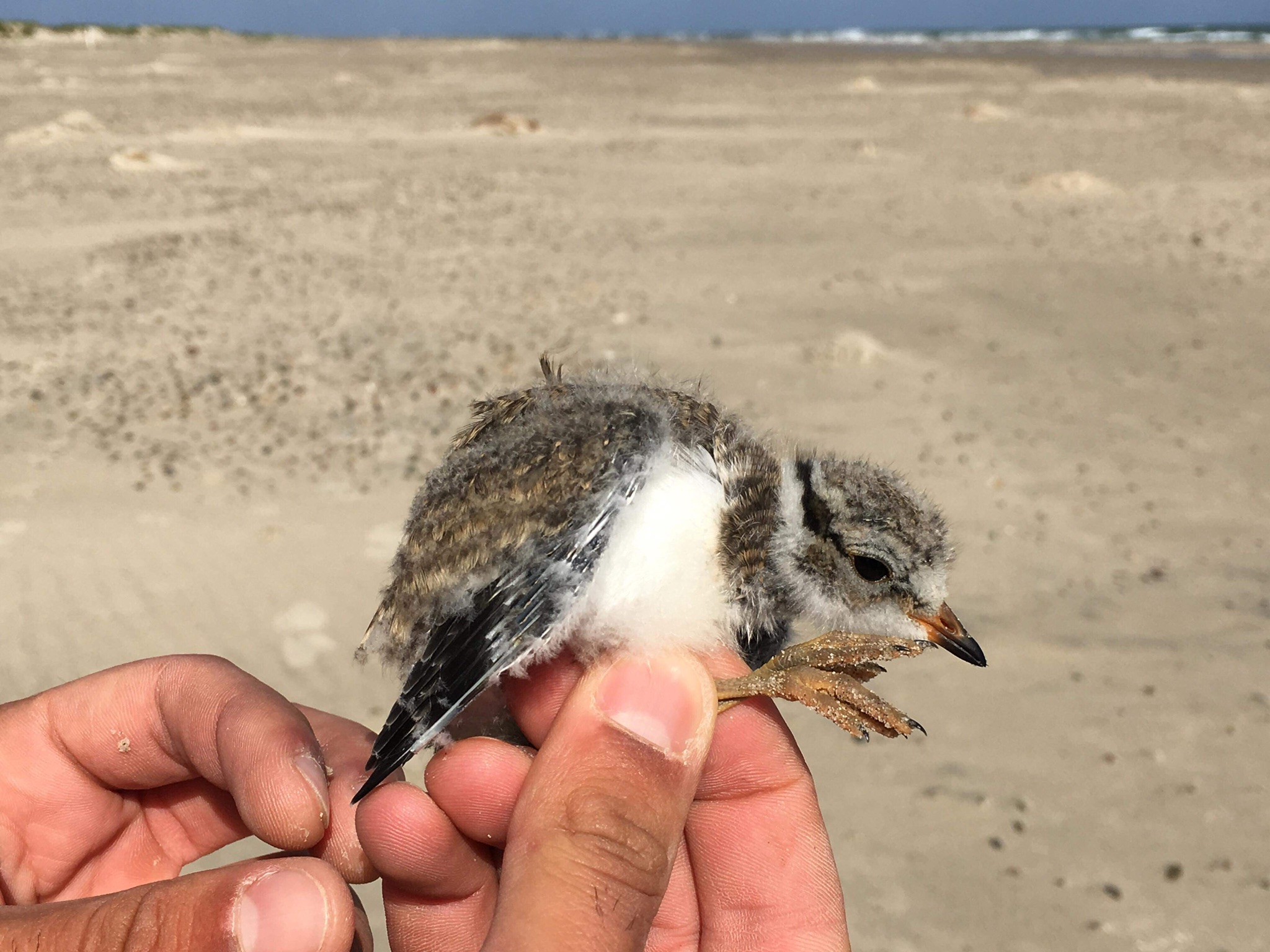 What the wind blew in. 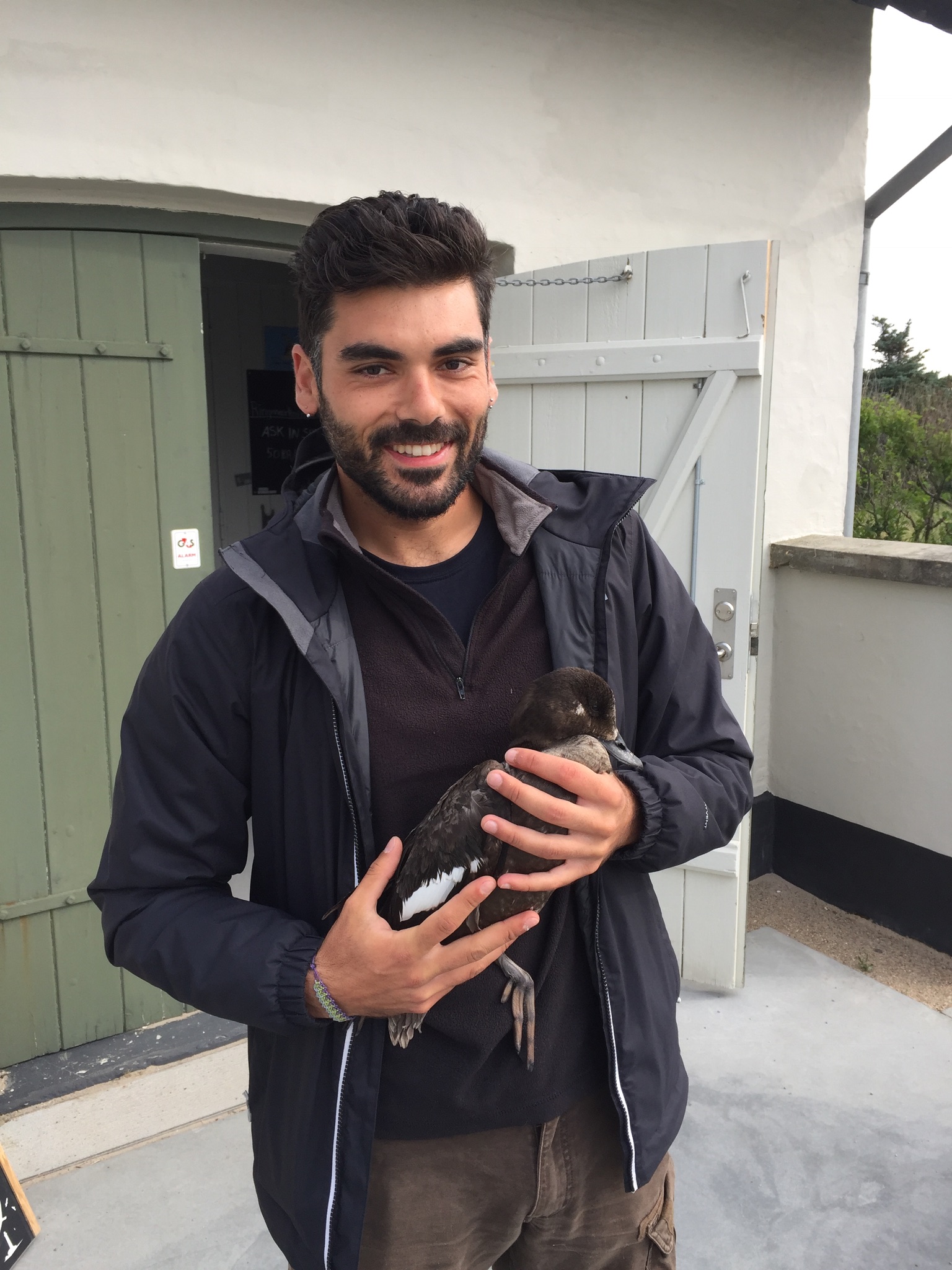 The day started (in fact didn’t finish until) at 12am, with us all waiting in the dark for nightjars to fly into mist nets. Unlike last week our catch rate was only 1 bird for the entire time we were there, but just seeing one in the hand was a great experience for all of us, despite the fact we’d done this less than a week ago.

4 hours later (!) Michele and Kirstine were opening the observatory garden nets, for a brief attempt at ringing. 2 birds were caught. I on the other hand was leading a tour for a pair of American tourists, who also managed to see the bird ringing before we went. As expected it was a quiet tour, but as they were not from Europe, pretty much all the birds were new for them. The eider were their particular favourites. The most important and generous part of the morning was when Arne Rasmussen donated two bikes in very good condition to the Observatory. Michele was most pleased, especially as he had to cycle back from the cormorant with a totally flat tyre today! Thank you Arne, they’ll be a great help.

After our respective duties, we all hit the sack for some much needed shuteye, after
less than four hours sleep! Refreshed, we undertook the weekly cleaning of the apartments, a job made much easier by the fact that there were three of us to share the tasks. Michele and Kirstine then headed to the cormorant colony to undertake the bi weekly counts and then to town for much needed supplies, both edible and electrical. I updated the daily log. Kirstine cooked us some delicious veggie burgers for dinner (very nice not to be the only vegetarian in the Obs, even if only for a week).

The weather was looking particularly bad for the morrow, so with ringing (if any) restricted to the Obs garden, I decided tonight was a good night to go out listening for spotted crakes, or Savi’s warbler or even better maybe a river warbler!

I was wrong. The wind was too strong and I heard no birds at all. However mammals were well represented with four hares, and roe deer AND my first ever live polecat! Presumably the same individual Morten saw several weeks ago. Great sighting however and well worth the birdless bike ride! 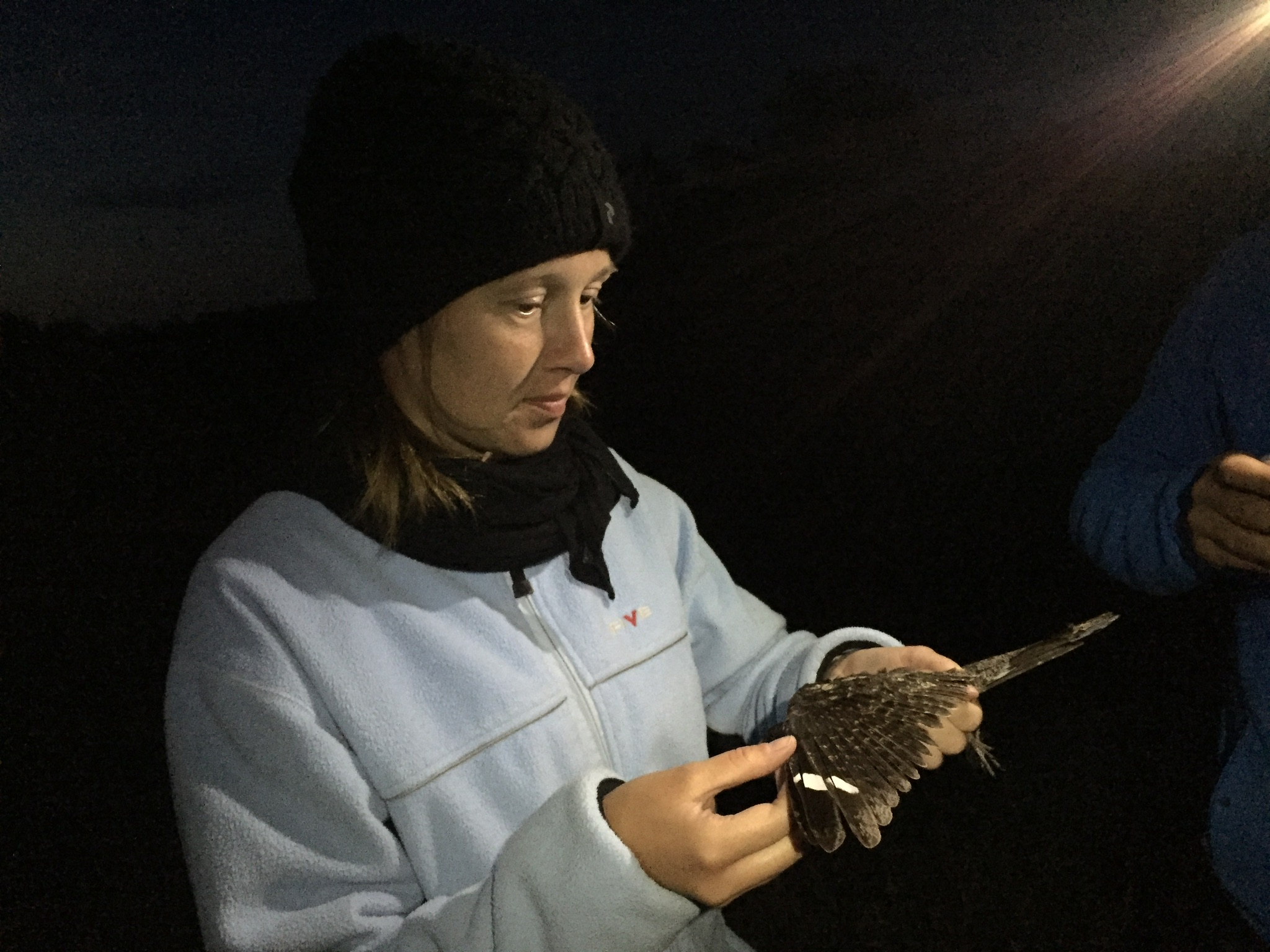 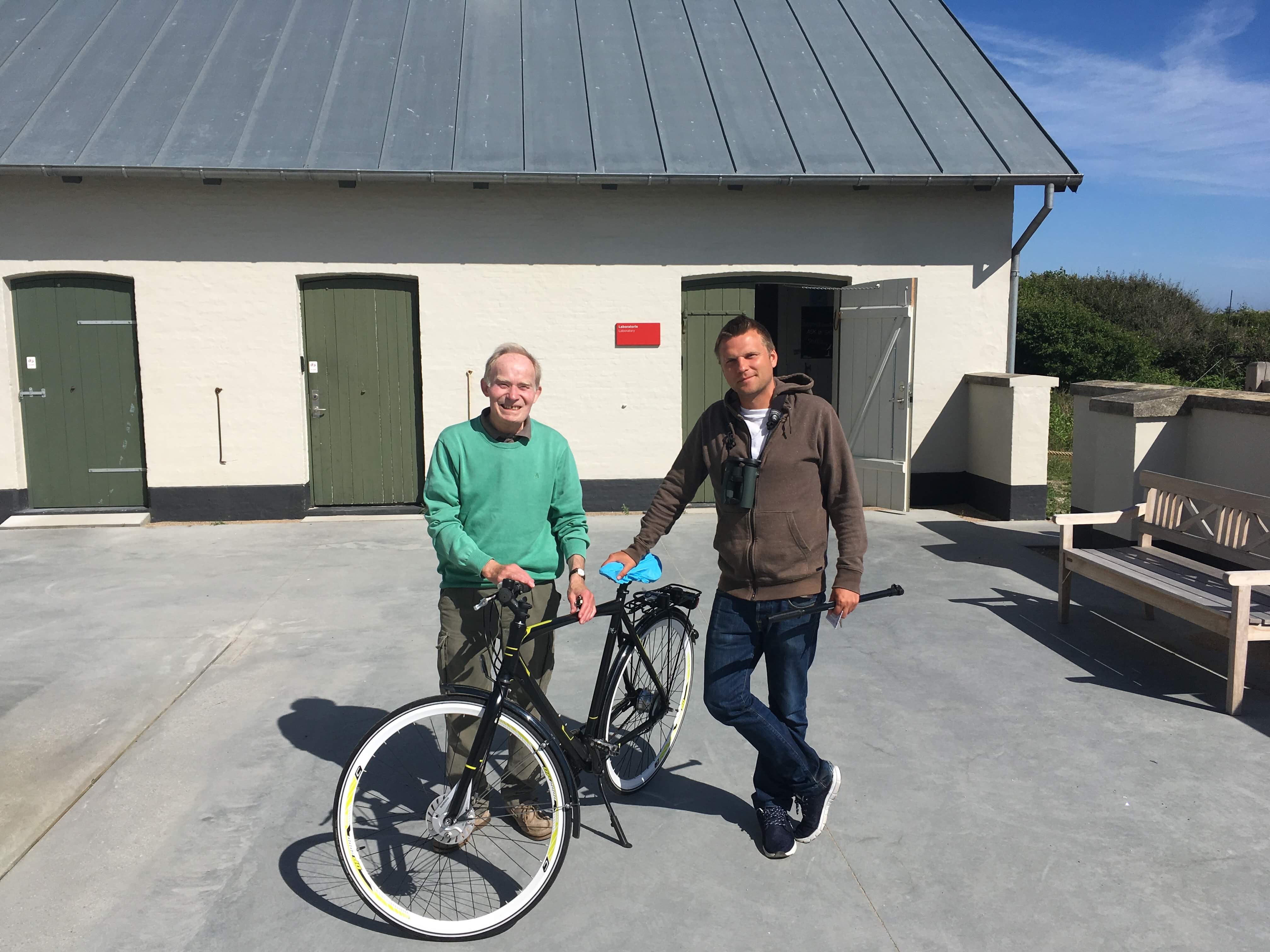 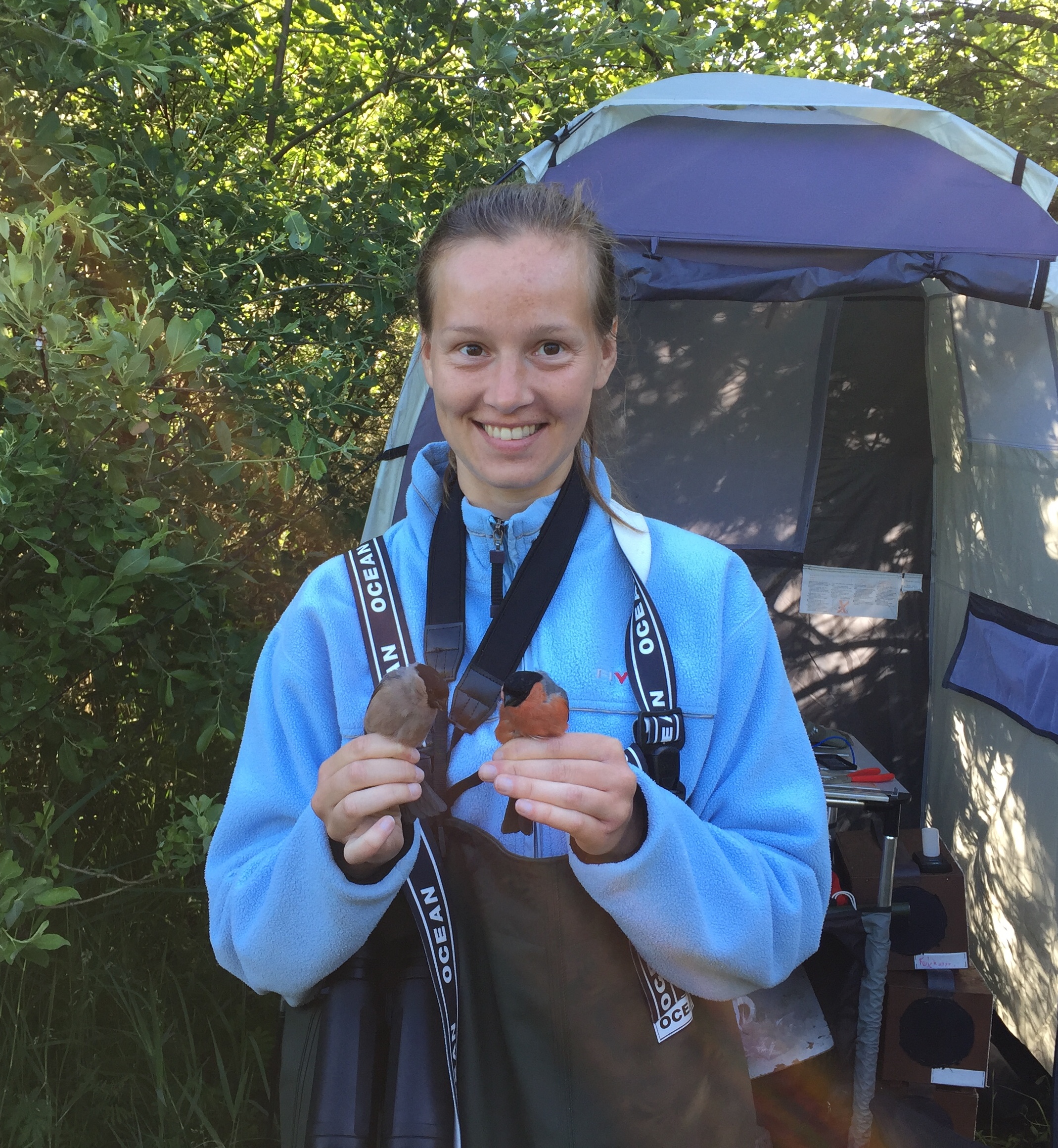 Admin and a new addition to the team.

Wind! It was too windy to open any nets and really too windy to visit the cormorant colony today. So after an extra hour or two in bed (snatch those mornings when you can at a bird observatory!) it was time for lots of computer admin. Ringing data, Dofbasen and diary posts were the order of the morning, along with photo archive work.

Kirstine Lund arrived in the afternoon, she’ll be working with us for a week. After working our way through double checking the ringing data, we sorted our ‘in the field’ paperwork before having a moult lecture in the birders club from Simon. Sadly it was cut short for me as I had to cook dinner. After dinner, Simon, Michele and Kirstine went out for an evening seawatch and found Michele’s first Canada goose and Arctic Skua. Not bad for mid June!