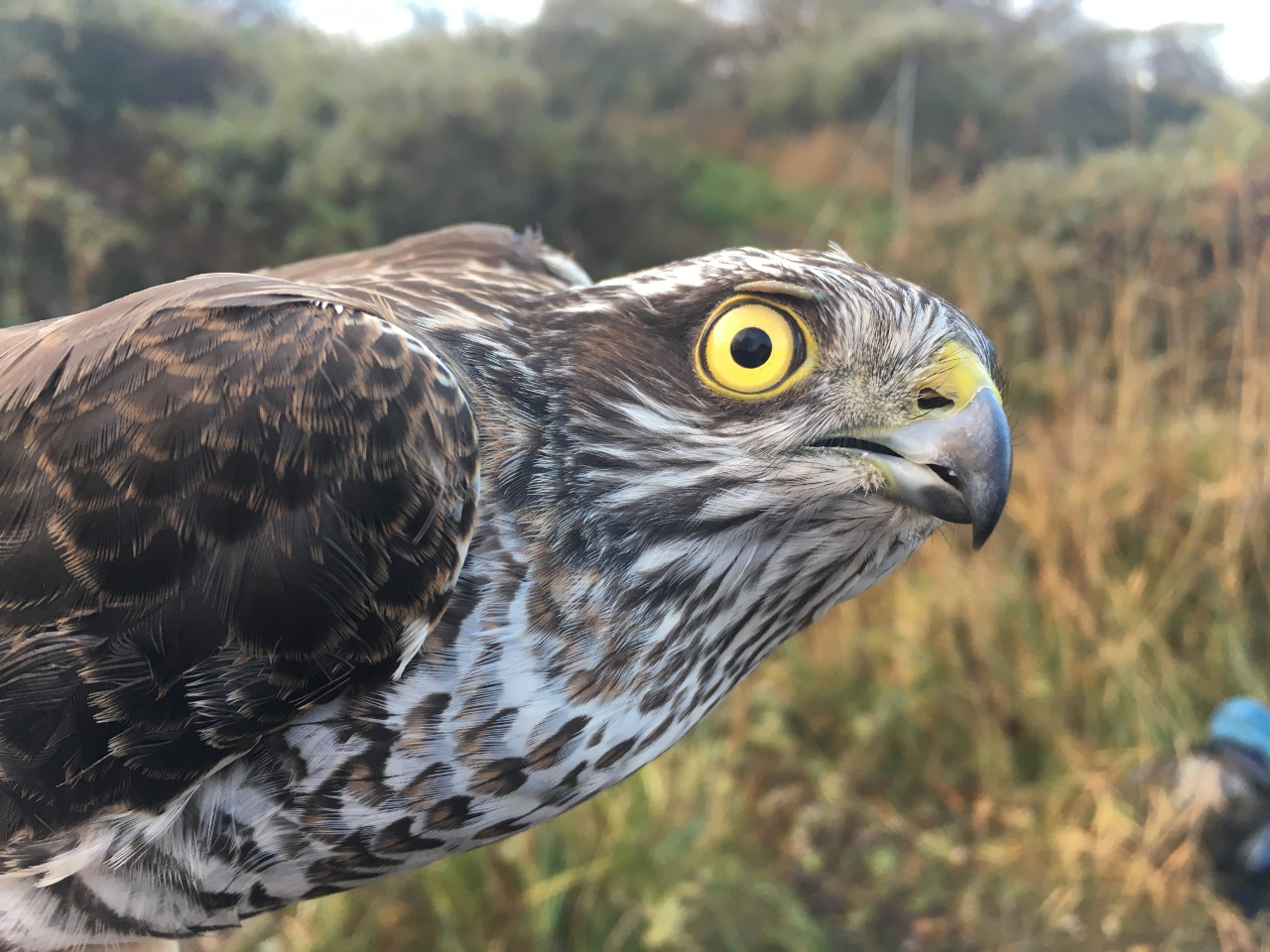 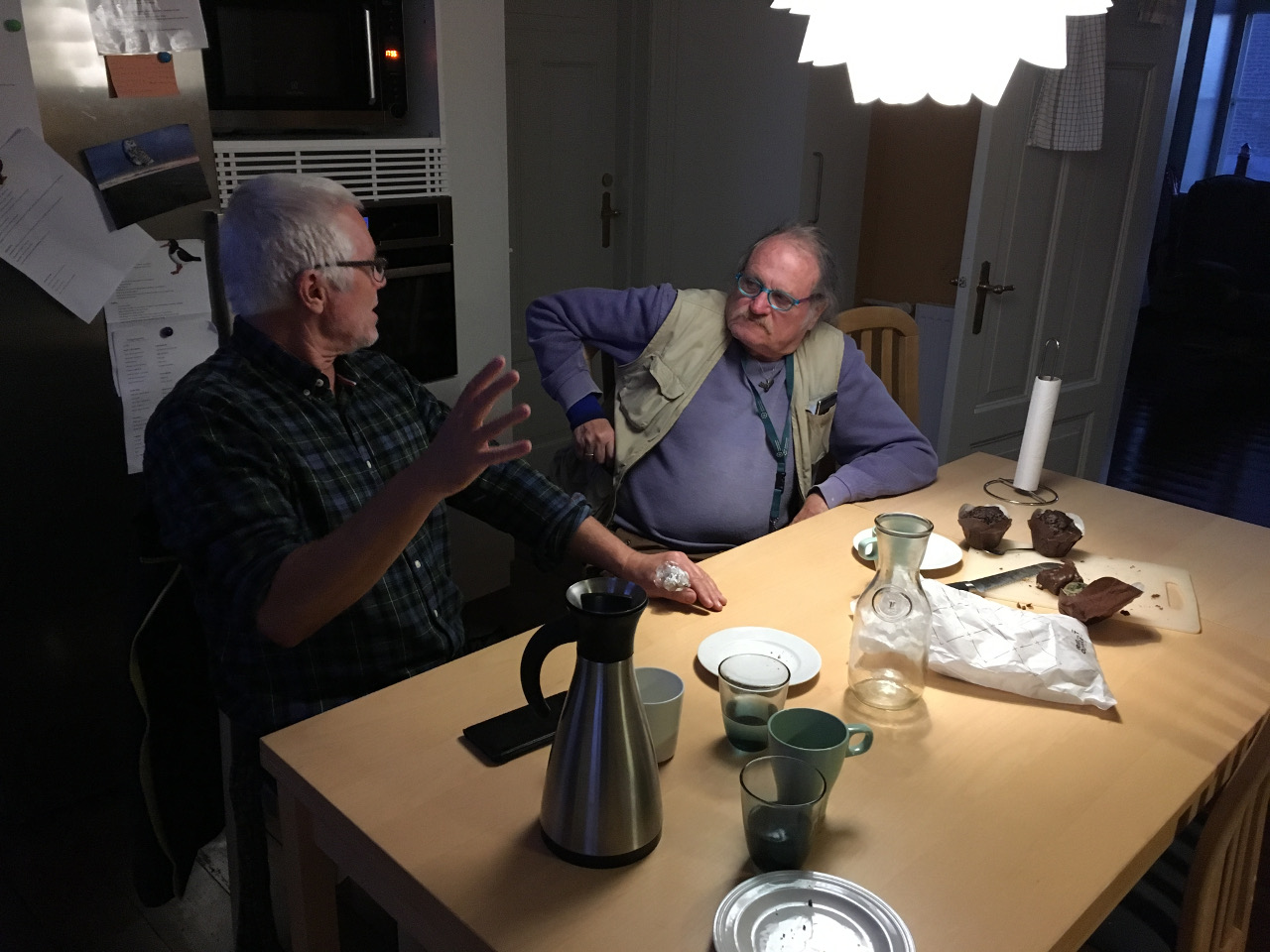 Første dag tilbage her i efteråret!

Today was mine and Sarah’s final day at the Fuglestation. At dawn, we headed out with Helga for some seawatching with Knud at World’s End, where we did a short Facebook Live video explaining a little more about how and why we count seabirds. You can view the video on our Facebook page.

The rain set in by mid morning, and so the rest of the day was taken up with administration: cleaning the apartment, Birders’ Club and the Lab, catching up with our last pieces of data entry and finally packing our bags.

This evening (as if by magic!) Gustav appeared again, this time with his friend Kenni for a couple of days stay. Helga and Kristian cooked us a great final evening meal before Gustav of course treated us to another mind-bending magic show which involved eating cards and shooting rope. Next time Gustav I’m hoping for a balloon skægmejse…

Thanks to all the great people we've met here for making it such a memorable month, especially our fellow volunteers and all the local birders for welcoming us so warmly. We hope to see you again one day! 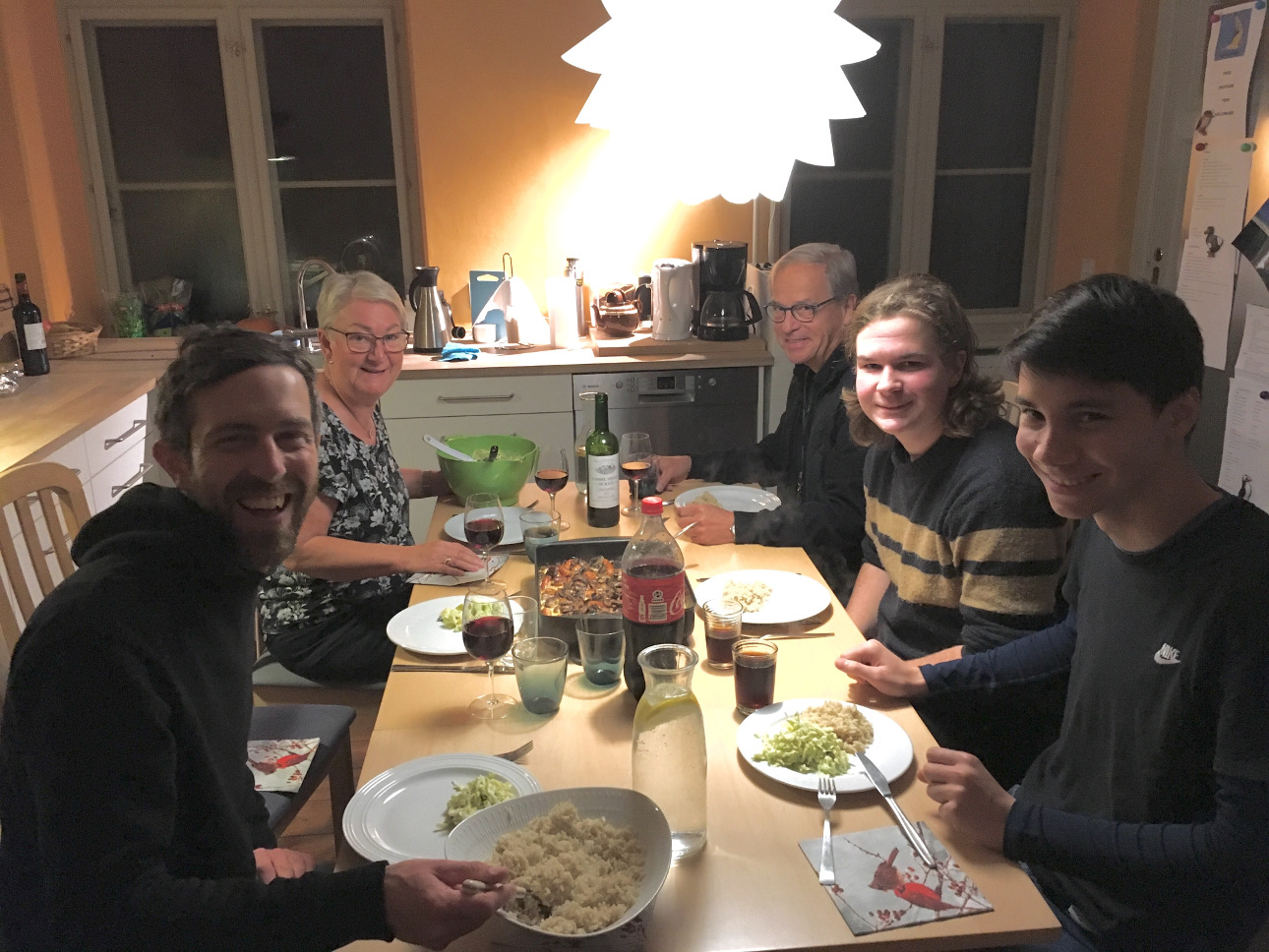 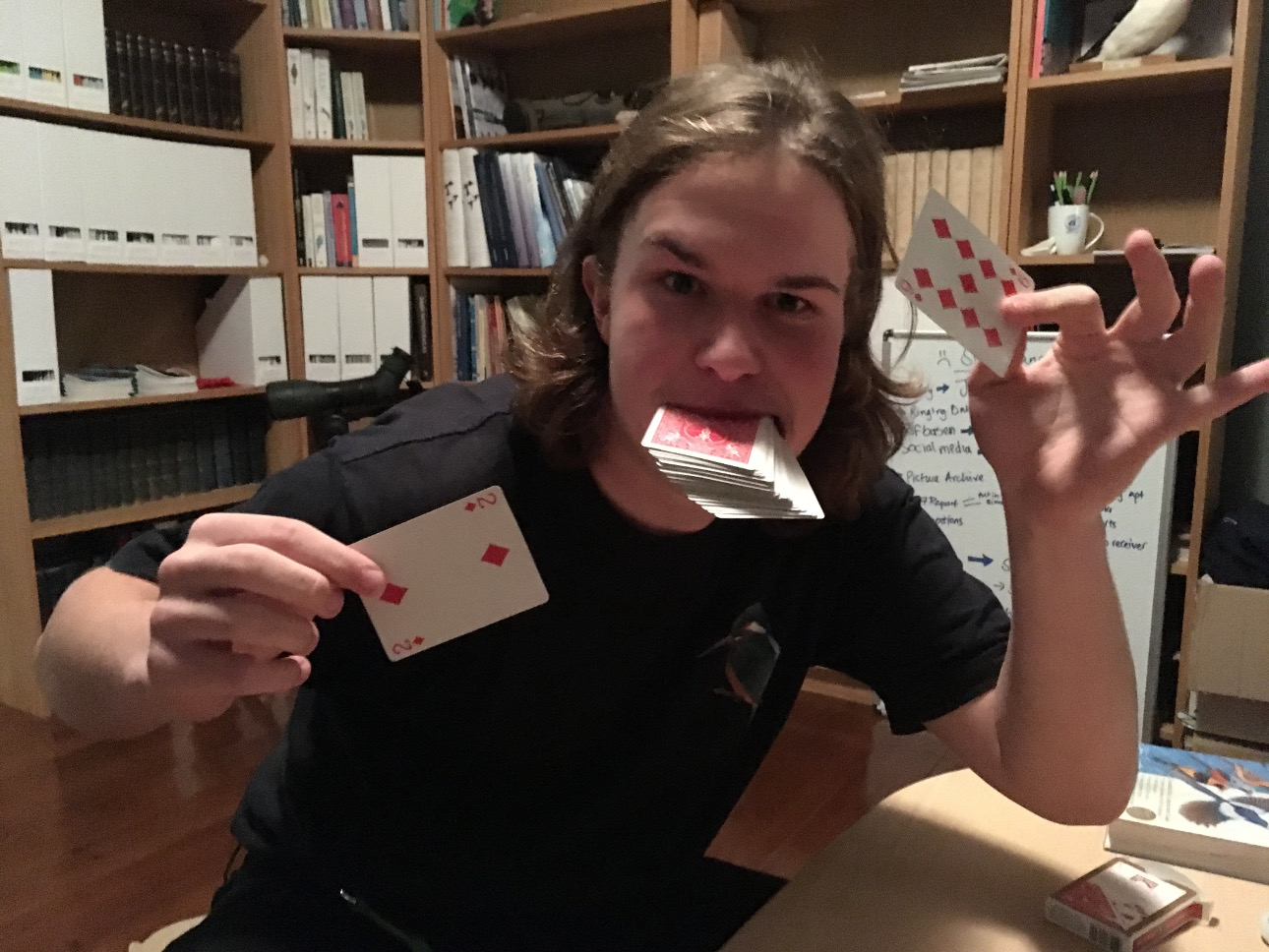 A beach full of buntings

Another windy day today so unfortunately no ringing planned. Instead, James and I went out to observe with Rolf for a few hours. James spotted a Bittern (Rørdrum) which was a bit of a surprise; they are not seen here much over the autumn/winter months and this was only the second bird seen this autumn.

After leaving Rolf, we met up with Helga and Kristian and did a tour with them along the beach to the tip and back to the observatory via the tractor track. The sun was shining, the birds were very obliging and we managed to tick off a few new species for Helga and Kristian during our walk. First stop was for Red Breasted Merganser (Toppet Skallesluger) and Purple Sandpiper (Sortgrå Ryle) on the beach and we also spotted our old friend the Knot (Islandsk Ryle) from last night! It was great to watch it feeding on the beach, whilst sporting a new and dainty little silver anklet on its right leg! 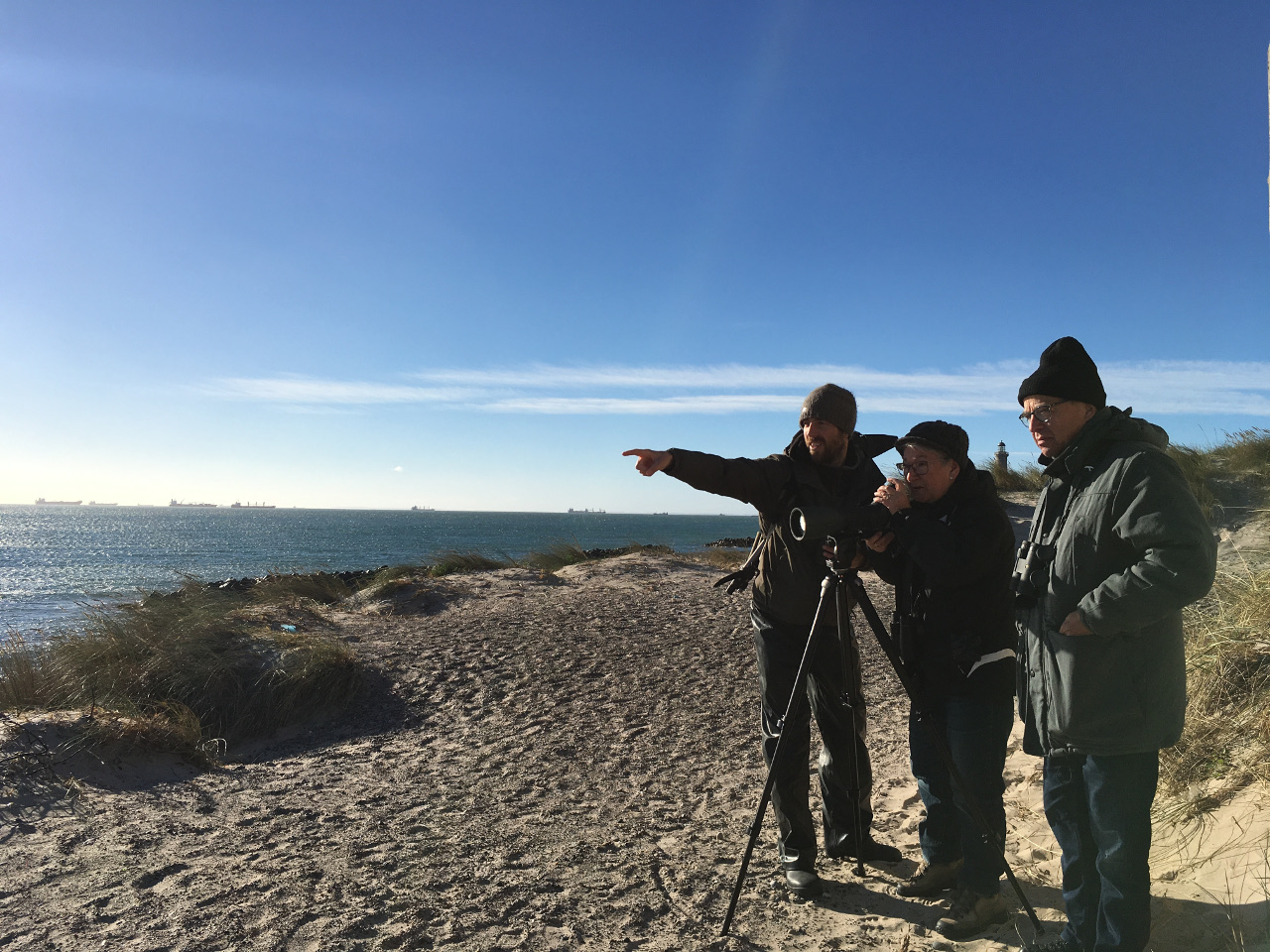 James, Helga and Kristian looking at the ringed Knot (Islandsk Ryle) on the beach outside the lighthouse.

Up at the tip, we had a flock of 38 Snow Bunting (Snespurv) which was wonderful as Helga and Kristian had not seen them since being here and the birds came incredibly close to us. We saw a  total of 14 species were seen on our walk.

In the afternoon, James and I had an interview with Simon to talk about our experiences at the observatory and after a feast of tuna pasta and apple crumble, followed a couple of rounds of Shuffleball with Helga and Kristian, it was time for an early night before our last day tomorrow.

With a lull in the winds today, expectations were high for seawatching this morning. Often after strong westerlies, seabirds that have been blown into the Kattegat can then be seen passing Grenen on their way back out into the North Sea. Sarah and I joined Knud at World’s End 3 for dawn, and he soon picked up the first Little Auk (Søkonge) of the autumn. In the meantime the wind had dropped just enough for Simon to open the Lighthouse Garden nets for a couple of hours, giving Helga and Kristian another chance to watch some ringing.

As it was our last day with Simon, we all went out for lunch and a beer at the Skagen Bryghus, where we ate some delicious fish dishes and sampled some great ales. 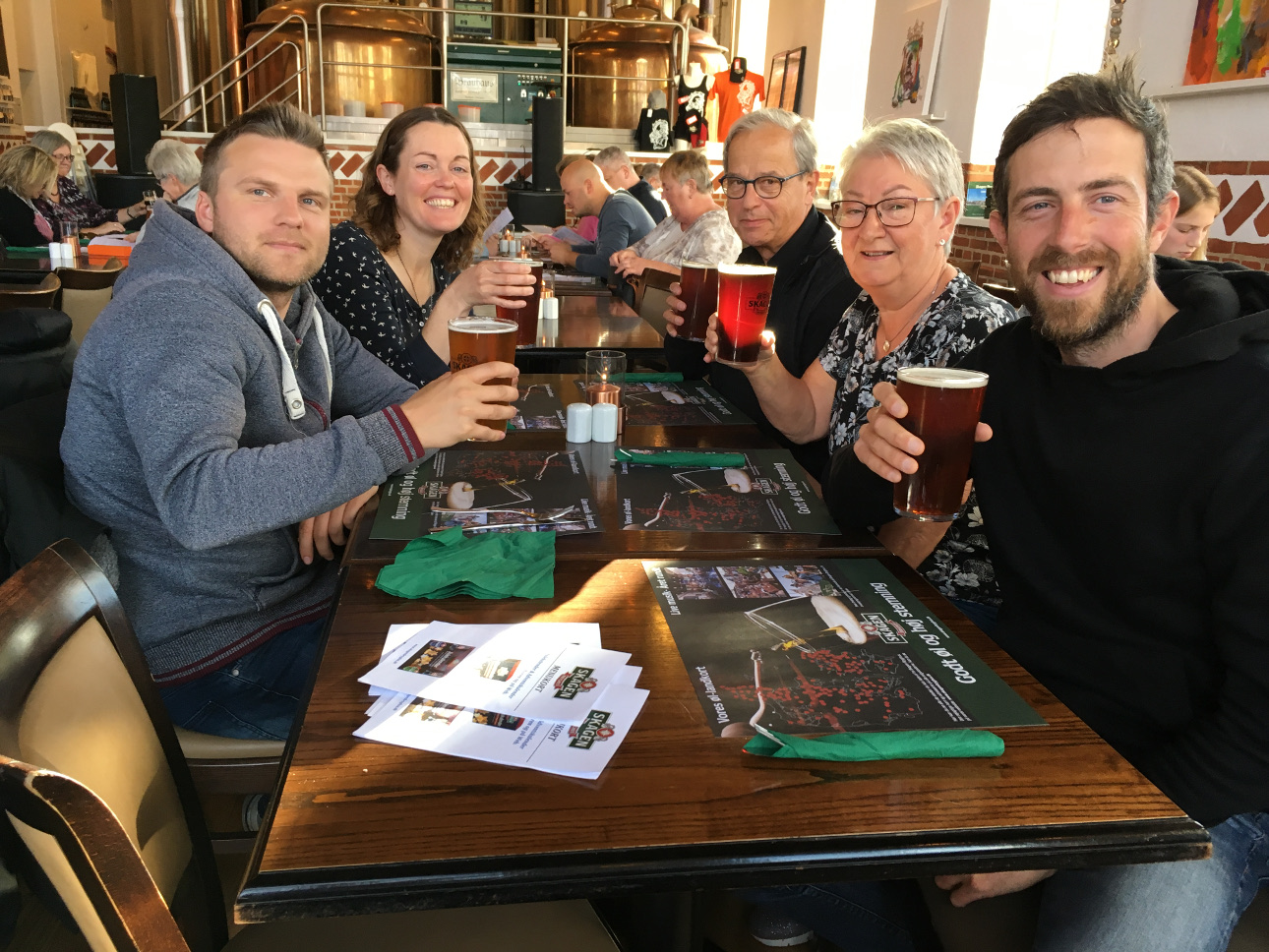 This evening we went out for the final night catching opportunity for Sarah and I. Simon came with us and we decided to target the Purple Sandpipers (Sortgrå Ryle) which have been roosting along the sea defences by the Lighthouse. 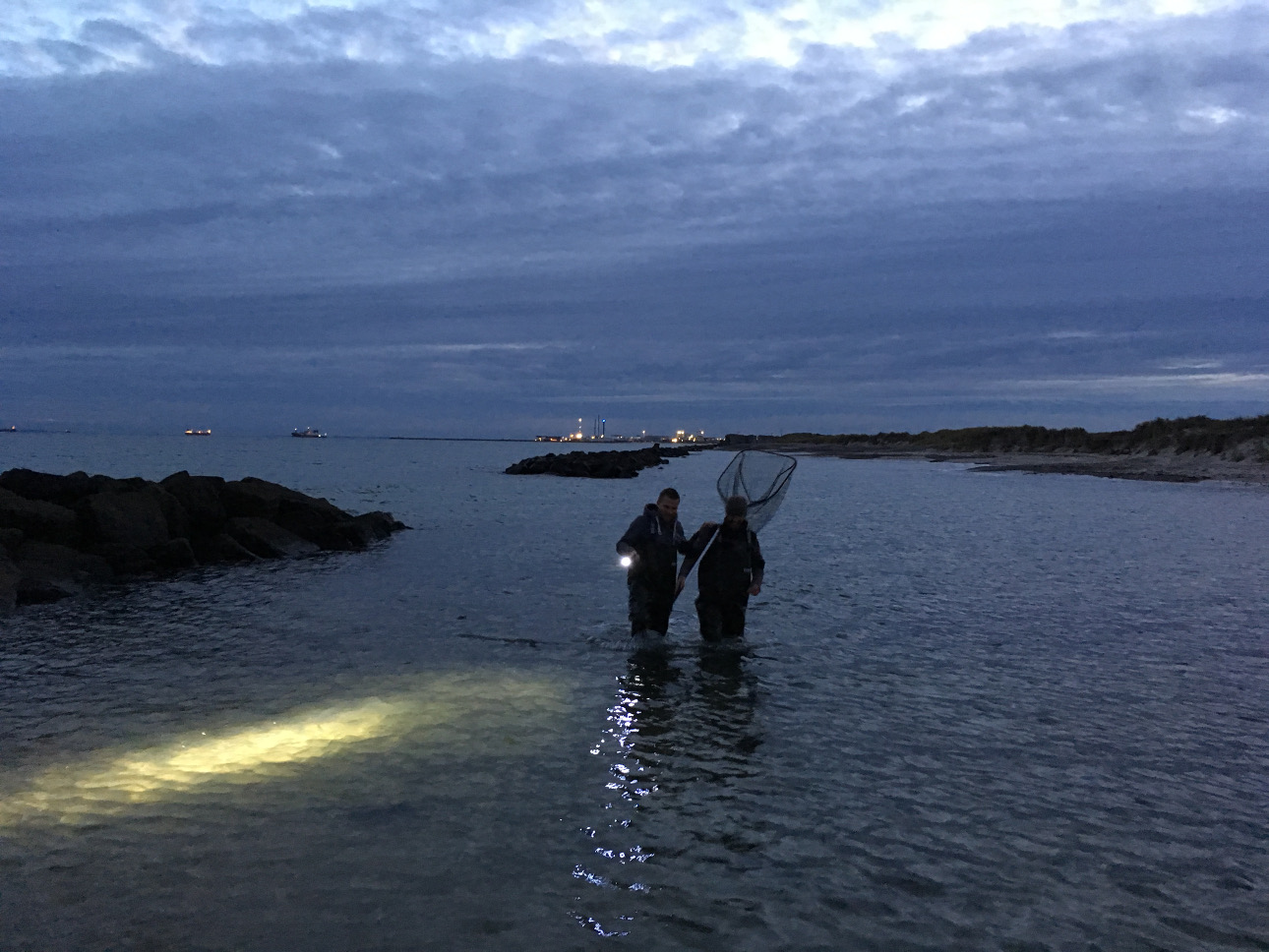 We didn’t get lucky with the Purple Sandpipers, but we did manage to net a Knot (Islandsk Ryle)! This time instead of waiting for pitch dark, we went just as dusk was falling, and it worked well as we were able to see and therefore approach the birds much more carefully. After many nights spent unsuccessfully chasing flighty Sanderling (Sandløber), it was great to end our stay with a successful catch. 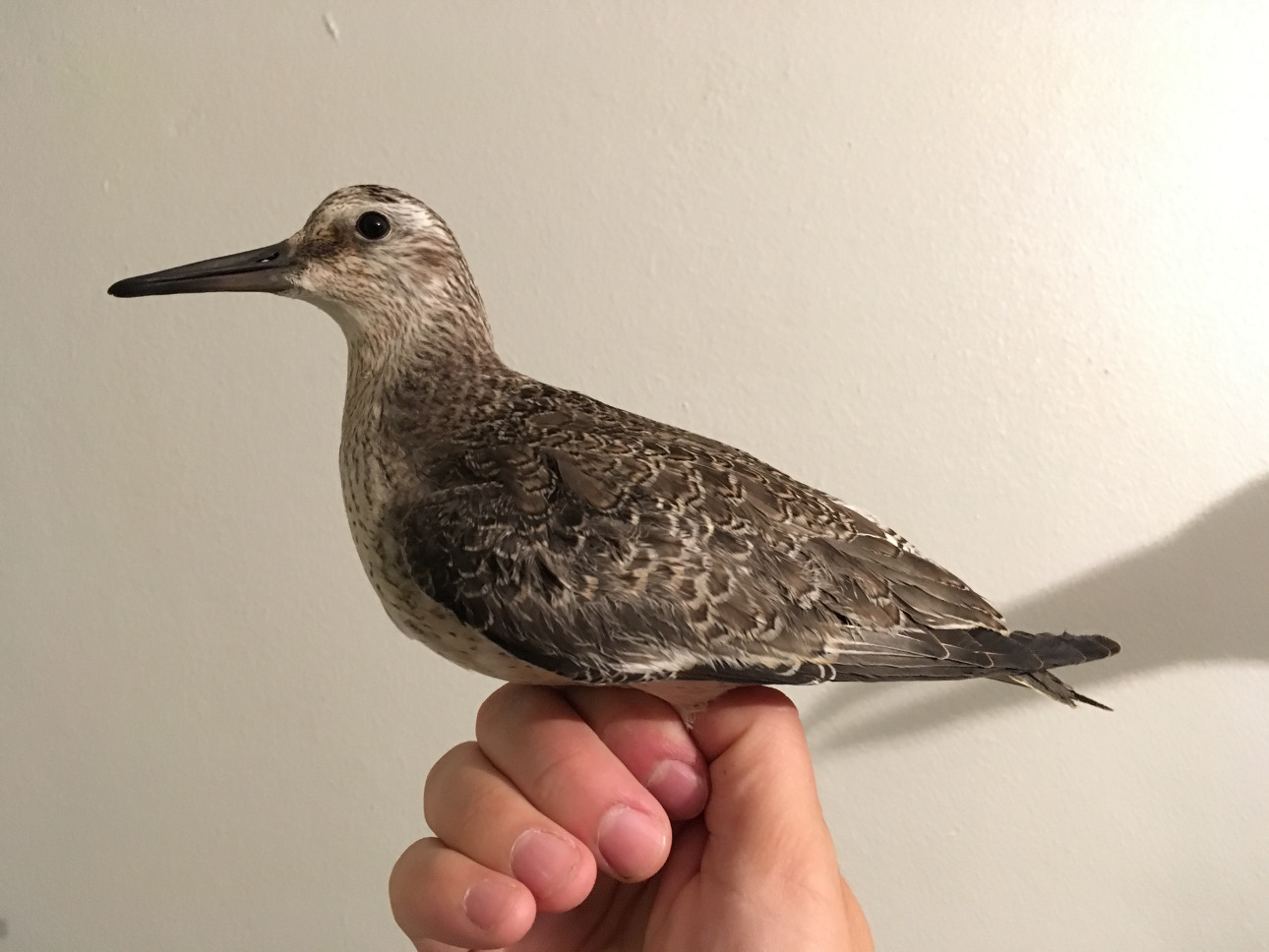 For dinner, Simon made some delicious (and enormous!) calzones, which we followed up with a movie night by watching The Big Year – fast becoming the Observatory’s signature film it seems!

Tuesday dawned windy and bright as expected. The wind was so strong that there was definitely no chance of ringing so James and I set out on a long observation walk - through Skagen reserve, out to Vest Fyr (West Lighthouse) and along Nordstrand (North Beach). Not a lot of passerines were brave enough to show their faces in this weather but we did see a Woodcock (Skovsneppe) the first of the season, along the path in the reserve. There were plenty of Fieldfare (Sjagger) and Redwing (Vindrossel) about too.

Sea birds on the other hand are certainly not afraid of the wind, and there were lots of things on the move out on a wild, rolling ocean. An hour's sea watching saw us count 340 migrating Common Scoter (Sortand), 125 migrating Razorbills (Alk) Velvet Scoter (Flojlsand), Fulmar (Mallemuk), Black Guillemot (Tejst), Great Skua (Storkjove) Kittiwake (Ride) and of course plenty of Gannets (Sule). A Leach's Storm Petrel (Stor Stormsvale) and Great Northern Diver (Islom) were also reported by other birdwatchers today. 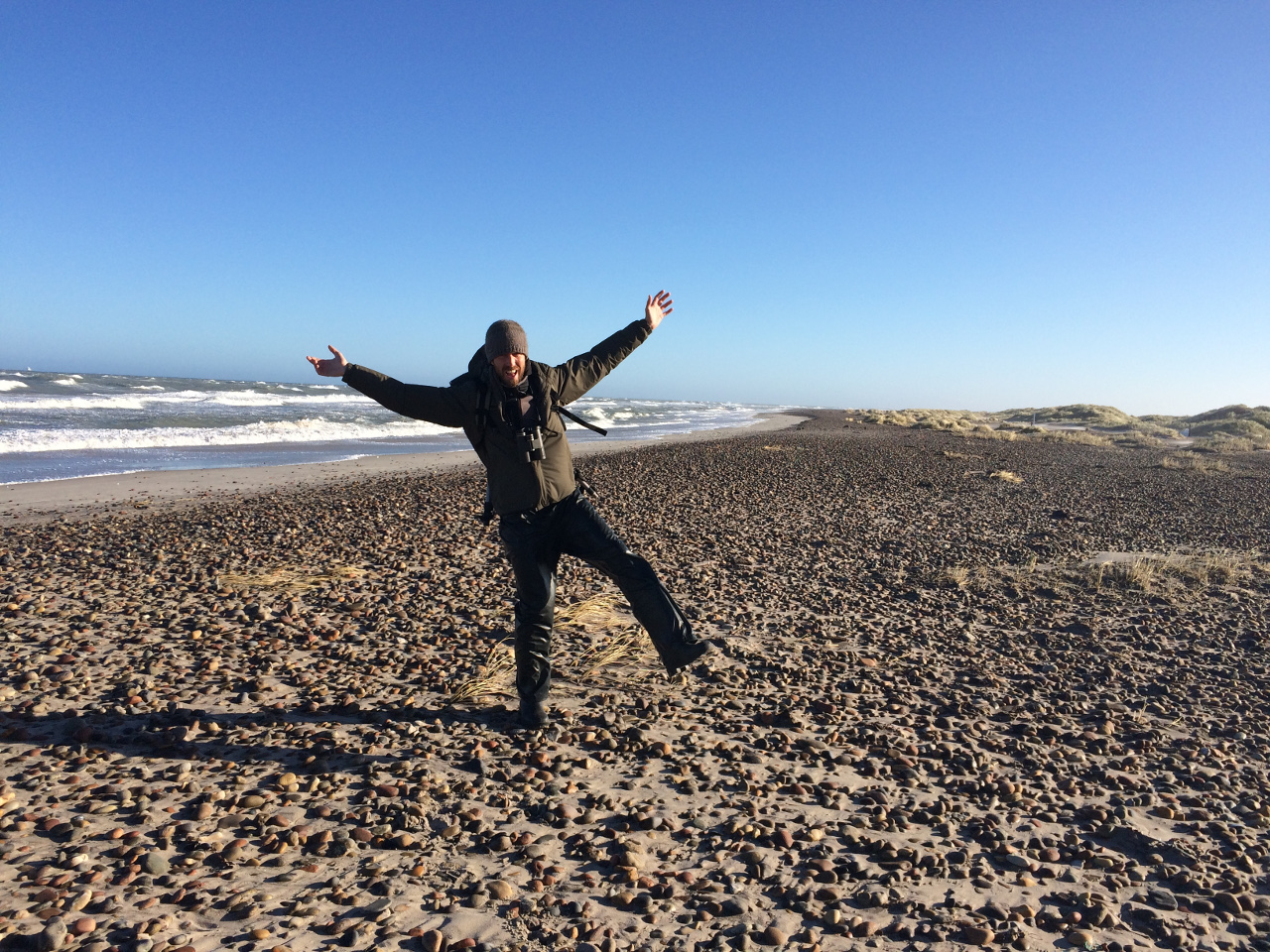 James being blown around on the beach at Nordstrand

Helga and Kristian took a walk around Elle Krattet, Nordstrand and along the Tractor Track to the tip. They saw a variety of passerines in the more sheltered areas, including Bearded Tit (Skaegmejse). After making us a delicious dinner of chicken meatballs and bulgur wheat salad, they joined us for a spot of night catching. Our sighting of woodcock earlier in the day had made Simon hungry to find one tonight. They typically like to feed on open grassy spaces, so we found ourselves running around local horse fields and football pitches in search of this enigmatic bird. A false alarm (tufts of brown grass) got the adrenaline pumping but ultimately, we came home empty handed. Hopefully Simon will have more luck later in the season when there are more to be found.

It's a kind of magic

This morning Simon began the day with a visit from 17 teaching assistants from University College Nordjylland. Gustav joined them for an introduction to the observatory and despite the wind, Simon also caught a few birds in the Lighthouse Garden nets to demonstrate how we ring birds.

Sarah and I were out observing with Knud again today, where the strong westerly wind had us searching for a sheltered spot in the dunes to try and keep warm and prevent ourselves from being buried under the flying sand! Our reward though was a strong easterly movement of seabirds, with the highlight being a Sooty Shearwater (Sodfarvet Skråpe) which Knud spotted within seconds of setting up his telescope. Other notable sightings were a Great Northern Diver (Islom), and 639 Razorbills (Alk) moving south east over four hours.

Helga and Kristian took a walk out to the tip this morning, seeing seals and a flock of Sanderling (Sandløber). This afternoon they joined Simon and Gustav on a successful mission to add Bearded Tit (Skægmejse) to Gustav’s list. Before he left this evening, Gustav joined us for dinner before treating us to the second impromptu magic show of the day. Although she had defeated him earlier in the day, this time even Sarah “Stone Face” Bedford succumbed to the magician’s gaze! Thanks Gustav – come back soon! 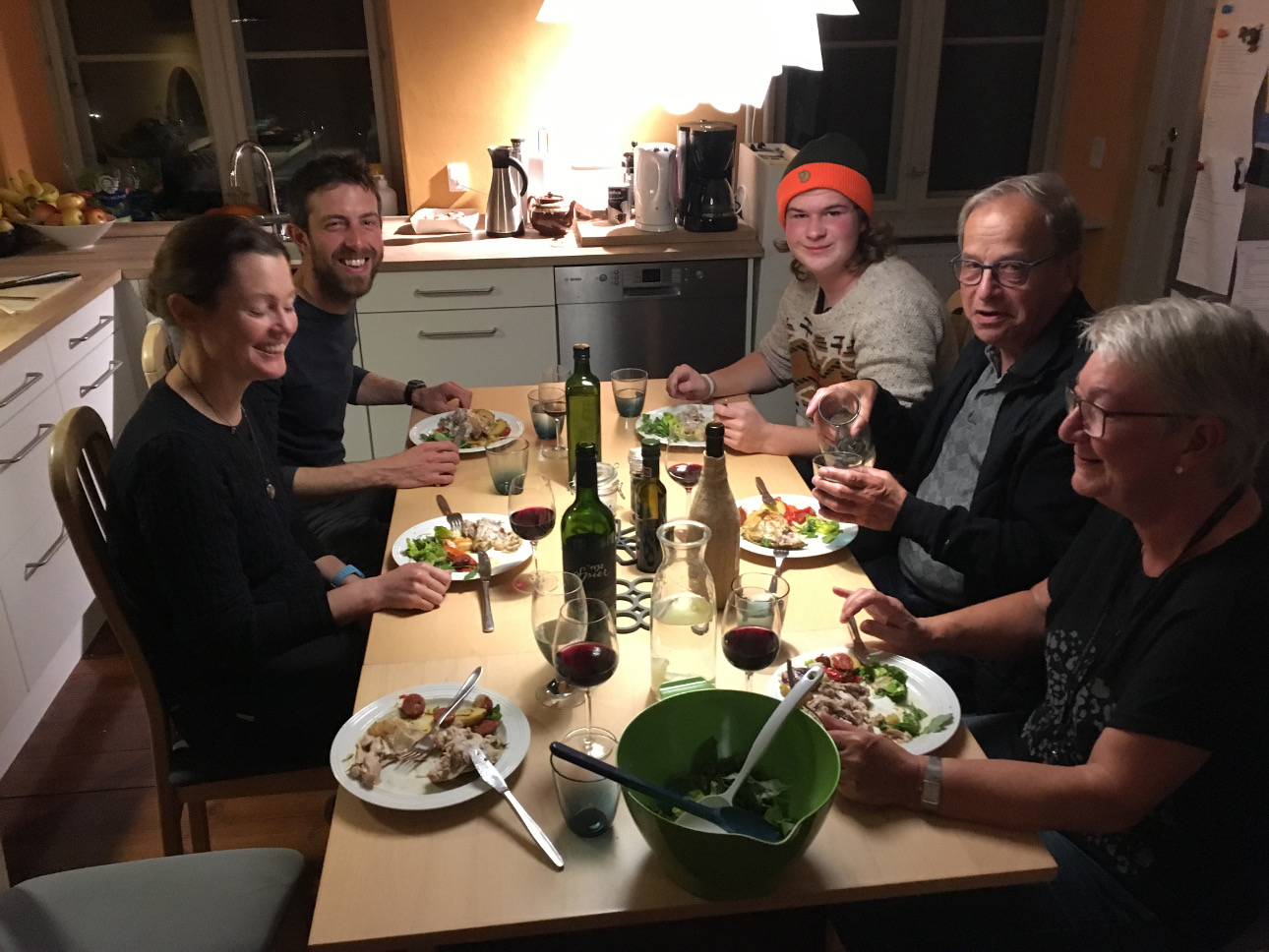 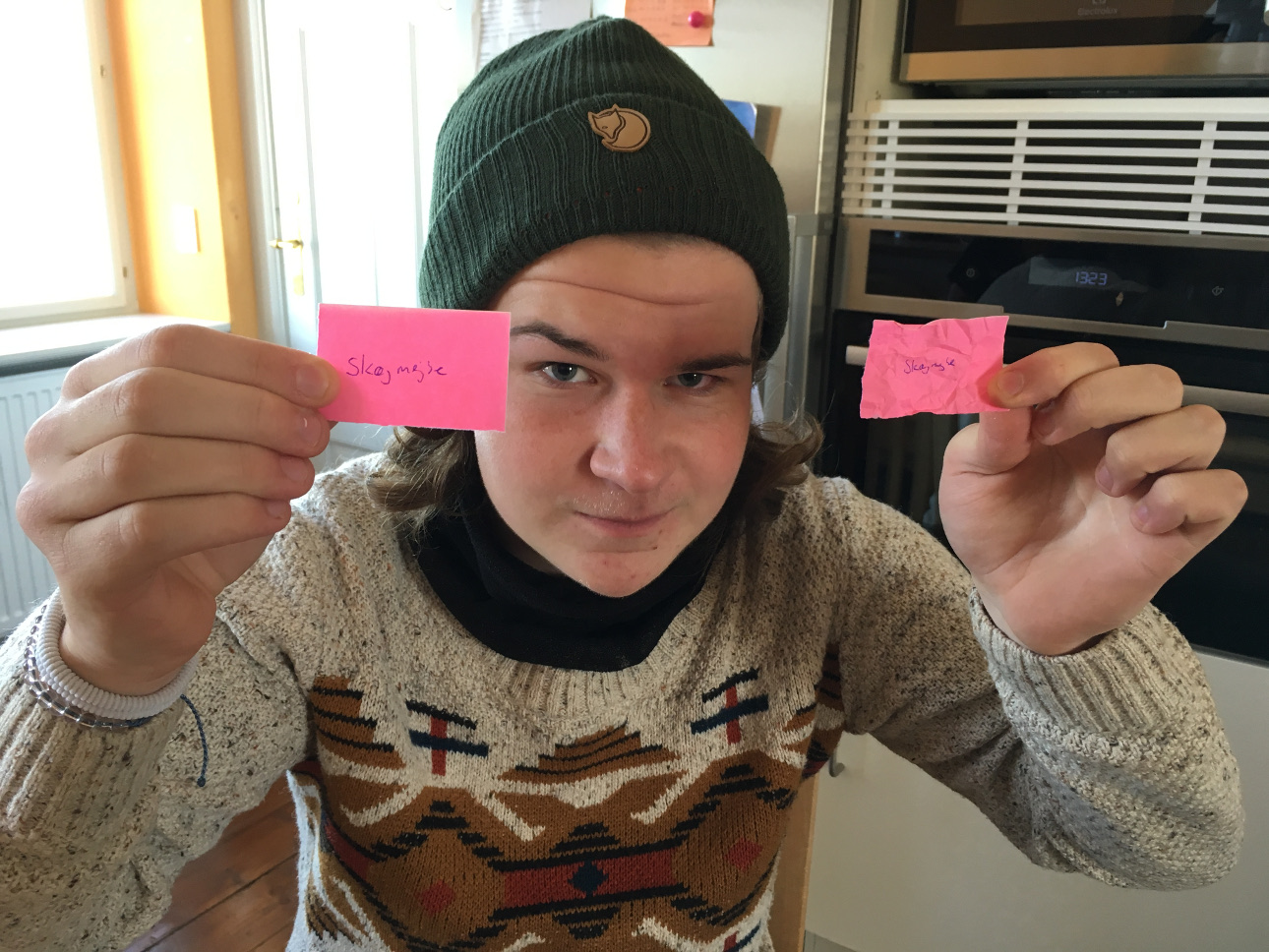 Look into my eyes: Gustav correctly guessing the Skægmejse I had thought of

With no ringers on site today, James and I agreed to meet Knud at World’s End 3 to do some sea observations.  It was a day of Gannets (Sule) and Razorbills (Alk) with large numbers of both. We observed more than 300 Gannets (Sule) resting and feeding where the waters meet in the Kattegat and more than 600 Razorbills (Alk) migrating south-east. Good numbers of Great Skua (Storkjove) , and divers (Løm) were seen and Knud also spotted a first year Caspian gull (Kaspisk Måge). 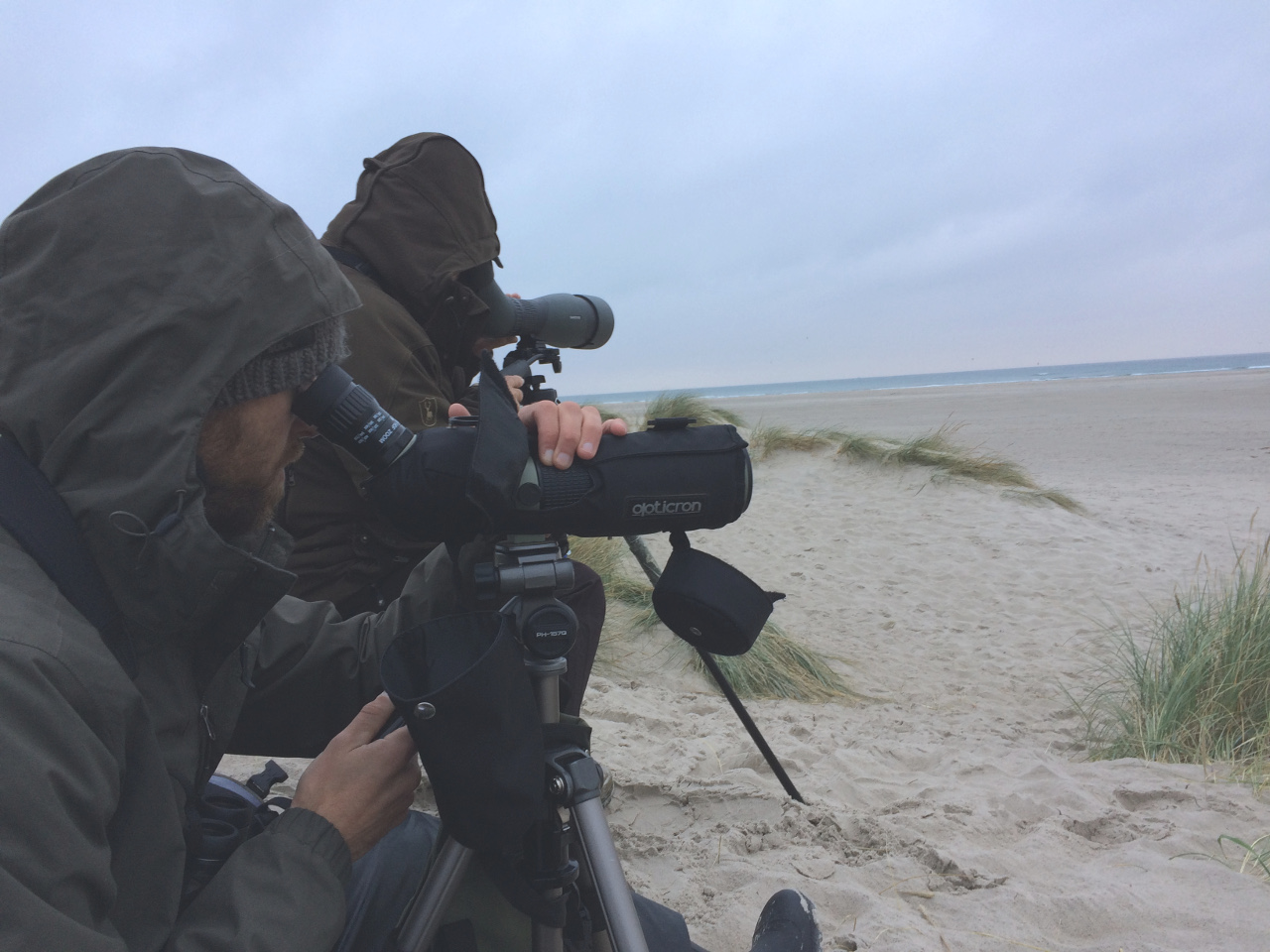 Part way through the morning we had the lovely sight of 7 Whooper Swans (Sangsvane) flying magestically towards us from the ocean. I love these swans and they are the first to arrive here at Skagen this autumn. A real treat to see. We saw four more on the way back to the lighthouse and others reported seeing larger groups this morning too. At the end of the morning, as the tourists started arriving at the tip, we spotted a man walking a Ferret (Ilder) on a lead across the beach! It’s strange what you see through your binoculars sometimes!

After lunch, Knud came to the observatory to help us a little with data entry in DOF Basen and as with all things administrative, everything ran much more smoothly when we added in coffee and cake! It’s important that we get the data entry part of our observations right and we are grateful to Knud for patiently showing us the correct way to put the work we have done into the database.

There were a few comings and goings today – Jesper left, having seen the Pacific Diver (Stille Havslom) he came for, and also adding a Yellow-Browed Warbler (Hvidbrynet Løvsanger) to his list too! Simon returned from Aalborg, with Gustav, a one-night visitor who is keen on birds and wants to learn more about ringing. He went straight out in the last of the daylight looking for Bearded Tits (Skægmejse) and Long Tailed Tits (Halemejse) – no luck today, but there’s always tomorrow. Helga and Kristian also arrived, they will be staying in the apartment for a week and enjoying all the autumn migration action that Grenen has to offer.

After dinner, James, Gustav, Helga and I went out to the beach in the hope of a successful night catch. The conditions were good for picking up birds with plenty of wind and rain but alas, the birds were smarter and faster than we were. The night-time adventure did provide some comedy for Helga and Gustav though, as James and I fruitlessly sprinted up and down the beach after a group of Sanderlings (Sandløber) we had seen earlier in the day! Perhaps we would have been a bit quicker if we hadn’t eaten all of that cake…