Today we are planning a tour guide with a primary school class, so we open the nets in the garden at 08:00 am.

We explain to children about our activities at the Bird Observatory and we try to make them aware of the impact of plastic pollution on birds and marine and terrestrial habitats.

Tonight we will go south of Skagen, to a place where many pairs of Nightjar are concentrated, to try to ring them.

So in the afternoon we prepare all the equipment we will need for the night, and afterwards we sleep for a few hours because we will have to stay up all night.

At 10:00 pm, Jørgen Kabel og Frede Jakobsen will arrive and accompany us kindly with their cars. We start from the observatory, and after about half an hour by car and ten minutes on foot we arrive on the spot.

We observe severals Nightjar in the area, they hope to catch some, but it is not easy.

A mistical morning at Verdens Ende

This morning in the field was really foggy and it was hard to spot any birds. But the mood was mystical and I used the time to draw a Lærkefalk. After nearly two months of watching and observing birds, my falcons finally don’t look like gulls anymore! While I drawed, the Rørdrummer boomed in the reeds and a Karmindompap let hear his tropical call. During a walk to the tip, I spotted a lot of Stor Præstekrave, sneaking secretly around the beach. I still wonder, where their chicks are and hope, we are just not smart enough to find them, and not, that they haven’t hatched any.

Joakim and Michele were ringing meanwhile, but we all had to get back to the obs early, because we had two guided tours with school classes. They were quite interest and it was a pleasure to educate the next generation about ringing and birds in general. Maybe one of them will work as a volunteer at the obs in the future?

The first weeks, when I came here, I was more interested in ringing and I learnt a lot about moult in this time. But since a few weeks, I’m more up to observing and migration counting. Even though the main migration time is already over, there is still a lot going on and it’s fascinating to watch it. The Sule, which were so common when I came, have nearly completely left, but there are so many Grønsisken and Stær these days! The high “tiluuuh” of the Grønsisken can be heard from far away and when you finally see them, it’s hard to count them, as they bounce around like rubber balls. Counting the Stær is a little more easy. But you have to watch closely, maybe there’s a Rosenstær in between them? And a few late guests are still around, like this Kvækerfinke, hanging around Grenen for a few days already. I wonder if he will still make it, to his final destination? And slowly the first autumn migrants arrive, like male eiders, who leave the breeding site earlier than the female.

And a short spoiler for tomorrow: We will be catching NATRAVN tomorrow night! So stay tuned, we will update you on Facebook!! 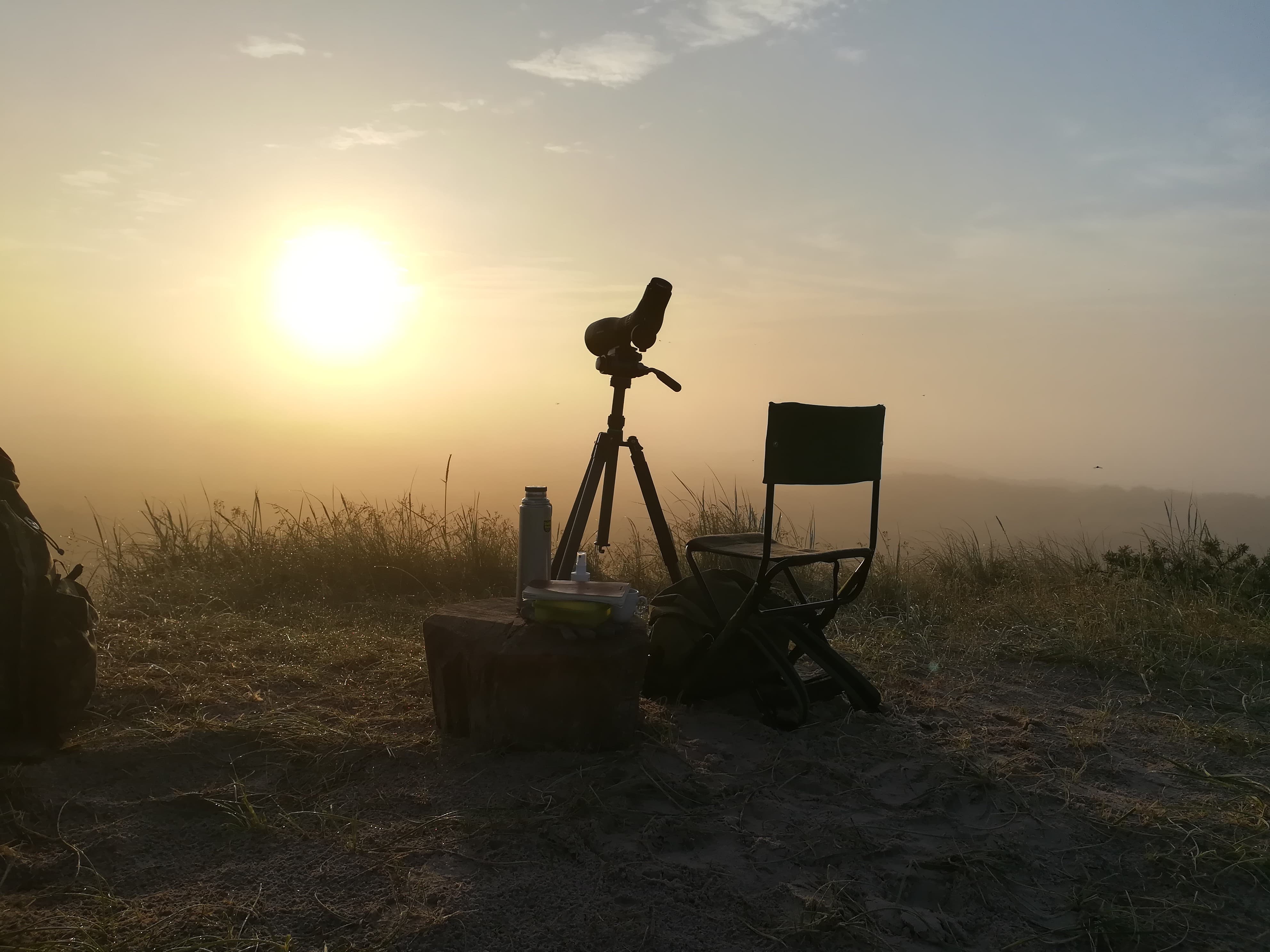 P.S.: I have only ten days left here at the obs :( Unbelievable how fast time flies! 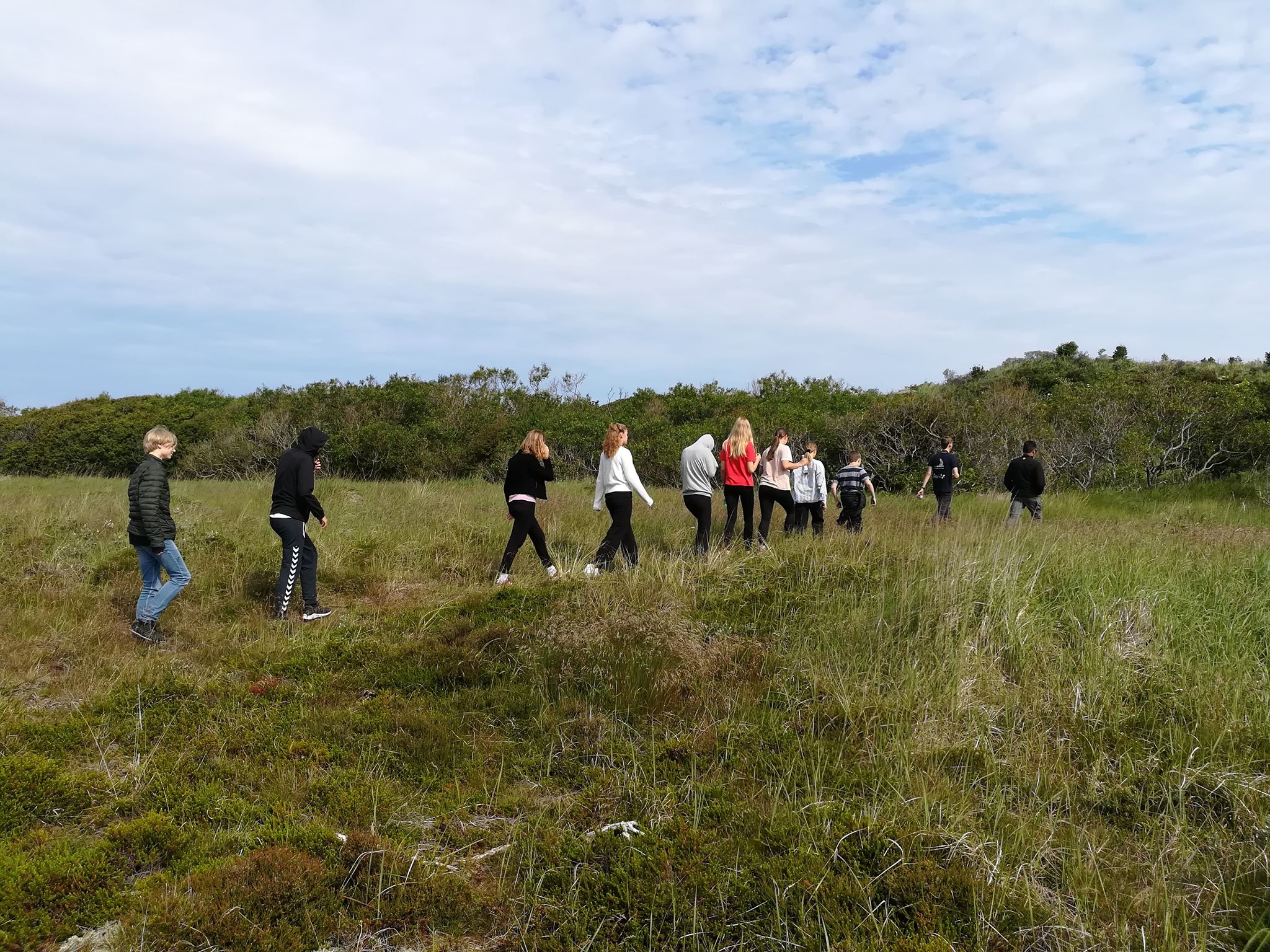 Today I woke up at 3:00 to go to ringing at Sardinkrattet.

At 4:00 all the nets were open, a day of good weather and little wind, I was confident that it would be a good day.

Marie also woke up early and went to Grenen for observations.

The morning was very good with a pleasant climate, several species ringed and many recaptures. 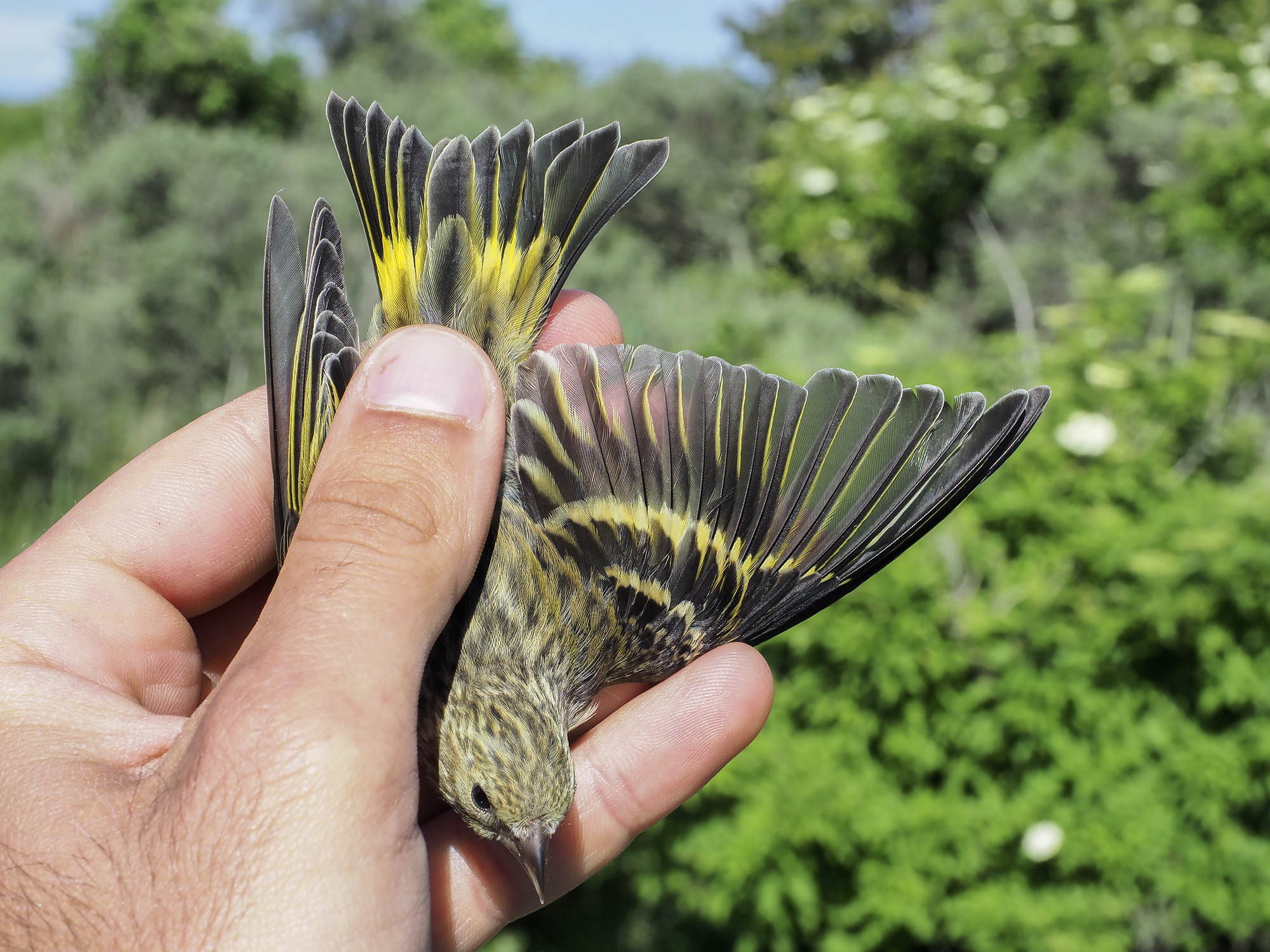 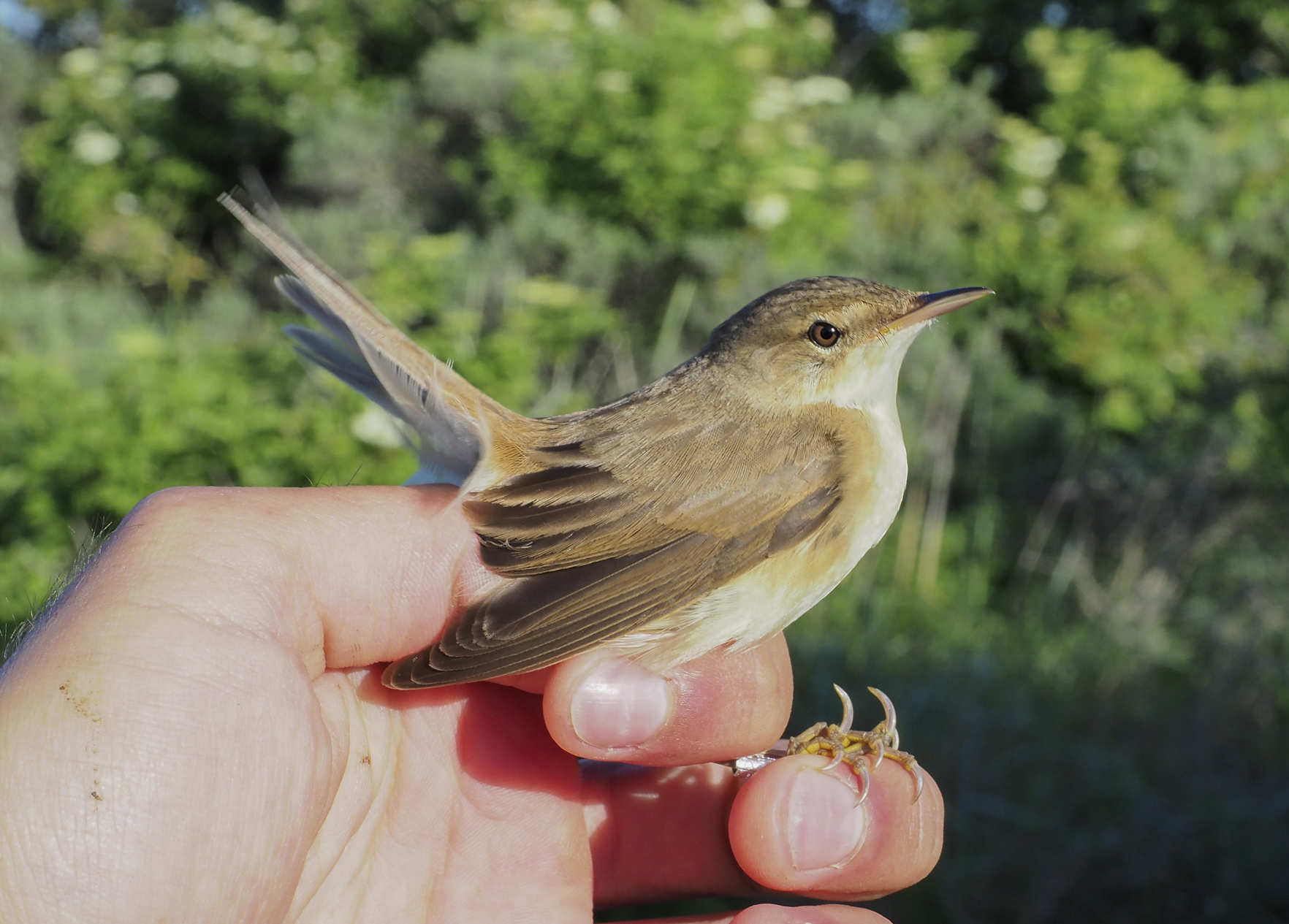 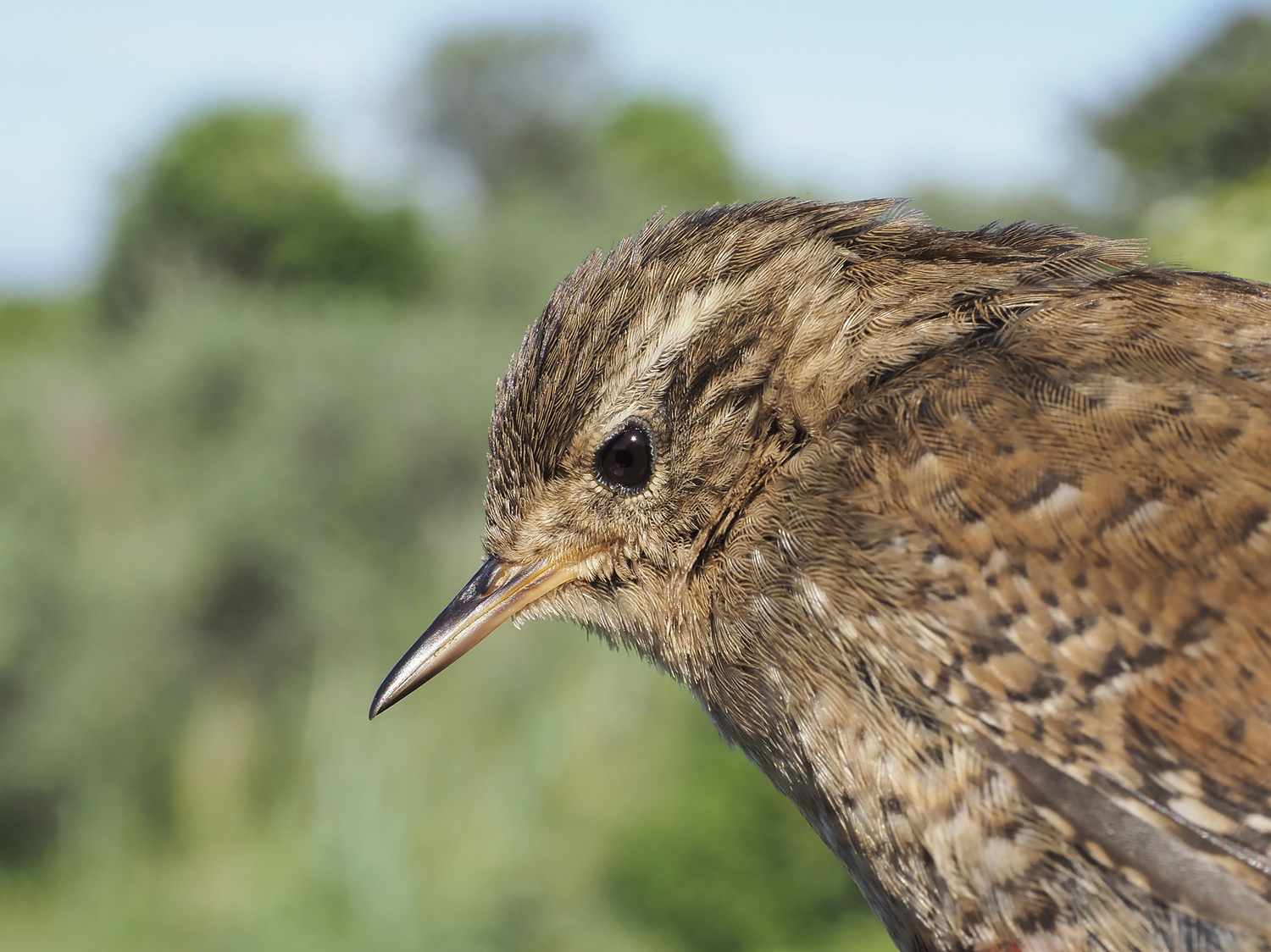 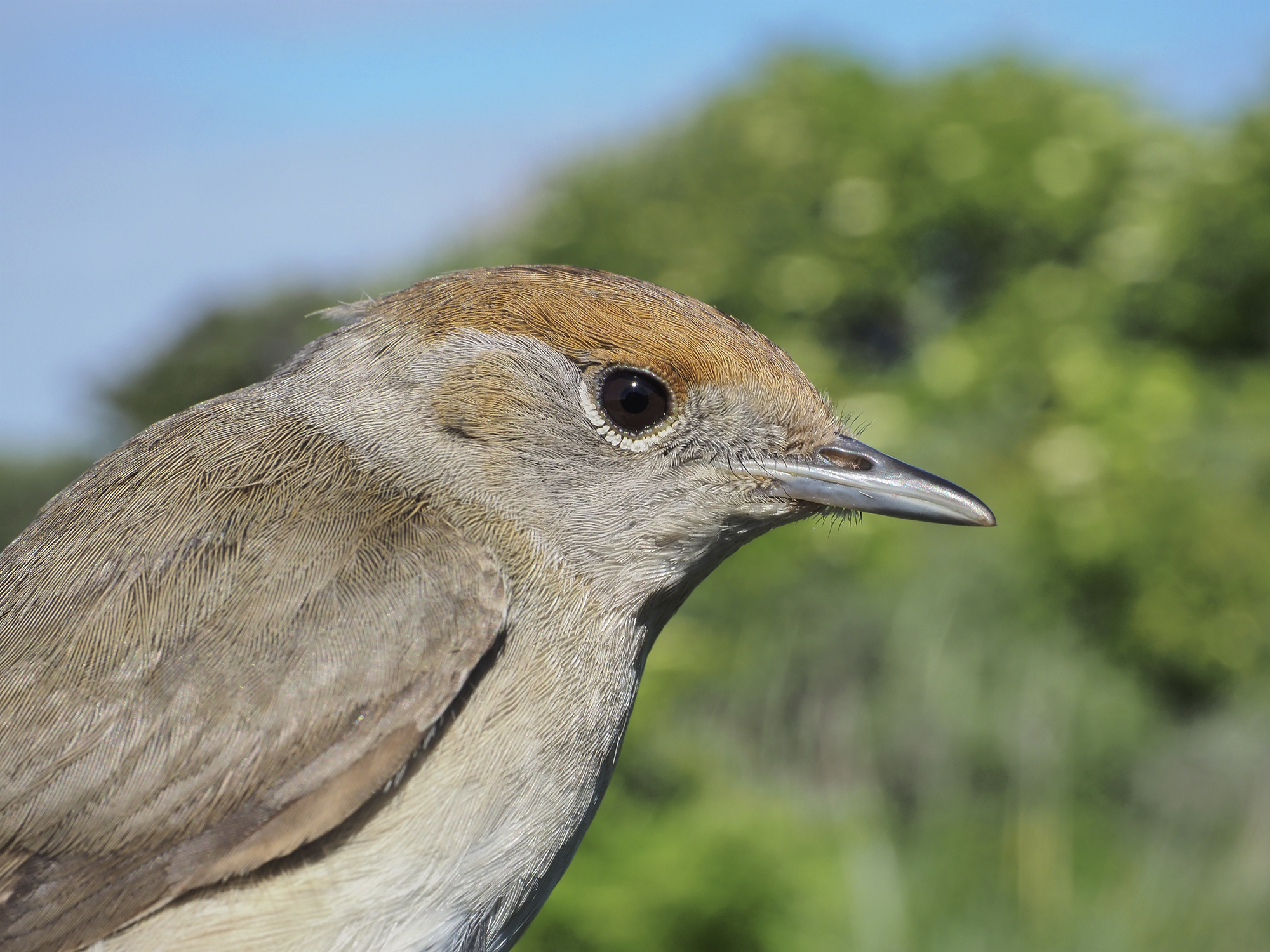 At 11:00 I closed the nets and returned to the observatory.

In the afternoon  Marianne arrived, she is a new guest for this week.

Marie welcomes the visitors, who now become more numerous as the season has begun.

I update today's data on the databases and after spending a dinner tonight.

Joakim returns tonight, who has been at home for a few days. We look forward to having dinner together.

Today started even earlier than usual, because we did CES-ringing at Jennes Sø. It was not so busy today, but we saw a nest of the Hvid vipstjert (White Wagtail) at the house where we ring! In order to not disturb the breeding bird, we moved our bikes further away and kept distance to nest. Looking forward seeing the young ones fledge! Our gusts, Kirsten og Erik Pedersen left us and Marianne arrived. She is a painter, so we are quite curious to see some of her drawings! 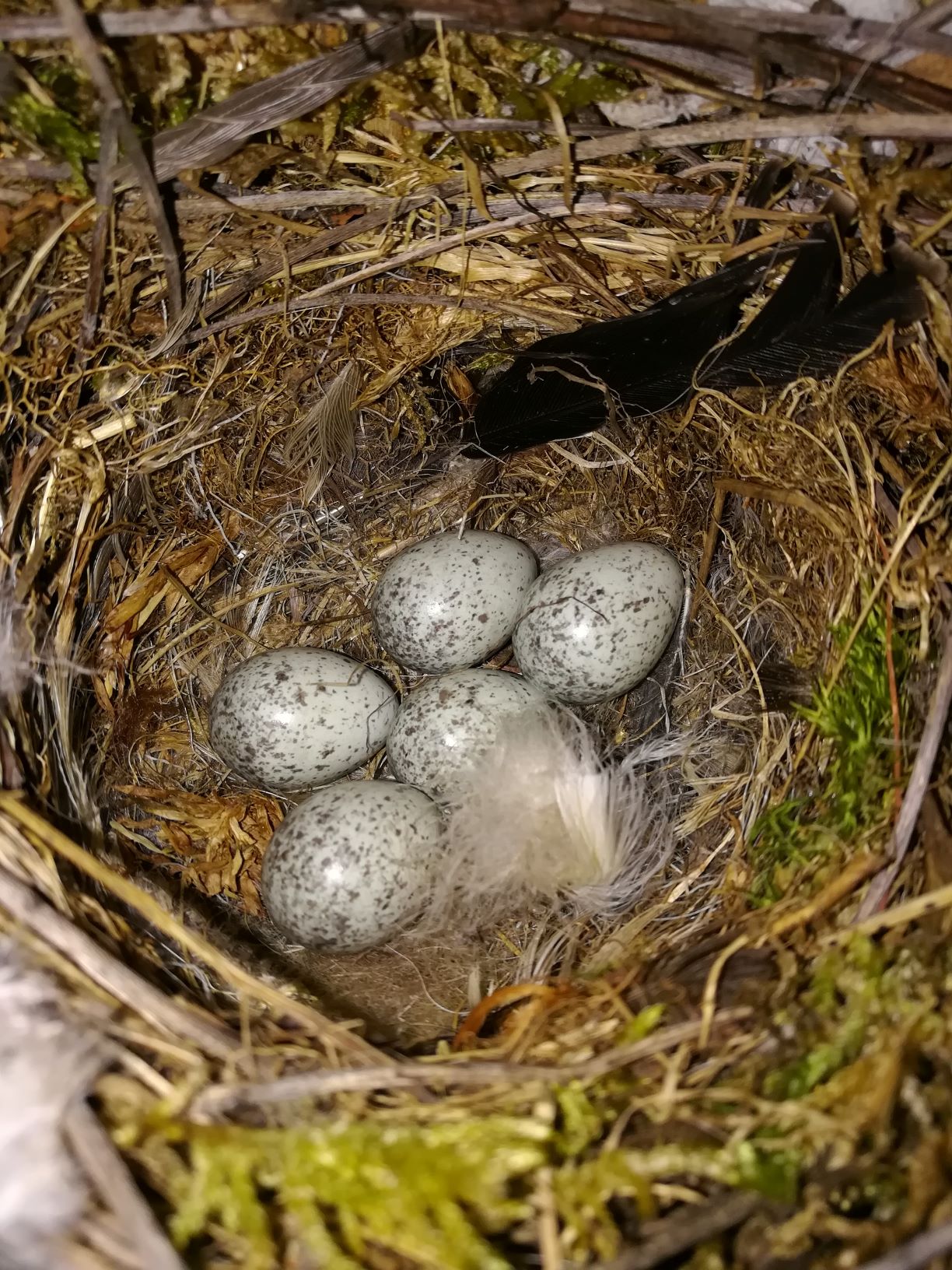 Today I got up very early to open the nets in Grenen.
Marie joined me later, after she accompanied Dante and Hebe to the station for a final farewell. They left early this morning, after more than three months in Skagen! We will miss them so much!

The morning during the first hours was sunny and windless in Grenen, most of the catches were in the first two hours, a lot of Blackaps today!
A little wind came up later, and at 9:30 we closed the nets. 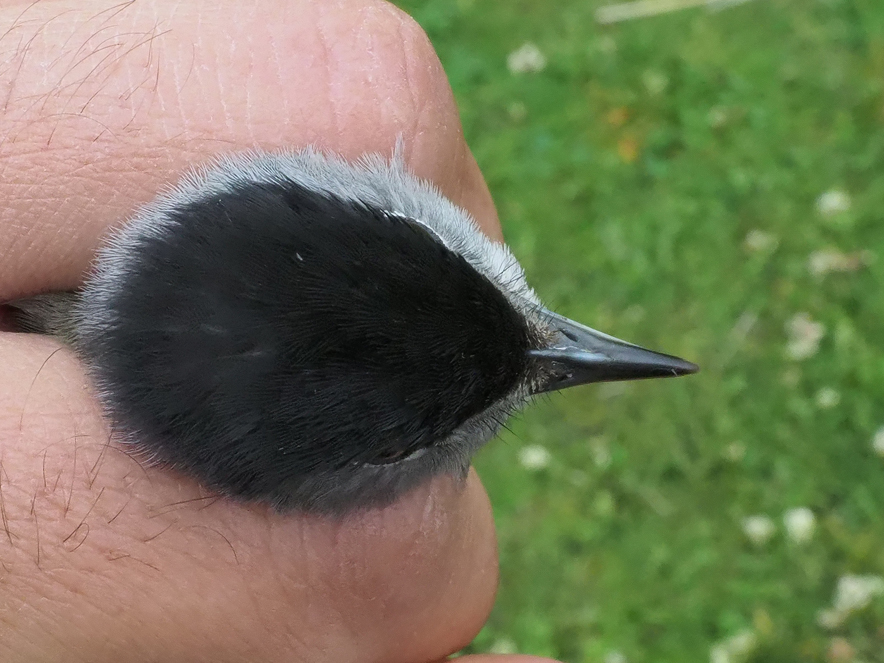 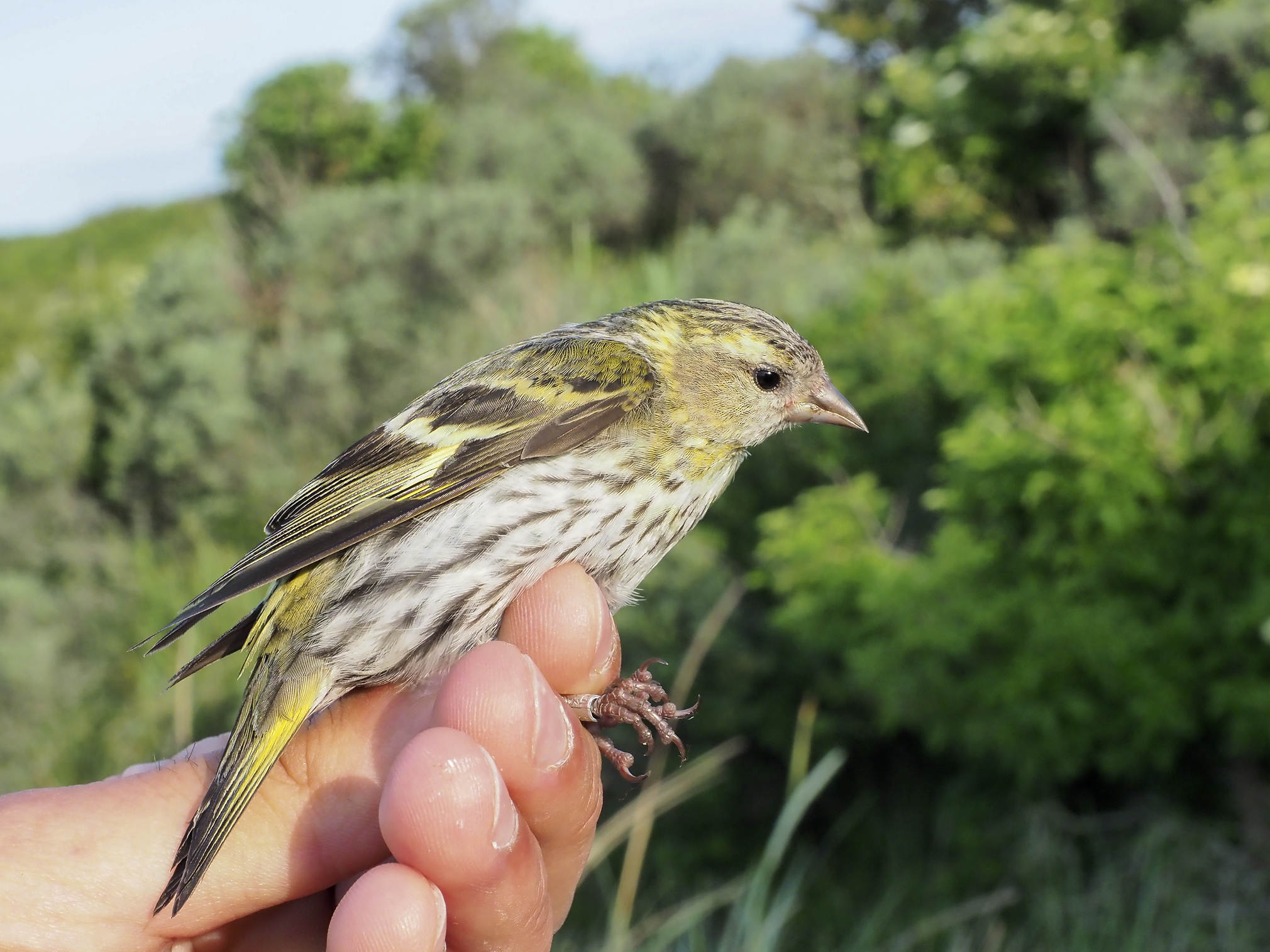 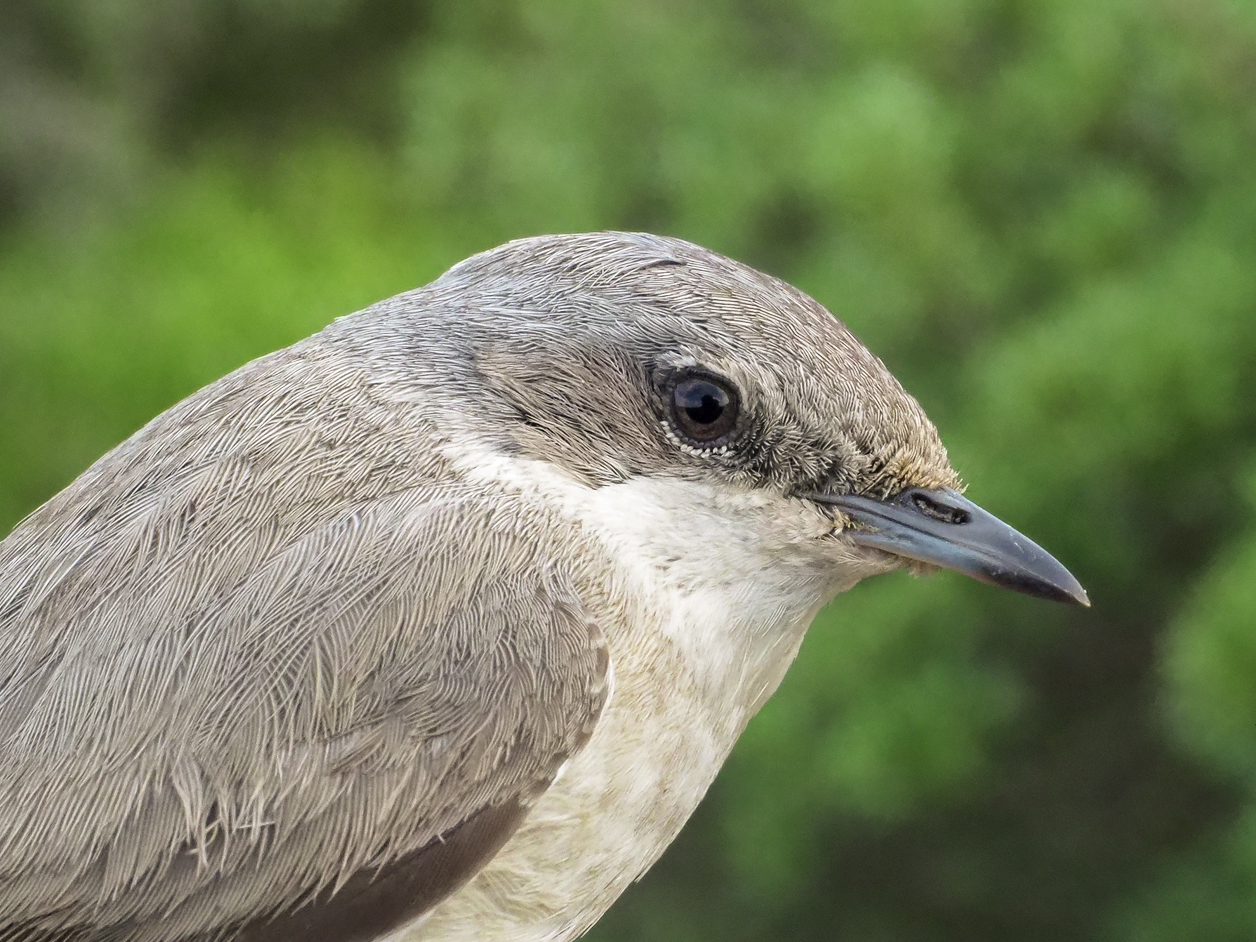 Back at the observatory during the morning we updated ringing data and observations.
In the afternoon we went to Jennes sø, to prepare the networks for tomorrow's standardized ringing session at CES.
Then I went to buy the ingredients to make a nice carbonara for dinner!
After dinner we agree for tomorrow and go to sleep soon, quite tired.

The last day of Hebe, Dante and Jonas

This day was though, as it was last day of Hebe, Dante and Jonas.

Michéle started the day early with ringing at Grenen and Jonas and me went out for diverse observations to Ellekrattet and Grenen. Hebe also went out, to say goodbye to Rolf and to give him a small goodbye present.

After we came back, we got a call by Hebe, who was meanwhile at the ringing site: They caught a Vandrikse!!!!! Dante, Jonas and I hurried to the ringing site as fast as possible. It was amazing to see this, normally very hard to spot bird so close! Maybe this was the goodbye present of Grenen for the three. 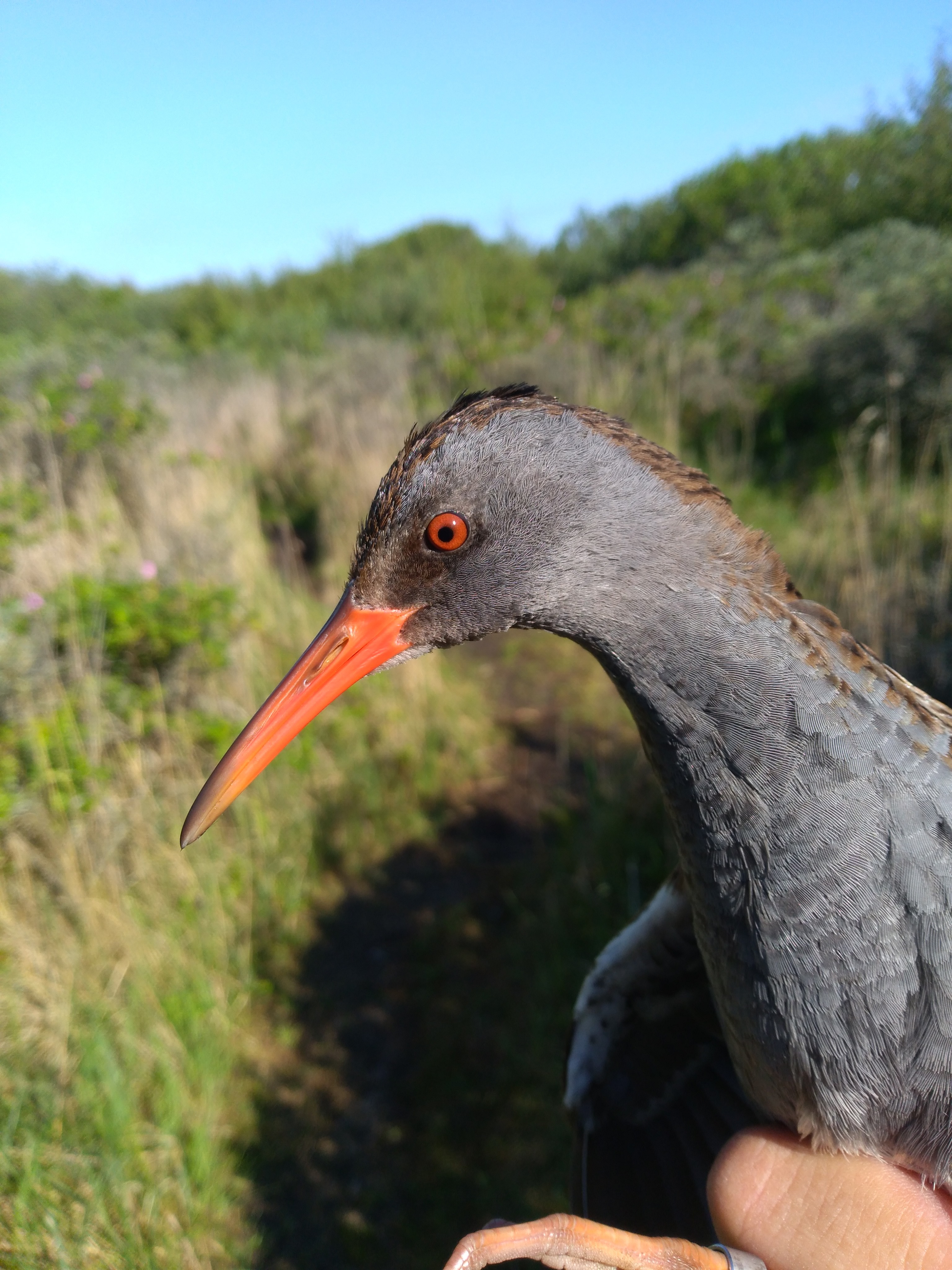 Afterwards Dante went to say goodbye to Rolf and the rest of us went back to the station. Jonas left around midday, he got a lift by the Kirsten and Erik to the train station, thanks for that! Although he was only here for one week, he already was a full member of the team and it felt, like he was here for much more than a week. Jonas, you should definitely come back!

Heebs and Dante also started packing during the day. It was so sad, to see them getting their stuff together. With every piece they packed, the apartment got emptier and emptier. Watching them packing, made their departure so much more real.

In the afternoon we went to town, to buy their train tickets for tomorrow morning and afterwards we went to Rolf for Dinner. Thanks for having us Rolf. Eating Pasta, playing Bird Bingo, watching the female champions League and playing guitar was a great last night. After we went back home, all of us wanted to go to bed early, to be fit for the next day. But we stayed awake until late at night to make the most of the time we had left together.

Letting those two amazing human beings go the next morning truly broke my heart. I can’t imagine the station without them. Guys, if you read this: We will miss you sooo much!!!! I really hope, we will see each other again, either in London, in the middle of nowhere in Scotland, somewhere close to Copenhagen, in Munich or here in Skagen, where it all began.  You two are some of the craziest and most amazing persons, I have ever met, and you will always have a special place in my memory. 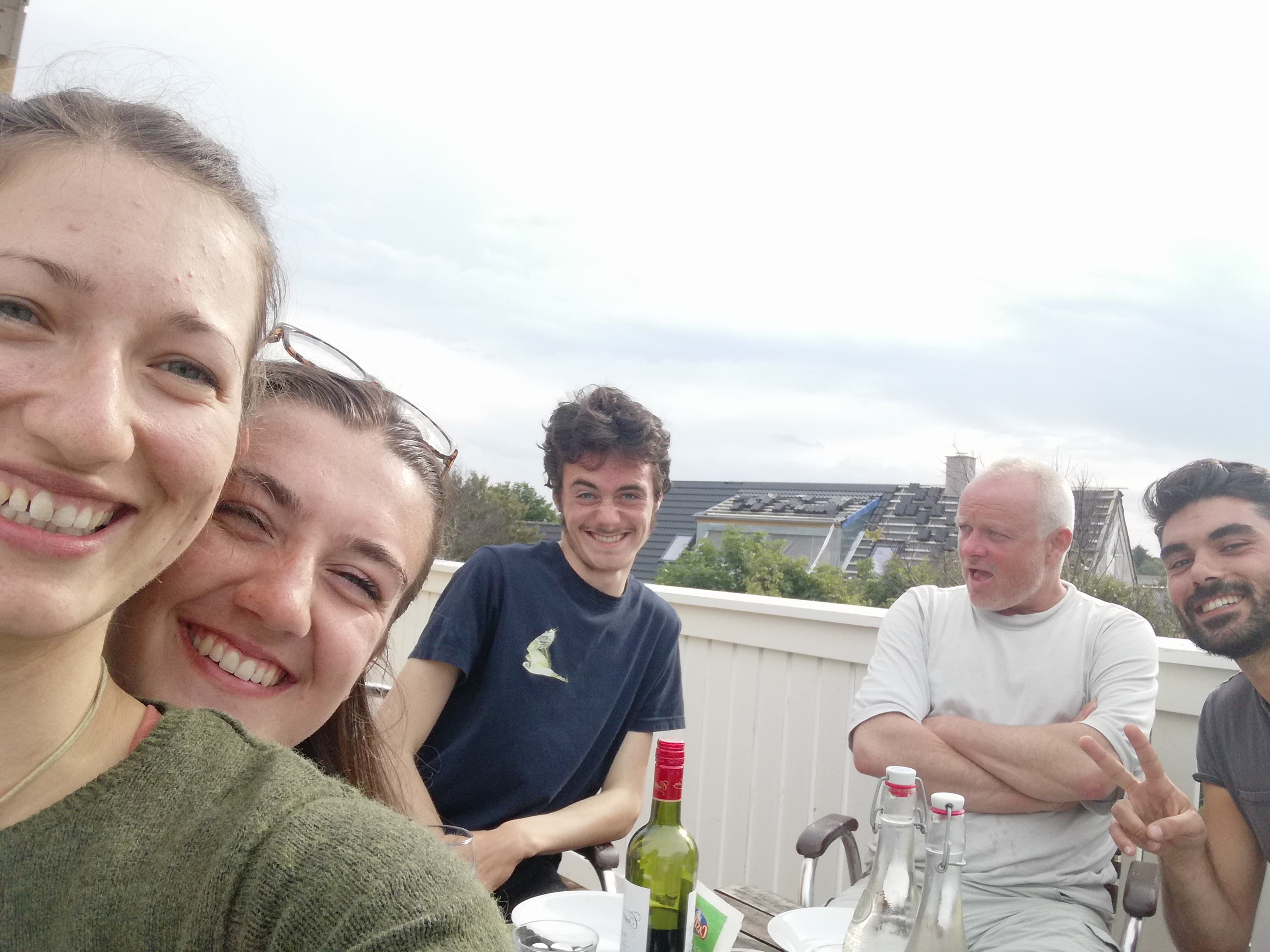 Today the weather is very bad, there is strong wind and it rains.

We take the opportunity to recover some hours of sleep in the morning.
Today is a cleaning day, in the late morning we arm ourselves with tools to clean and polish the whole house.
The afternoon pours, and it will continue to rain all evening.
Simon has a meeting with the other observatory managers during the afternoon.
Later for dinner, our guests Kirsten and Erik, prepared us a delicious roast meat meal.
Immediately after dinner we meet for the usual meeting, and plan the activities of the following days.
Tomorrow the weather will not be perfect, but it will stop raining and we could go out for observations, and ring in Grenen.

In the morning, Marie, Jonas and Dante headed out to Verdenes Ende. Soon after they arrived, they saw a Almindelig Skråpe! (Manx Sheartwater) It was quite distant.. but brilliant all the same. They later also saw a Spidsand. So though the weather was a little wobbly, it was a good morning.

Meanwhile, Michele, Joakim and I were in the ringing. Weather was not on our side and we had a quiet morning with two Tornsanger in the nets, and some snoozing,  though we hopefully watched some large flocks of Siskin passing over our heads!

Back at the observatory, we got on with some tasks for the day, and caught up on some sleep. Meanwhile, the guests headed out exploring and visited the art museum in Skagen.

I spent some of the afternoon then cooking dinner and after we ate, we spent a chill evening with lots of laughs reminising on the past few months. Quite a chilled and lovely day!! 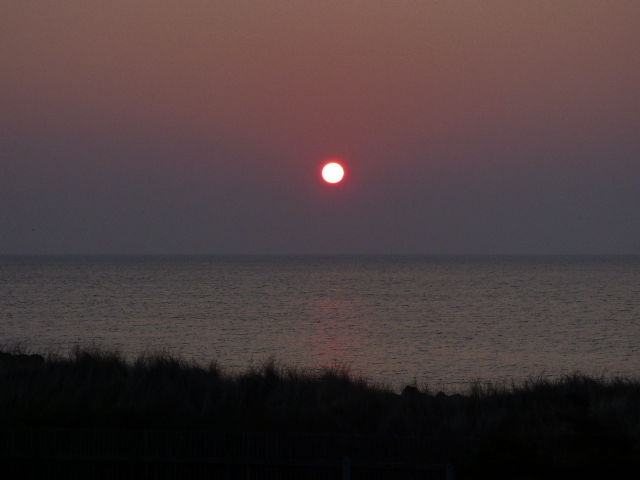 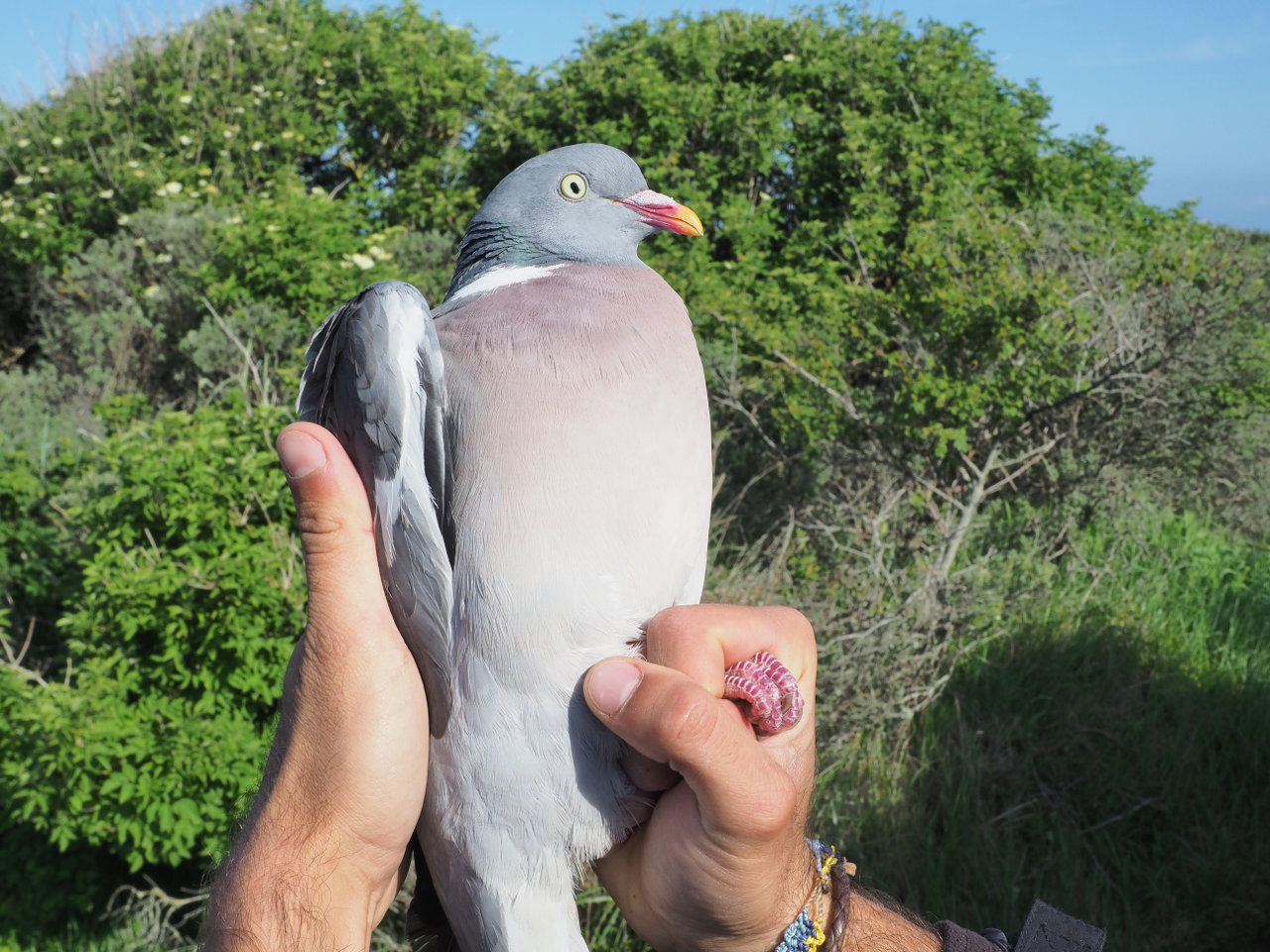