Today marks my third day in Skagen (still struggling with the Danish pronunciation), and my first time in Denmark! My name is Anna, I’m a Zoology graduate from England, and will be in the station for a month to help out with observing/ringing.

This morning was another early start for Dante, Joakim, Hebe and me as we headed up to Grenen. I’m still not used to this, or the bitter wind, so, while Dante and Rolf dissected the skies effortlessly, Hebe and I cradled our cups of coffee and hot water bottles. We counted around 300 red-throated divers, Scoters, Gannets and all manner of other seabirds.

To warm up, I wandered down to the beach to watch the Mergansers, Cormorants and Eiders rise and fall among the waves. A Tern flew overhead, occasionally diving into the freezing ocean, shaking itself off and continuing it’s aerial acrobatics. I watched the plovers and sanderlings survey the ocean, fluffed up against the wind. Avoiding the urge to attempt to cuddle one, I headed back up to the others, to hear that two bearded tits were hiding in the reeds below.

It was a pretty good morning, complete with a Great Skua, and a group of over 100 Common and Rough-legged Buzzards soaring on the thermals. Occasionally, a male Sparrowhawk would cut across the reedbeds, and the Bittern would boom his song, just to ensure we knew he was there- but would never see him.

Joakim left early to join Peter back at the house to carry out a ringing tour for the public. It was greatly successful, with many birds caught. Among the most exciting were a tree sparrow (below) and a goldcrest. Good job boys! 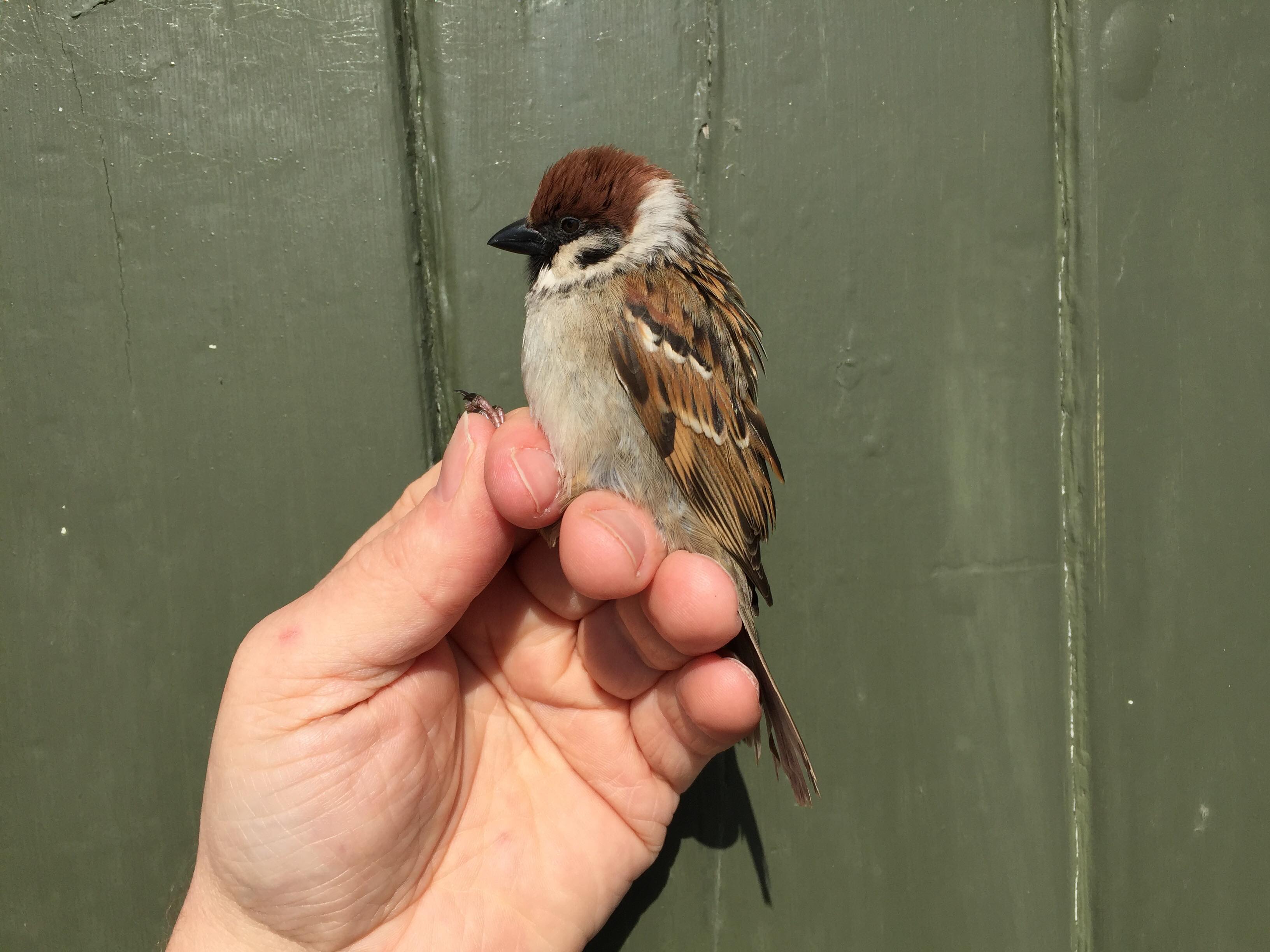 After lunch we all headed out to put up mist nets. After struggling with poles, getting caught in nets, testing waders and a fair amount of posing later, we headed home for much needed showers (Peter). 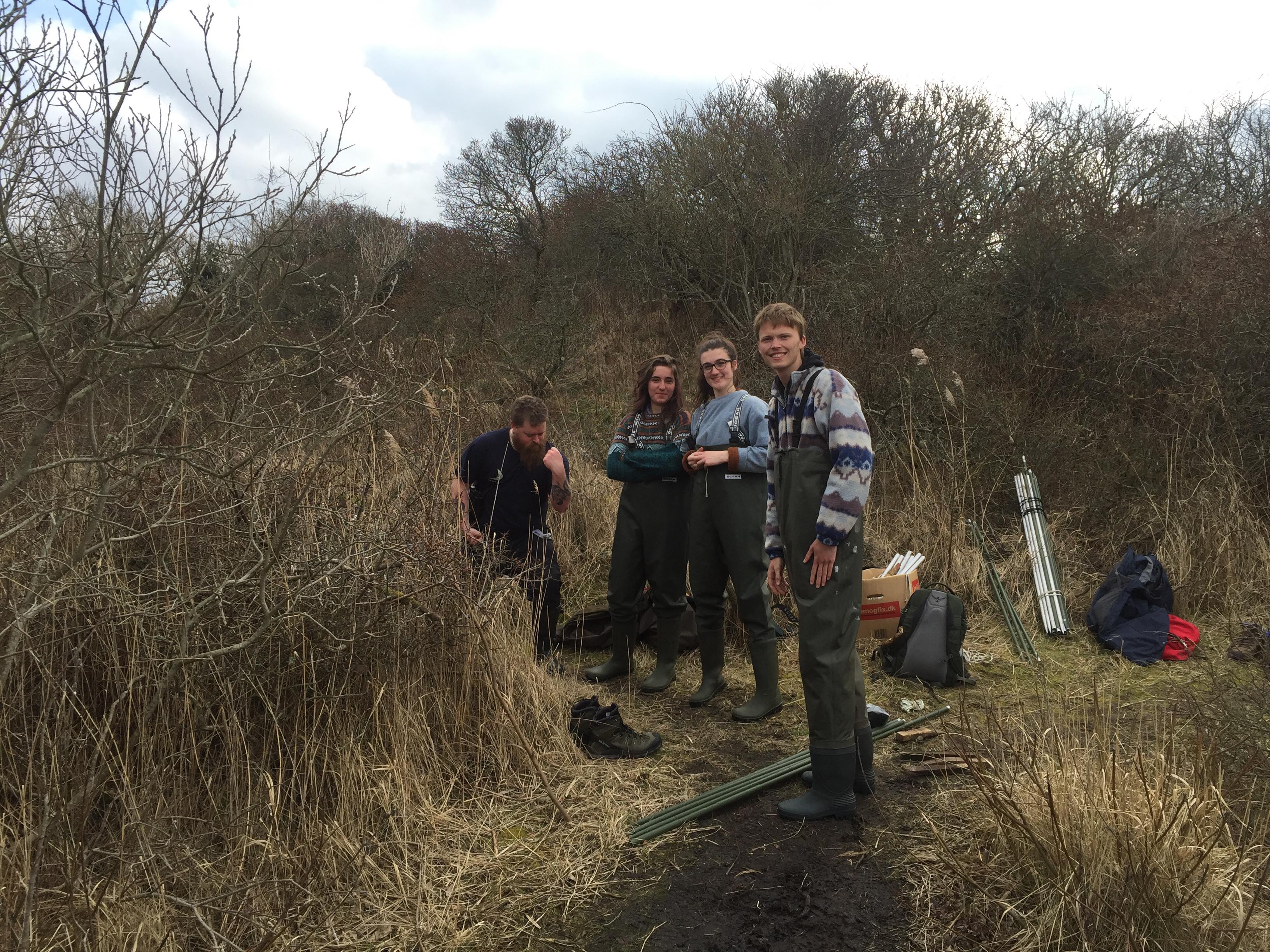 It didn’t take long for us to get itchy feet, so Dante and Joakim headed out in search of the Icelandic gull, with Hebe and I following (after fixing Hebe’s bike). Unfortunately, it seems Hebe and I share a lack of sense of direction. While lost in the harbour, we received a call that the boys had found aforementioned gull. What followed was a mad racing around the harbour to find them, and many wrong turnings. Of course, just as we arrived the Icelandic gull decided to disappear. Figures. It didn’t matter, we watched the others in the evening light, with the experts teaching us about aging gulls and their ridiculous 4ish years of immature plumage and the delicious scent of rotting fish setting the mood. We watched a Glaucous gull for a while, before heading home for the day.

We feasted on pitta breads, spilling half the filling over the table, prepared by our guests Ida and Hans. They even bought us wine! (Mainly for Hebe to get tipsy on). Sadly, this was their farewell dinner- to them, thank you so much for staying, we’ve loved having you here!

I rounded off the evening with a stroll to see the stars. They are truly incredible here, with Mars showing nicely. What an awesome place, with equally awesome (and crazy) inhabitants.

Today started like usual, with Dante and Hebe heading up to Grenen for some observations. Joakim and Anna needed a later start but they headed out a little later. I was out of the door a little time after that when a firecrest (toppet fuglekonge) was reported at Ellekrattet, a first for me in Denmark. We were joined by Ida and Hans.

After this Anna, Hebe and I headed into town with Ida and Hans to do some shopping for Hebe’s dinner night and to get some supplies. Whilst we were doing this Joakim was working on the diary and his personal post for the website and Dante was entering DOFBasen.

As the afternoon wore on Dante headed out to the harbour where an Iceland gull was reported. We all rushed down straight away (except poor Hebe who was still cooking), but after a windy and cold 40 minutes we had to give it up as a bad job. 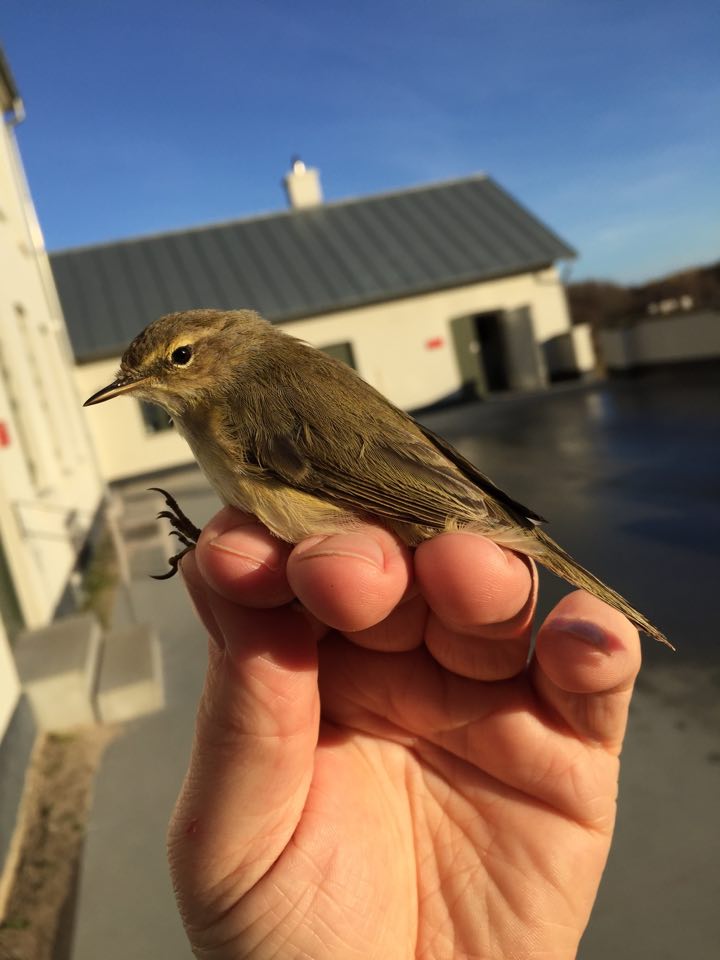 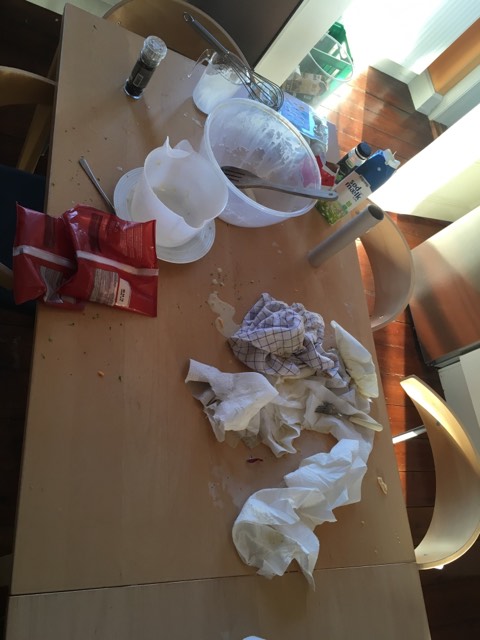 At Grenen in the morning Joakim and I saw a Puffin. Only the third in Denmark this year and a lifer for him! Hebe and Peter were ringing in the garden but didn’t catch very much, just a few Blue and Great Tits. Ida and Hans decided to go on a walk along the beach from the lighthouse to Nordstrand via Grenen and the Cormorant colony. Apparently the Cormorant colony is starting to smell like fresh coffee!

In the afternoon Peter, Hebe, Joakim and I went to Grenen to put some nets up. We got only 5 up but it took a while to get the hang of it and I’m sure we will be more efficient soon! After Joakims Swedish sausage dinner him and I nearly caught the Magpie in the garden again, so close! 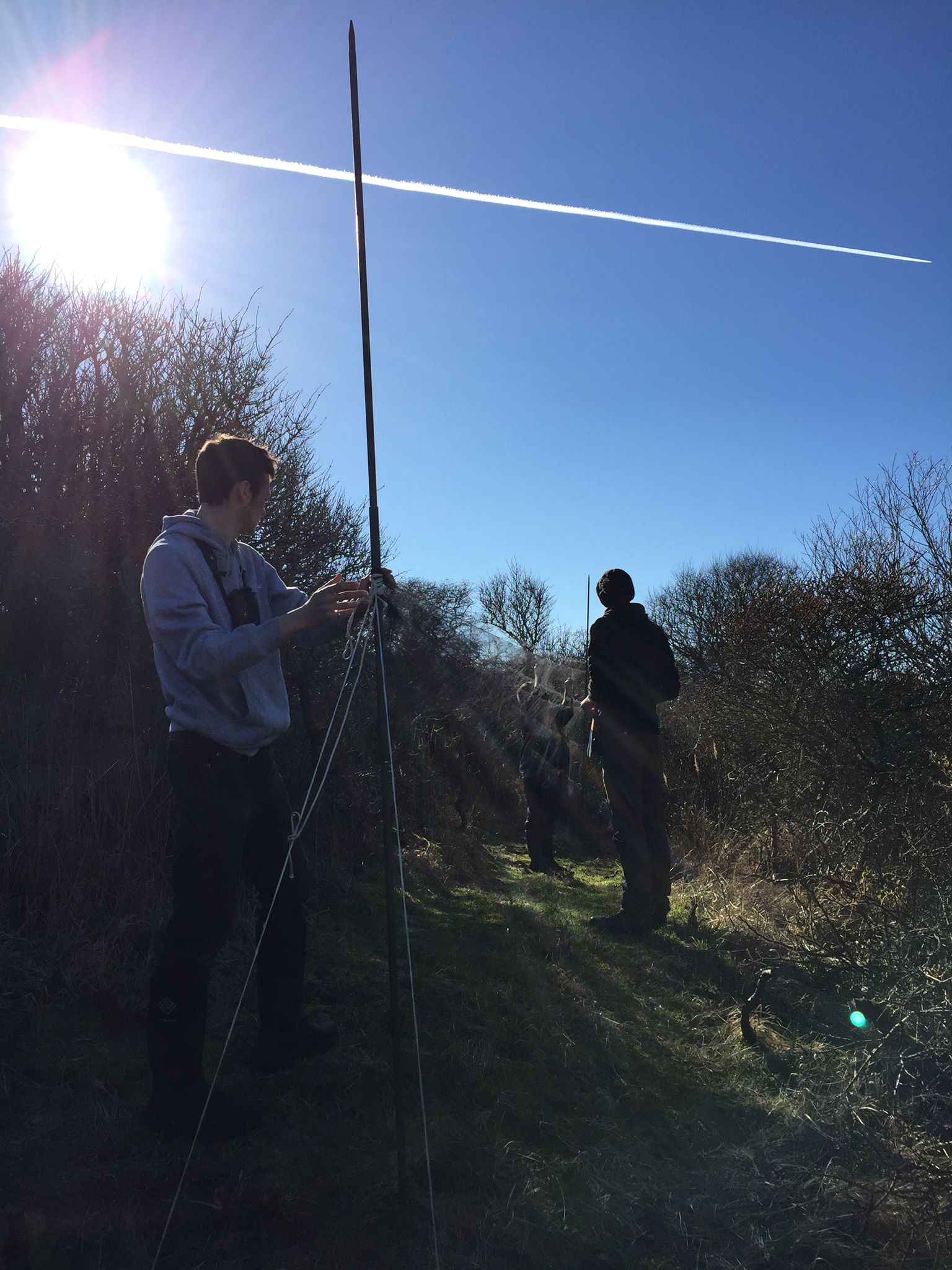 af Hebe Denny
An early start as always, Dante and I headed off to Grenen, him joining Rolf and Me joining Knud. We were joined for a while by Ida and Hans who brought lovely company and much excitement for the birds! It was good clear morning for observing, will lots of Lomvie, Sortand, Rødstrubet Lom etc and three Rød Glente and 14 Top Skarv!!

Joakim joined Christel, Flemming and Lene for a meeting in the morning, and Later joined Peter for some ringing. They had a good morning, catching Musvit, Rødhals, Grasisken, Bogfinke and Kvækerfinke.

After lunch, Dante, Joakim, Peter and I all headed back over to Grenen to drop of supplies in preperation for setting up the nets over there, where we heard a Rørdrum very close which was brilliant.! Ida and Hans meanwhile spent the afternoon exploring the old part of Skagen and then visiting Skagen itself.

After Grenen, Peter got on with some things at the obs while Joakim and Dante tried to catch the Ringdue in the garden. They didnt manage, but they did spot a couple of Sortstrubet Bynkefugl!! Meanwhile i went for a wander round the shore to the harbour to have a look at the gulls and pick up some supplies!

After a lovely dinner of soup made by Ida and Hans, Joakim and Dante headed out to try a bit of nightcatching and then we were all off to bed! 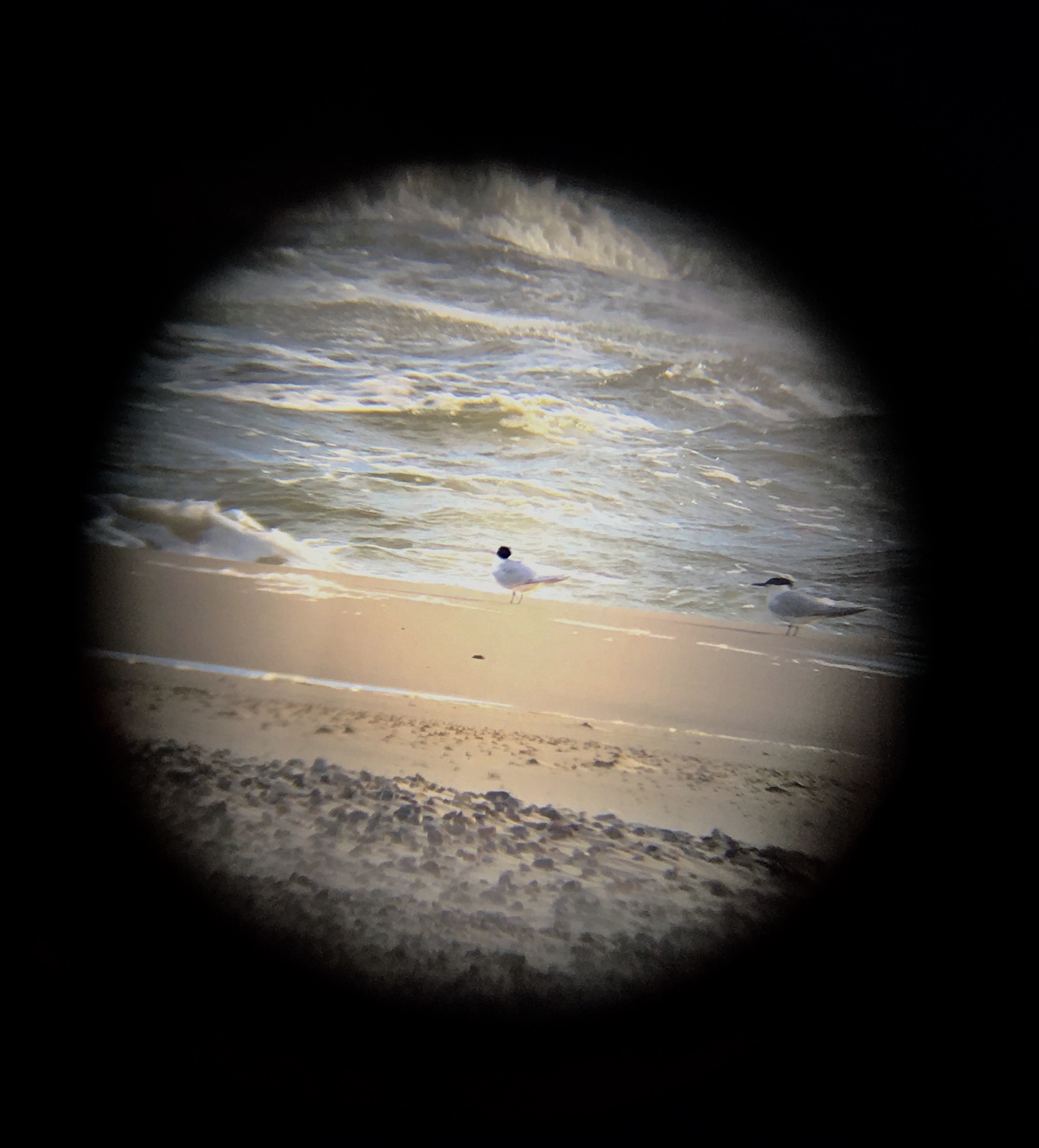 The weather was looking good so we were all up early this morning. Dante, Hebe and Joakim went up to Grenen for some observing and I opened some nets. Joakim came back early because of a rain storm and he helped scribe for me in the banding lab. Not much was caught, a few chaffinch, dunnock and redpoll but it was a fun morning and very educational for Joakim and I. As it died down, Joakim and our guests, Ida and Hans went to the cormorant colony to do the weekly count. A few more nests in the eastern part of the colony, it won’t be long before we do two visits a week and start some nest mapping.

Dante and Hebe came back midday and spent the afternoon entering DOFBasen. Joakim and I had entered and checked the ringing data. I also created some allowance spreadsheets for everyone.

Towards late afternoon, as I was busy with some personal things, everyone else went down to the harbour where they saw the glaucous gull (gråmåge) and watched some fishermen freeing a guillemot (lomvie) from some netting. They returned late and I made a mushroom pasta dish for everyone (except Hans who was allergic to mushrooms!). We then had the evening meeting and were all early to bed. 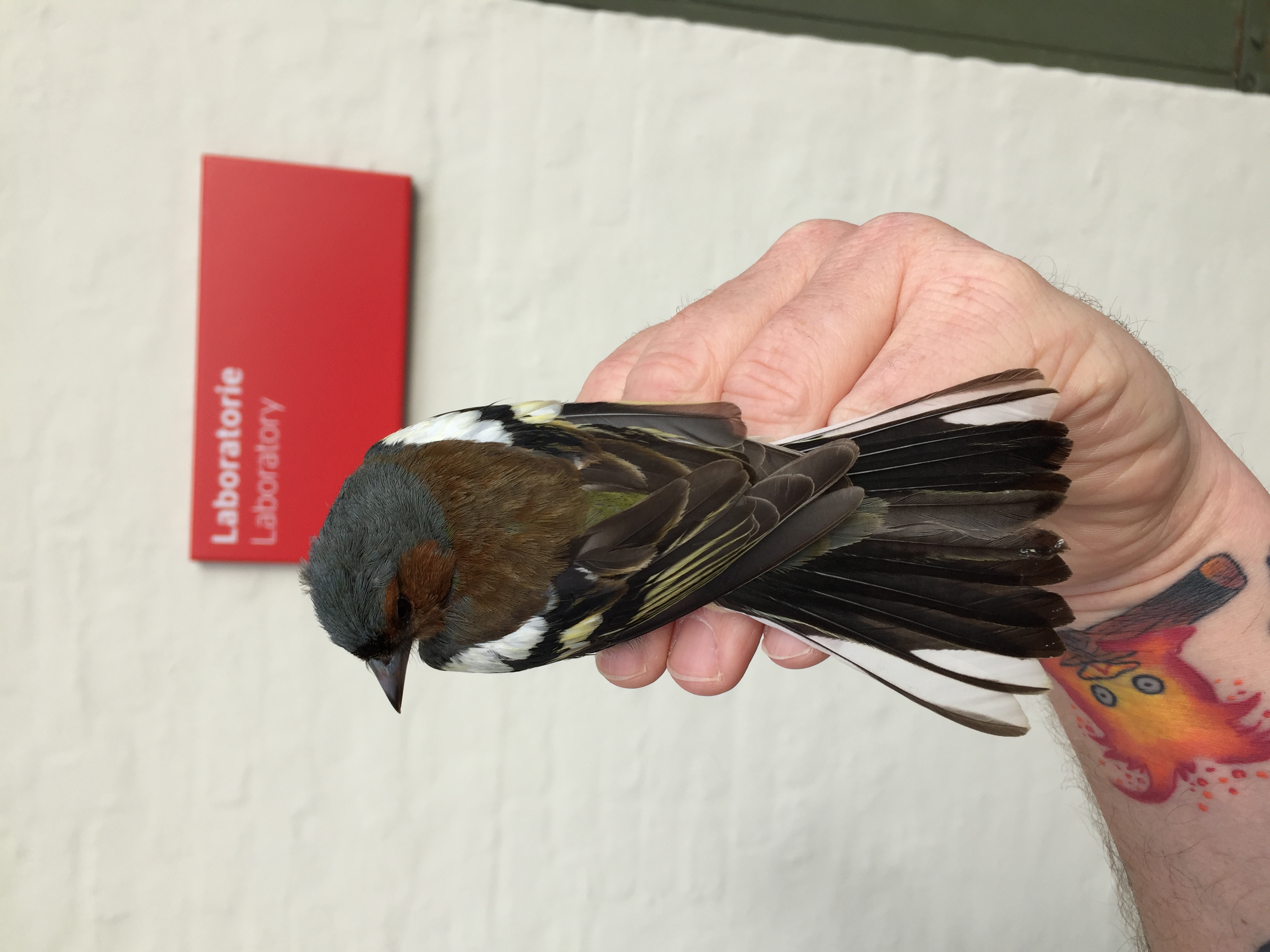 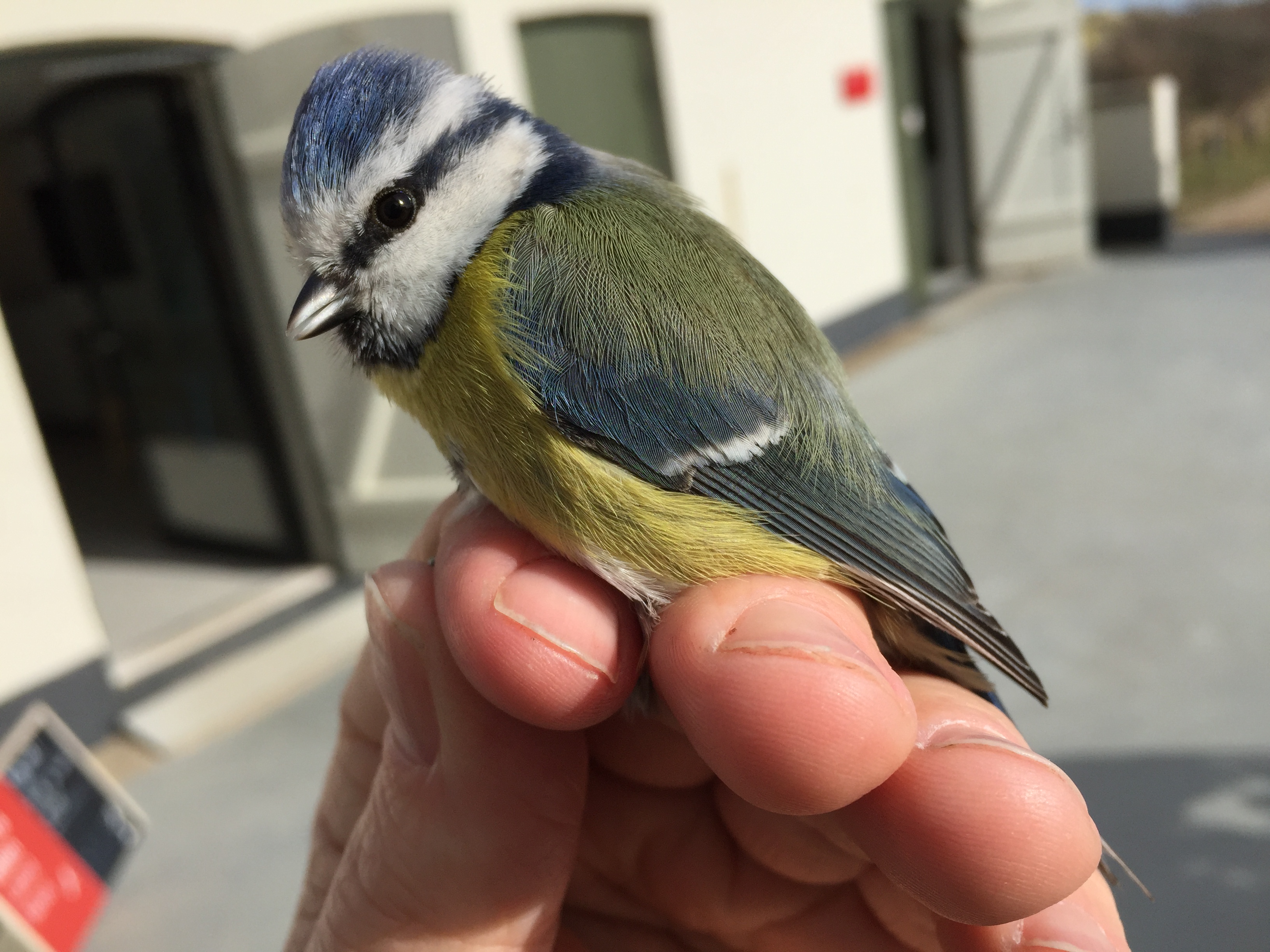 Peter was up early for a day out with friends down south to see Tengmalm’s Owl/ and Nutcracker (unfortunately it turned out he saw neither!). Hebe and I had a nice morning at Grenen with Iceland Gull and Great Skua. After lunchtime Gitte, Jens-Peder, Hebe and I took a trip to Råbjerg Mile. What an amazing place and I would never imaged such a large and migrating sand dune in northern Europe! After a quick visit to Ålbæk Harbour, which was amazing, we met up with local birder Hans (can’t remember his last name!) and did some birding in the area. It was a bit windy but we still saw Cranes, Swans, Goldeneyes and a Peregrine. Thanks again Hans!

In the evening Joakim (a new volunteer who is here for 4 months) and Nils (a board member of the observatory who had had a meeting with several people from the lighthouse/exhibition earlier in the day) arrived. Hebe and Jens-Peder cooked chicken curry for dinner and it was great. 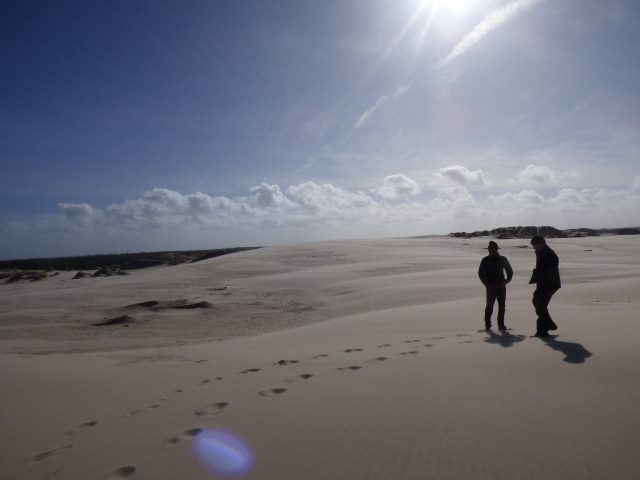 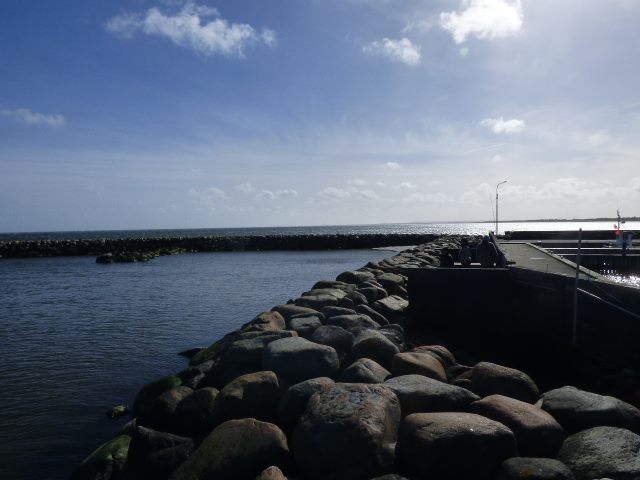 A great day for Ringmærking!

The weather was lovely this morning. Dante left  early as always, over to Grenen where he joined Rolf for the morning. At 06:15 Gitte and I headed out to Northstrand. Her company was short lived as i received a text from Peter telling us that he had birds in the nets at Fyrhaven! Gitte had been very excited for the chance to watch some ringmærking and so she hurried over to join in and scribe for Peter!  It was a really good morning for them, with 45 birds in the net!! Mainly being Grønsisken. Meanwhile, i was having a wonderful time out at Northstrand counting birds. Most excitingly for me, two groups of Halemejse!! I was also lucky to see a Porpoise and a great big bumble bee!!! LOVELY. Jens Peter who had been out for a walk, came to join me for a few hours which was great, and then we were both picked up by a very happy Gitte after the ringing was done. While we headed back to the obs, Peter went out to do a little observing too.

After some lunch, i headed out to the birders club to update the notice board, and Gitte and Jens Peter went out for a walk just as the weather turned a bit wild! Once Dante came back, he and i entered the ringing data from the morning, and did some Dofbasen. While we did this, Peter did a very long shift in the attic and finished fixing the last of the nets!!!! EPIC.

Gitte and Jens Peter had a good walk, they saw lots of Gråkrage, Skarv and Trane and also a hugorm!

We had quite a chilled evening after all of this. Jens Peter made an absolutly gorgeous dinner with crepes and all sorts of lovelieness!! yum. And so after a quick evening meeting we all went to bed. 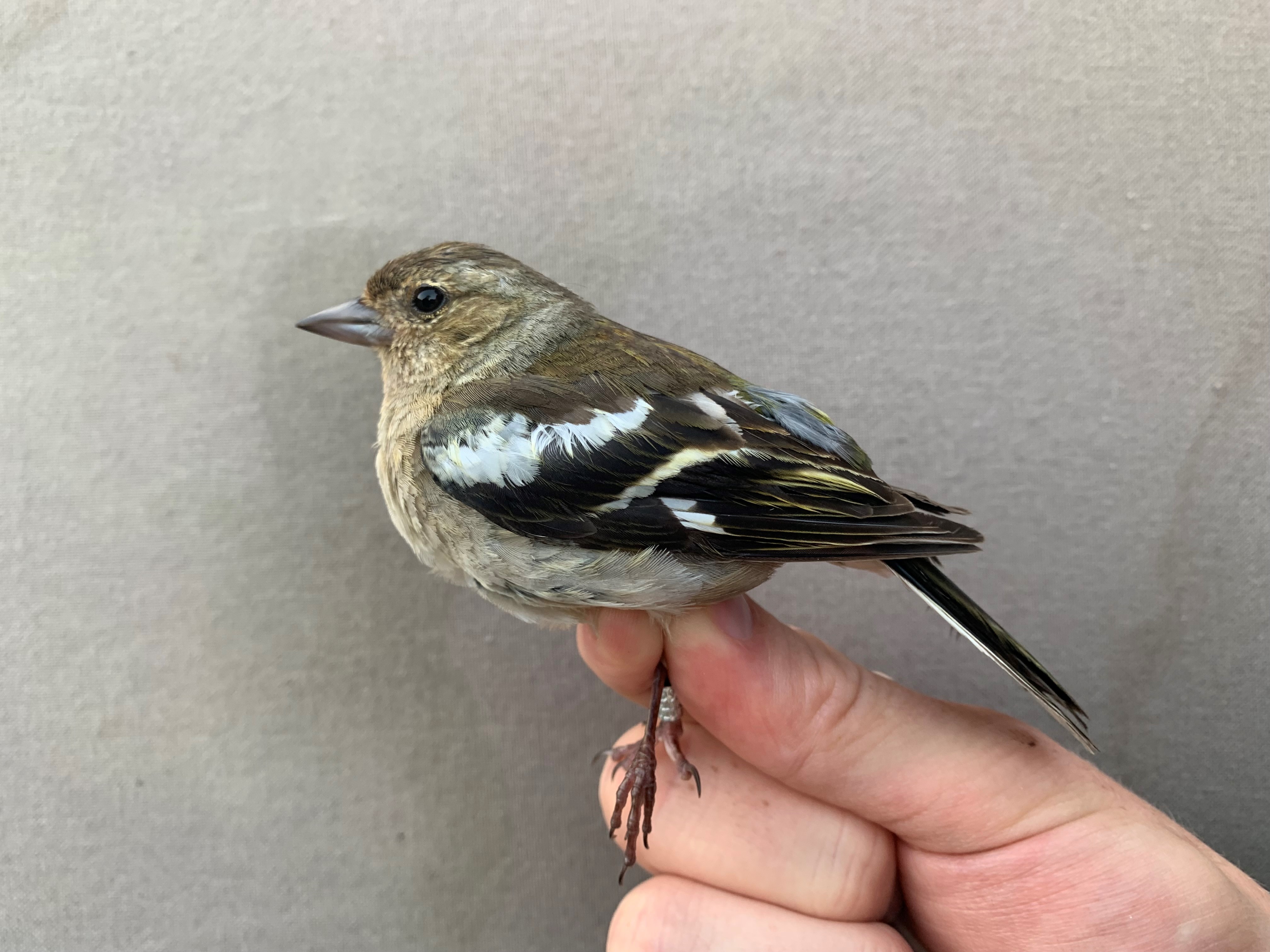 With fog I wasn’t expecting much on my daily migration count at Grenen. However I was pleasantly surprised with a Great White Egret/Sølvhejre which I found flying in off the Skagerrak. A new speceis for Hebe who had come along with me! It was too windy to open the nets back in the garden so Peter put the traps out. Annoyingly for him the birds in the garden have becom used to the traps and they all outwitted him this time. When we arrived back Gitte had baked cinnamon rolls. They were wonderful!

In the afternoon Gitte, Jens Peder and I went to the cormorant lake/skarvsøen to see how they were getting on. Not much of an increase in breeding activity compared to Mondays visit but its always nice to get out there. Whilst the others were fixing nets in the evening Gitte and I cooked bolognese and roast cauliflower. It was Simons last evening before he heads off to Israel at midday tomorrow! 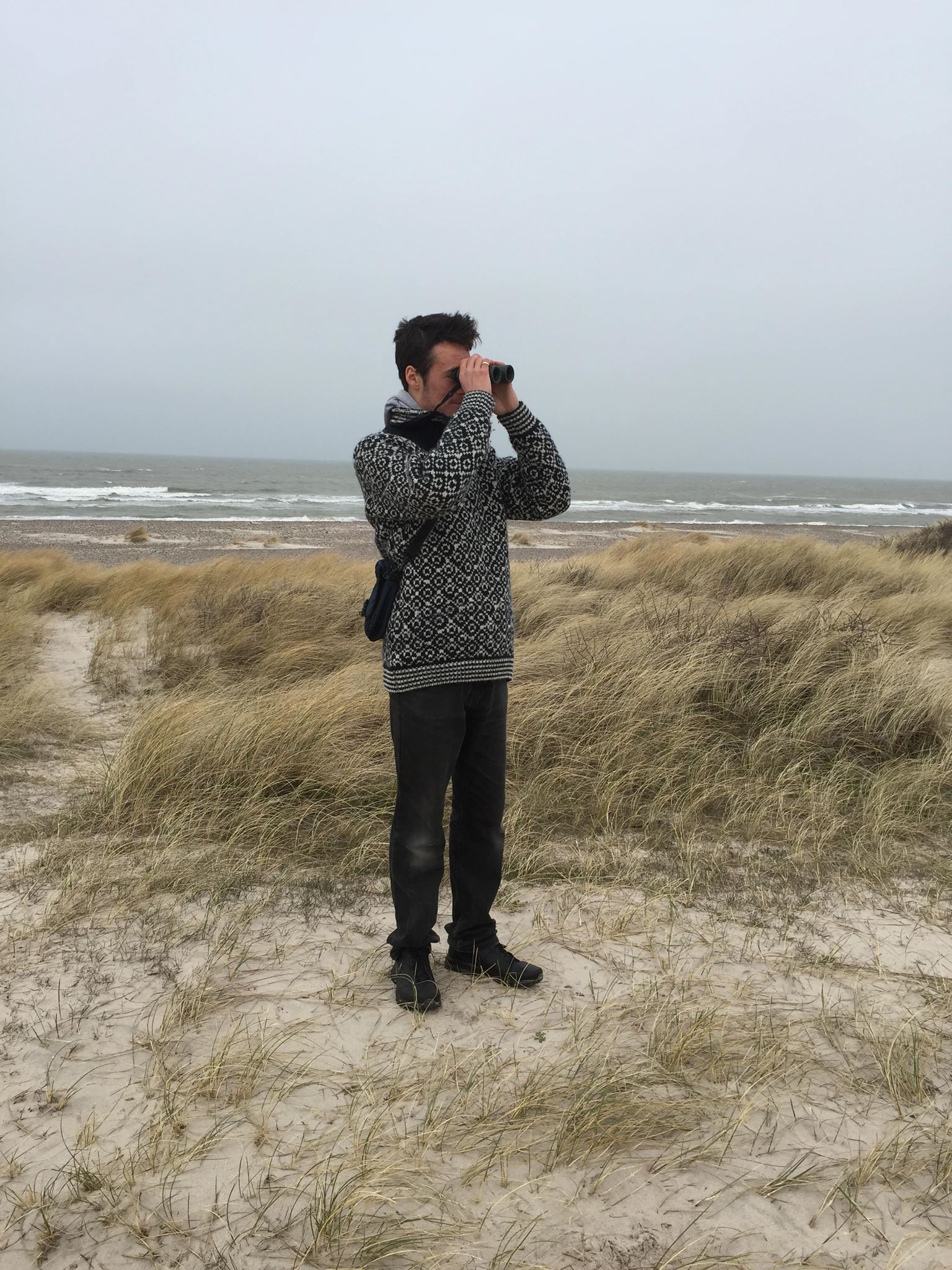 Me out near the cormorant lake